People who look at the Washington Capitals’ lineup do so and see a collection of extraordinarily skilled players. Alex Ovechkin is the most prolific goal scorer of this generation. Alexander Semin might have a more complete set of skills than Ovechkin on both sides of the puck. Mike Green has called to mind faint comparisons with Bobby Orr and Paul Coffey as a puck-rushing offensive defenseman. Nicklas Backstrom is this generation's prototypical playmaking center with the ability to see passes the average player cannot see, let alone execute.

But there is that word… “average.” And suddenly another word comes to mind and the paradox often attached to it.

In an educational setting, there are some students that by virtue of their innate intellectual abilities are deemed “gifted.” Generally they are categorized as such as a product of their respective “intellectual quotient” – the relationship of their “mental age” projected against their chronological age. We’ll leave the details to the experts in educational testing. The point is that for these “gifted” students whose mental skills are far advanced from students of similar age, a paradox often presents itself. Why do many such students often fail to achieve to a measure commensurate with their skill? Why does the child with the I.Q. of 160 earn a C- in chemistry, despite giving every indication that they can do the work with superior results?

For our purposes, why does the supremely skilled hockey player – far more skilled than other players of his age – often achieve for his team so much less than his “S.Q.” (or “skill quotient”) would allow, despite giving tantalizing indications that he can put in the effort and get the results that can earn for his team ultimate success?

Looking at the Capitals from my seat up in the balcony at Verizon Center, I see a collection of players – not just the “Young Guns” we mentioned, for there are others in this mix – who are in their own ways as much the “gifted” student as the prodigy who can perform calculus at the age of four.

Yet despite the fact that the Capitals have “achieved” a rather impressive 20 points in 14 games thus far (a 117-point pace), they have the look of the unmotivated gifted student, marking time in games in early November with the expectation, perhaps, that they’ll just turn it on for the final exam – in the form of the Stanley Cup playoffs – next spring.

Some gifted students are self-motivated out of curiosity, an internal drive to succeed, or other factors. By the same token, some gifted hockey players are self motivated out of their competitive nature, fear of failure, or other factors. Still it remains that motivating the gifted student is one of teaching’s great challenges, and motivating gifted hockey players can be one of coaching’s great challenges.

There is a lot of effort in the academic literature devoted to the issue of how to motivate the underachieving gifted student. The task in motivating the gifted professional athlete is a more difficult one in some respects. Such athletes are financially well set with early signing bonuses and large contracts. They are of course adults – chronologically. The jobs of those who manage them – coaches, general managers – largely hinge on keeping them happy and productive, something that might not be lost on the player. And there is a world of other experiences to which they can be exposed or that they can seek out that rob them of their focus on or their motivation for success on the field or on the ice.

We aren’t nearly close enough to the players to opine on whether or from what causes they might lack motivation or lose focus. But they do, at times, seem to lack it or lose it. Against teams that can challenge their skill, they can – and do – summon the motivation to succeed and focus on the task of winning. When the Capitals thoroughly dominated the Bruins in Boston in the season opener and San Jose at home two weeks later, they were the gifted students who aced the test.

Then again, against teams such as Toronto – in the home opener two days after dominating Boston – or Atlanta on two occasions, we saw the gifted student lacking the motivation to do anything but plod along with a “C+.” Losing to the Islanders or the Blue Jackets in overtime was like blowing off a pop quiz. It doesn’t really matter, well… too much, in the final grade.

We’re not prepared to call the Caps “underachievers,” not this early in the hockey season and not with the record they have. But there is the faint whiff about them that they are not, as they say, “reaching their potential.” It is a job made harder with Alex Ovechkin out of the lineup, but if motivation – either from within, or from the coaches or management – has been lacking, it should be in abundance at this point. They can’t just do the minimum required for their grade or to do some real damage in the playoffs.

The problem with that attitude – for the gifted student and player alike – is that there will be a final exam coming. For the gifted student it might be that last test of the academic year or an entrance exam to a prestigious school. For the gifted player it is the playoffs. And if one hasn’t prepared well in the meantime, then that last final exam will not go well. And in the NHL, that means a long summer of knowing you failed, knowing you have to repeat the grade the next year.

And for the professional athlete, even the gifted ones, there are a precious few years in which to achieve your success.
Posted by The Peerless at 12:48 PM 2 comments:

The Peerless Progsnoticator is ON THE AIR!!! -- Caps vs. Devils, November 4th

If it’s Wednesday, it must mean hockey, and tonight it’s a visit to The Rock in beautiful downtown, Newark, New Jersey, where the Devils will play host to the Capitals in the second meeting of the clubs this year. New Jersey won the first contest, a 3-2 Gimmick win in Washington on Columbus Day. Tonight the Caps hope to at least return the favor of being a rude guest and will do so without the pleasure of having Alex Ovechkin in the lineup. The over/under for his return from an “upper body injury” looks to be two weeks.

Are you some sort of wise guy or something?

Oh, yeah, I hear you’re some sort of diagnostic genius… So, anything to this “upper body” thing?

"That's a catchy diagnosis, you could dance to that."

Well, that seems to be the thing these days. There are more cases of that than of swine flu.

“Then just say it’s ‘idiopathic,’ from the Latin meaning we're idiots ‘cause we can't figure out what's causing it."

He got into a kerfuffle with some Columbus Blue Jackets and seems to have hurt his chest or shoulder. A weird injury.

"Weird works for me."

OK, so what do you think it is?

“Well, it could be anterior displacement of the acromioclavicular bundle.”

Will you be serious?

“I solved the case, my work is done.”

Well, perhaps Dr. House can find work as a team physician somewhere, since his diagnoses are as revealing as “upper body injury,” but what about the game the Caps have to play?

The Devils come into this one the very picture of consistency they have been for the last decade and a half. After dropping their first two games of the year, they Devils have gone three wins, a loss, three wins, a loss, and two wins for an 8-2-0 record in their last ten games and an 8-4-0 record overall (if the pattern holds, this is not good news for the Caps). They’ve done it in the accustomed way, too. In only three of those last ten games have the Devils allowed more than two goals, while scoring as many as four goals in a game only twice, themselves. Three of those games have gone to the Gimmick, the Devils winning all of them. Here is how the overall numbers compare… 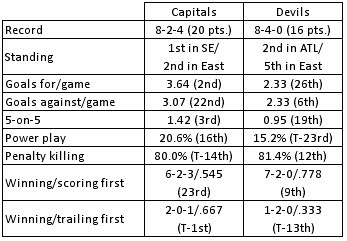 Unless the sun stops in the sky, or he is spirited away by aliens, Martin Brodeur will get the start. He will be making his fifth attempt at tying the all-time NHL shutout record for goaltenders – 103 – held by Terry Sawchuk. In four appearances since climbing to within one of Sawchuk, Brodeur is 3-1-0, 1.97, .927. In other words, pretty normal.

While the Capitals will be missing Alex Ovechkin, the Devils have been without the services of Patrik Elias for the entire season to date, the result of his having undergone surgery to clean out scar tissue in his groin. He returned to the ice for the first time on Monday, but there is no date that had yet been set for his return. Think he won’t be missed tonight? Since the lockout, he is 5-14-19, plus-5 in 13 games against Washington.

That will leave the scoring load to Zach Parise and Travis Zajac, currently one-two in the Devils scoring rankings. Parise went scoreless on opening night against Philadelphia, but since then has points in nine of 11 games (6-8-14). In 13 career games against he Caps he is 4-8-12, even. But here is the odd part. In 2006-2007, he was 2-3-5 in four games. The following year, he was 0-0-0 in four games. Last year, he was 1-4-5 in four games. This year, he failed to register a point in the first meeting. See a pattern? Let’s hope it continues.

If you were to be asked, which Devil leads his club in game-winning goals, would you have said “Jamie Langenbrunner?” Well, if you did, you’d be wrong. Dainius Zubrus is the only Devil with as many as two game-winners, which happens to match the number of goals he has for the season of any variety.

In the prognosto for the last Devils game, we made the point that the Devils’ defensemen don’t score and don’t hit, but they play smart. Well, there is one Devils defenseman who is struggling, and that would be Johnny Oduya. Last year, Oduya had his coming out party, finishing the year 7-22-29, plus-21 while playing in all 82 games. Well, it’s a new year, and it seems to be a wall that Oduya has hit. In 11 games so far he has yet to register a point and is a minus-5.

1. Score first. Combined, these teams have allowed the first goal of a game only six times in 26 games.

2. Kill penalties. The Devils have had, well, a devil of a time with their power play. In their last eight games they are 2-for-27 (7.4 percent).

3. Step up. The Caps’ blogosphere is awash with commentary about how the absence of Alex Ovechkin gives others the opportunity to step up. We’re tempted to say that this means guys like Nicklas Backstrom or Alexander Semin will be key in this one. Well, probably not. Brodeur has a way of making life difficult for high-end skill guys if he’s getting good looks at pucks. Nope, think “traffic.” Brooks Laich and Mike Knuble might be the keys here.

You might be thinking “Devils” and concluding that this will be a low scoring affair. Well, the Caps scored five goals in two of the last three games against New Jersey. That was with Scott Clemmensen in goal, not Martin Brodeur. So, chances are that three goals wins this game. That sounds about right.