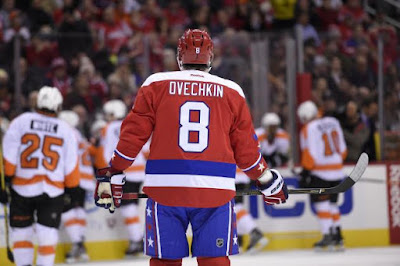 Well, here we are.  We are Dorothy putting the toe of our ruby slippers on the first stone of the Yellow Brick Road to the Stanley Cup.  We are Captain James Tiberius Kirk going where no one has gone before (yet) this season…the first game of the first round of the 2016 Stanley Cup playoffs.  OK, technically, there will have been games already played by the time the Washington Capitals an Philadelphia Flyers take the ice for Game 1 of the Eastern Conference Quarterfinals, but before they do, it is time to fill in the last frame of our conference prognostos…

When the Philadelphia Flyers defeated the New York Islanders in Brooklyn last Sunday in the season finale, the win gave the Flyers 96 points for the season.  The Washington Capitals hit that points mark on March 1st, when they defeated the Penguins in Game 62 of an 82-game season.  That, in a nutshell, is the difference between these teams as they prepare to meet in the first round of the playoffs on Thursday night.  The Caps ran away from the field, the Flyers had to beat it back with a stick in the last six weeks.

You would think that the Caps, with a 24-standings point edge over the Flyers for the season, would be prohibitive favorites to beat the Flyers.  Well, lets’ hold off on that for a moment.  Why?  Well, because…

The Capitals have been here before

Going into the dim past is of dubious value when considering players whose professional careers extend back only so many years.  But the Caps have had bigger standings points edges over a playoff opponent and lost.  There was 1986, when the Caps went into the Patrick Division final against a New York Rangers team that finished 29 points behind the Caps in the regular season.  The Caps lost in six games.  There was the 2010 squad that finished 33 points ahead of the Montreal Canadiens that lost to the Habs in seven games in the conference quarterfinal.  Don’t say it can’t happen, because it can, and if there is a team to which it can happen, it is the Capitals.  But then again…

Here is why it won’t happen to them

There is no team in the league that can beat you in as many ways from as many directions as the Caps.  Shut one part of their game down, another rises up more often than not.

Since he came into the league, Alex Ovechkin has seven 50-goal seasons.  If you add up all the other 50-goal seasons among players active in 2015-2016, you get a total of eight, and only Steven Stamkos has done it twice.  In terms of total goals, he has a lead of more than 160 goals over his closest pursuer (525 to 361 for Jarome Iginla).  He is a force of nature when it comes to goal scoring.  But to the point at hand, Ovechkin has two goals in four games against the Flyers this season, one goal in each of the two most recent games played between the clubs.  He had a rough patch as the season was winding down, scoring just three goals in 15 games over four weeks ending on March 28th.  But he picked up the pace in a big way in the season’s last two weeks, scoring seven goals in his last six games, including a hat trick in his last game of the season, giving him that seventh 50-goal season.  If this is an indicator of a hot streak, it is coming at the right time.

But the Flyers have…Claude Giroux

Not so long ago, Claude Giroux was touted as the best player in the world.  OK, so it was his coach doing the touting, but the point is that Giroux was once on a very short list of the very best players in hockey.  Since that season in which his coach provided his flattering commentary, one in which he set career highs in goals, assists, and points, Giroux’ performance numbers have fallen off.  Part of that is undoubtedly tied to the general contraction of scoring in the NHL, part of it might be a product of having less talented teammates.  But Giroux’ numbers over the past few years do not argue for his inclusion in the discussion of the league’s (or the world’s) “best” player.

This is not to say he lacks talent, is in decline, or cannot influence the direction of a game or a playoff series.  He remains a gifted player (he did finish in the top-20 in both assists and points this season).  But if anything, his ten-game segments suggest a bit of a dropping off in his production.  In his fifth segment this season (Games 41-50) he went 4-10-15, plus five.  In the segments that followed he was 1-9-10, minus-5; 4-4-8, plus-3; and he was 1-4-5, minus-2 in his last eight games (he played 78 games this season).  Whether he can improve on this in a seven-game series could say a lot about the Flyers’ chances.

Then there is the season series…

The Caps won two games in regulation, with teams playing 5-on-5 and with the normal deployment on power plays.  On the other hand, the Flyers won one game at 3-on-3 and another in a Gimmick, neither of which we will see in the postseason (unless things go haywire and there are a lot of players in the penalty boxes to create a 3-on-3 situation).

Drill down, and it does not get better for the Flyers.  The Caps won the 5-on-5 possession battle in all four games and posted a Corsi-for of 52.4 percent over the series.  The goal scoring tracked with this as well, the Caps winning three of the four games in goal differential at 5-on-5 and tying the Flyers in the other, winning overall by a 9-5 margin (numbers from war-on-ice.com).

But aren’t you leaving the most important players out?

Oh, the goalies.  The Caps have this theme that permeates their entire playoff history – the “hot goalie.”  Just about any series you look at back through time, you could say the “hot goalie” did them in, whether it was Kelly Hrudey saving eight thousand shots in a four-overtime game on Easter Morning way back when, or Jaroslav Halak channeling his inner Patrick Roy over a three-game stretch a few years back to send the Caps packing, there has always been the “hot goalie.”

Braden Holtby’s profile is considerably different.  Holtby’s season overall has a much broader sweep to it.  He started slowly in terms of personal efficiency, his save percentage over his first ten games a decent, but not extraordinary .916.  He enjoyed low shot volumes (24.9 per game) that kept his goals against average at a very good 2.12.  The save percentage jumped spectacularly over his next two ten-game segments (.937, .947), and his GAA plummeted (1.79, 1.66).

If there is a shot threshold for Holtby, it certainly is an odd one.  Holtby was 38-5-7, 2.14, .928, with two shutouts in 50 games in which he faced more than 20 shots.  In 16 games in which he faced 20 or fewer shots he was 10-4-0, 2.43, .894, with one shutout.  Even if you remove the games in which he was relieved by Philipp Grubauer, his save percentage was only .909 over 12 full games facing 20 or fewer shots.  Whether that is a product of low-chance shots not getting through or the goaltender losing focus, or sunspots in low shot volume games, Holtby does not suffer when the workload is heavy.

Is there an “X-Factor” for either team?

For the Flyers, the obvious candidate here is defenseman Shayne Gostisbehere.  Despite the fact that he finished 11th in games played among rookie defensemen (64), “Ghost” finished first among that cohort by a wide margin in goals (17, to nine for St. Louis Colton Parayko), assists (29, to 24 for Parayko and Vancouver’s Ben Hutton), points (46, to 22 for Parayko), power play goals (eight, to three for Parayko), power play points (22, to seven for Parayko, Hutton, and Carolina’s Noah Hanafin), and overtime goals (the only four OT goals scored by a rookie defenseman this season).

The question about Gostisbehere is, after 64 games of action averaging more than 20 minutes a game for a defenseman of slight stature, if he is slowing down from the grind.  Consider that he had a 13-game streak without a goal before he potted a power play goal against the New York Islanders in the season finale last Sunday.  He does have six assists in those same final 14 games, so he is continuing to contribute.  On the other hand, he was a minus-9 over 11 games before going plus-5 in his last three contests.  If, however, he is getting a second wind, he could present problems for the Capitals.  Gostisbehere was 0-3-3, even, in three games against the Caps this season.

For the Capitals, it might be a guy who appeared in only two games in the season series.  Jay Beagle missed 25 games this season, including the middle two games of the season series between these two teams.  But in those two games Beagle won 22 of 33 faceoffs (66.7 percent).  Faceoffs are generally considered one of those mundane tasks that do not have much of an effect on games…until you lose a critical one.  Like the one the Caps lost that led directly to the game-winning, series-clinching overtime goal in last year’s playoff series against the New York Rangers.  Beagle and Mike Richards led Caps forwards still with the team in shorthanded ice time.  Beagle taking draws in his own end on the Flyer power play is a responsibility that should not be held as insignificant in this series.

The Flyers went 15-5-3 in their last 23 games for 33 standings points.  On the other hand, the Caps had 60 23-game windows for the season, if you look at them on a rolling basis.  Of those 60 rolling windows, 11 of them failed to reach the 33-point mark, nine of them coming at the end of the season when the Caps had clinched their position in the standings.

It is in that sense that we look at the Flyers’ end-of-year performance as a “ceiling” and that of the Caps as a “floor.”  It leaves us thinking that any argument making the Flyers a favorite in this series is misguided.  The Caps have advantages of depth of skill, goaltending, and they performed better overall in head-to-head matchups with the Flyers at even strength.  Even with their late-season swoon, the Caps underlying numbers appear to be improving.  The Flyers can make a series of this, perhaps only if they make it a mud-wrestling contest in which they can goad the Caps into taking more penalties (they had 17 power plays to 10 for the Caps in the regular season).  Still, actually winning it is a hill too high to climb for the Flyers.