Here they are, the last prognostos you will ever need...or want, we dare say: 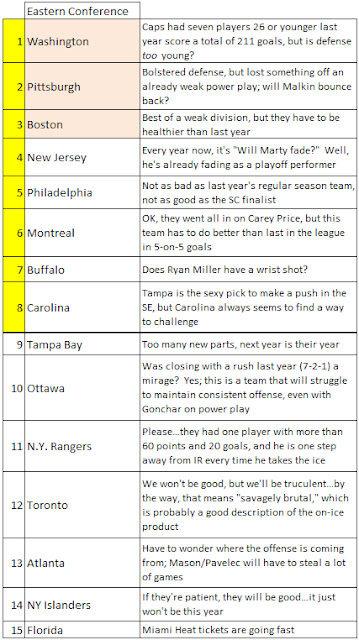 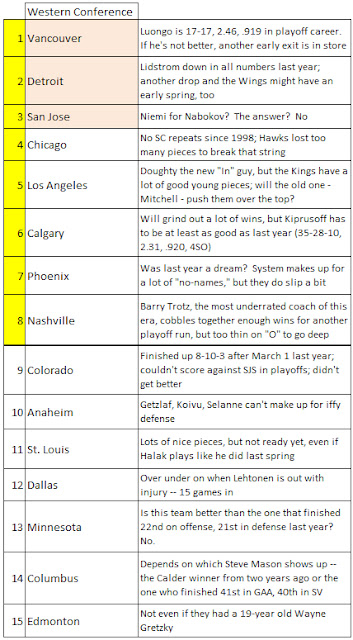 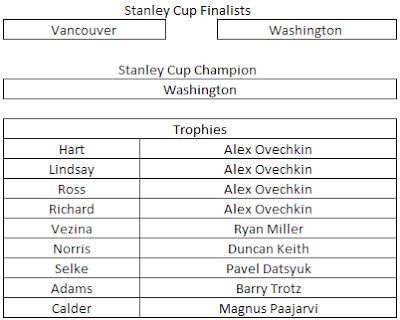 They Need a Name

Seems the twitterverse is crackling today with the idea that the "Young Guns" of yore -- Alex Ovechkin, Alexander Semin, Nicklas Backstrom, and Mike Green -- are not so young anymore (not with John Carlson, Karl Alzner, Marcus Johansson, and Michal Neuvirth yapping at their heels).  So, guess it's time for a new name...


The Four Icemen of the Capocalypse 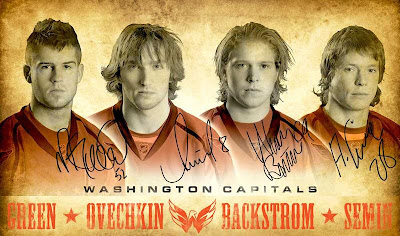 "Outlined against a brilliant white ice sheet, the Four Icemen skate again. In dramatic lore their names are Death, Destruction, Pestilence, and Famine. But those are aliases. Their real names are: Ovechkin, Backstrom, Semin, and Green.  They formed the crest of a wave before which another NHL team was swept away in a cloud of ice spray as 18,277 red-clad spectators of Capitals Nation peered down upon the bewildering panorama spread out upon the ice sheet below."

With apologies to Grantland Rice
Posted by The Peerless at 11:30 AM 1 comment:

'Twas the Night Before the Opener

'Twas the night before the opener, when up on the roof
The Capitals were practicing; no time to goof
The drills would be run on the ice with such care,
In hopes that a big year would be started from there;
The Caps were determined, the Coaches were, too
While hoping their Cup dreams would finally come true;
Alex in yellow laces, Poti with a new shield,
Just two of the weapons, the Capitals could wield
When down in the tunnel there arose such a clatter,
The boys turned around to see what was the matter.
Away to the boards ev’ry player would dash,
Then leaned on the rail, all except “Flash;”*
The lights shining bright on the re-surfaced ice
It was time to get started, no playing nice.
When, what to their wondering eyes came out of thin air,
But a coach in a red suit, and not too much hair.
With a smile that made him look like a silly old goose,
The players just knew, it had to be Bruce.
More rapid than eagles his players they came,
And he whistled, and shouted, and called them by name;
"Now, Brooksie! now, Fehrsie! now, Greenie and Nicky!
Let’s practice hard, and not be so tricky.
To the top of the circle! To the end of the wall!
Now dash away! dash away! dash away all!"
As dry leaves that before the wild hurricane fly,
When they meet with an obstacle, mount to the sky,
So off on their drills the players they flew,
With smiles on their faces, and Coach Boudreau too.
And then, in a twinkling, I heard the whistle blow
The players were skating with a hard steady flow.
As I stood by the glass, peering into the rink,
I could swear that Coach Boudreau gave me a wink.
He was dressed all in red, from his head to his foot,
It was hard not to chuckle, he was such a hoot;
A red baseball cap perched on top of his head;
And he looked like an elf (just a bit more well fed).
His eyes -- how they twinkled! his dimples how merry!
His cheeks were like roses, his nose like a cherry!
His droll little mouth was drawn up like a bow,
And the hair he had left was white as the snow;
The old taped-up stick that he held in his hand,
Was just the right touch to make him look oh-so-grand;
He had a broad face that was once in a movie,
And now does commercials – hey, that’s so groovy.
He was chubby and plump, a right jolly old elf,
And I laughed when I saw him, in spite of myself;
A wink of his eye and a twist of his head,
Soon gave me to know I had nothing to dread;
He spoke not a word, but went straight to his work,
Watching all of the players; then turned with a jerk,
And then with a smile that looked so sublime,
He blew the last whistle; now it was time;
He sprang off the ice, his coaches right behind,
The players on the ice, just a moment to unwind.
But I heard him exclaim, as they picked themselves up,
"Tomorrow’s the first step to our first Stanley Cup! "
*  He was last one in, so he had to do a lap
s/t to Japers’ Rink for the inspiration
Posted by The Peerless at 9:00 AM No comments: