The Peerless Prognosticator is ON THE AIR!!! -- Game 66: Capitals at Ducks, March 6th

The Washington Capitals take to the road this week on their annual California trip, visiting Anaheim, Los Angeles and San Jose over the next five days, a trip that could have considerable influence on the standings in two divisions – the Metropolitan, where only three points separate the first-place Capitals and the third-place Pittsburgh Penguins on Monday morning, and in the Pacific Division, where only two points separate the three teams the Caps will play this week.

The Caps will visit the Anaheim Ducks to open this three game trip, hoping to extend a winning streak to a third game for the first time since they beat the Carolina Hurricanes on January 2nd in the third straight of what would be a five-game winning streak.  It will be a challenge.  When the Ducks beat the Chicago Blackhawks, 6-3, on Sunday night, it brought their record over their last dozen games to 8-2-2.

The Ducks’ success in their last dozen games has been more a product of defense, having allowed more than two goals in regulation time only twice – a 6-5 Gimmick loss to Edmonton on February 25th and last night’s win over Chicago.  One might think that would reflect well on a goaltender, but both Ducks goalies have fine numbers over those dozen games.  John Gibson started eight of those games and is 6-1-1, 1.93, .942 in that span.  Gibson has established himself as one of those goalies with fine numbers that not a lot of folks know about.  At the moment, he has a career best .925 save percentage this season, fifth-best in the league among 35 goalies with at least 1,500 minutes played.  It is the third consecutive season in which Gibson has posted save percentages of .920 or better. And, he has been consistent.  Over his last 20 appearances, Gibson has not had consecutive games in which his save percentage was under .920.  In four career appearances against the Caps, he is 0-2-2, 3.45, .888.

The Ducks have not been especially prolific in the offensive end lately, scoring 34 goals in the 8-2-2- run (2.83 per game).  Rickard Rakell has six of those goals to lead the club.  It is no surprise, since Rakell leads – and by a substantial margin – the team in goals scored this season (27, ten more than Ondrej Kase).  Rakell can score goals in bunches.  He has four multi-goal games this season, including a hat trick in the 6-5 trick shot loss to Edmonton on February 25th.  Rakell’s recent production gives him a total of 26 goals this season and puts him on a pace to challenge his career best in goals scored (33) set last season.   In six career games against Washington, he is 1-0-1, minus-2.

Anaheim gets good production from its back line, four defensemen with more than 20 points this season, all of them with at least five goals scored.  Hampus Lindholm leads the group with nine goals.  He has developed nicely for the Ducks since he was taken with the sixth overall pick in the 2012 entry draft.  After a rookie season in 2013-2014 which he went 6-24-30, plus-29, and finished seventh in the Calder Trophy voting for top rookie, he posted a career best 34 points the following season.  He slipped under 30 points the last two seasons, but his nine goals so far this year are just one short of his career best (10 in 2015-2016).  He had done it by being efficient.  Nine goals on 100 shots – 9.0 percent – is tied for first with New Jersey’s Damon Severson (also with nine goals on 100 shots) among 72 defensemen with at least 100 shots this season.  He has been particularly effective against the Caps, going 2-6-8, plus-9, in nine career games against Washington. 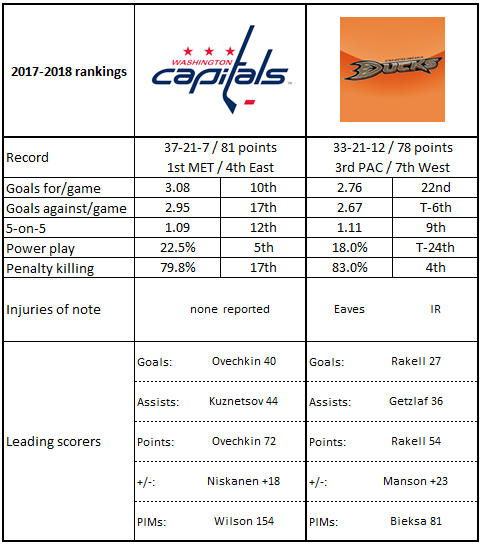 1.  No team has been in the freestyle competition more than Anaheim this season.  So far, 11 of their 66 games have been decided in the shootout.  It should not be surprising (if not pleasant for Ducks fans) that no team has lost as often in the trick shot phase, the Ducks having seven losses.  Their problem is two-fold.  They don’t shoot well (13-for-50/26.0 percent/ranked 23rd in shooting percentage), and they don’t stop shots well (34-for-52/.654 save percentage/ranked 21st).  Three of their last seven home games have been decided in the Gimmick (1-2 record).

2.  Anaheim ranks fourth in the league in penalty minutes per game (10:37), and no team has been whistled for more total penalties (295) or more minor penalties (258).

3.  One thing Anaheim does not do is out-shoot opponents.  They have done so only 19 times in 66 games, and even when they do, their record lacks accomplishment (8-9-2).

4.  Another thing the Ducks don’t do is lose one-goal games in regulation.  They only have three one-goal losses in 60-minute games this season.  Only the Boston Bruins have fewer (two, one of them to the Caps).  However, they can be caught in regulation.  Six of their 12 losses in extra time came in games in which they led at the second intermission.

5.  Anaheim suffers a similar problem as do the Capitals in that they are not a very efficient possession team.  Their shot attempts-for at 5-on-5 percentage (48.29) ranks 22nd in the league, 24th when ahead in games (44.60; numbers from NHL.com).

1.  The Caps have played 23 games against Western Conference teams so far this season to a 12-9-2 record.  They have been out-shot by exactly 100 shots (754-654).  They will be looking to improve their record against Pacific Division teams on this trip over their current .500 mark based on standings points earned/available (6-6-1).

3.  One of the problems with the power play against the West might be not having the puck, at least to begin power plays or after play stops.  The Caps are the only Metro team whose faceoff percentage on power plays is under 50 percent (56-for-119/47.1 percent).

5.  Four of 13 games played by the Caps against the Pacific Division this season have gone to extra time.  The Caps are the only Metro team to record two overtime goals against Pacific Division teams.  One came against Anaheim in the Caps’ 3-2 win at Capital One Arena on December 16th.

There have been 113 defensemen to dress for the Anaheim Ducks since they came into the league in 1993-1994 as the Mighty Ducks of Anaheim.  Only Ruslan Salei (594) and Francois Beauchemin (577) have appeared in more games as a Duck than Cam Fowler (548).  Fowler has been among the more consistent offensive defensemen in the NHL since he was taken by the Ducks with the tenth overall pick in the 2010 entry draft.  In six full seasons with the club before this year (not including the abbreviated 2012-2013 season), Fowler never finished with fewer than 28 points, and that came in a 69-game season (2015-2016) in which he missed 13 games to a sprained knee.  He ranks third all-time in goals for the franchise (53) and second in points (246), trailing only Scott Niedermayer (264).  He leads the team in blueline scoring this season (29 points).  Fowler does not have a goal against Washington in his career, all seven of his points in 11 career games coming on assists.  He is also a minus-9 in his career against the Caps, the only worse number being minus-11 in 27 games against the Dallas Stars.

It might sound strange to say of a Western Conference team, but Alex Ovechkin has a history against the Anaheim Ducks.  He recorded his first career hat trick against the Ducks in 2006, scoring all of the Caps’ goals and the hat trick goal coming in overtime in a 3-2 win.  He has points in 11 of the 15 games he skated against the Ducks.  He was famously benched late in a one-goal game against the Ducks in November 2011 as the Caps were trying for the tying goal in the last minute of regulation (they got it, courtesy of Nicklas Backstrom, and won a 5-4 decision in overtime on another Backstrom goal).  This season, it was Ovechkin who scored the overtime game winner back in December in the Caps’ 3-2 win over the Ducks.  And when Ovechkin scores against this team, the Caps win; the Caps are 7-0-0 in the games against the Duck in which he scored at least one goal.  He has a chance to make more history at the expense of the Ducks as he inches toward his 600th career goal, two goals short going into this game.  Overall, Ovechkin is 10-13-23, minus-3, in 15 career games against Anaheim.

Big trip, big games.  The Caps will be in first place in the Metropolitan Division at the end of this game, no matter what, given who plays and who is idle, but a win would be welcome as the Caps make up the game in hand they have on the Philadelphia Flyers, currently in second place two points behind Washington.  This might be the best team of the three California teams to open against on this road trip, the Caps enjoying an 8-7-1 all-time edge against the Ducks in California with six wins in their last seven trips to Anaheim (although they did get pasted, 5-0, in their last visit there).  Given Anaheim’s defensive emphasis in their most recent run of success, goals might be difficult to come by in this game, which means playing smart and avoiding mistakes, a couple of things that the Caps have not consistently avoided this season.