The Peerless Prognosticator is ON THE AIR!!! -- Game 45: Capitals at Flyers, April 17

The Washington Capitals try to shake the stench off their 5-2 loss to the lowly Buffalo Sabres on Thursday when they travel to Philadelphia to meet the sinking Flyers in a 12:30 start at Wells Fargo Center.  The Flyers return home after splitting a two-game road trip, a 6-1 loss to the Caps in Washington and a 2-1 Gimmick win over the Penguins in Pittsburgh.

These teams are playing their second game in five days, so we are going to provide you with nuggets (not the last minute McNugget kind, which seems to have become a thing for Caps games) to amaze your friends and confound your enemies… 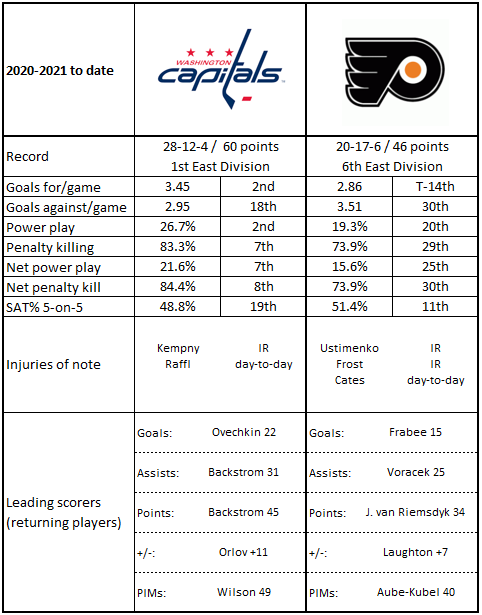 -- Home ice has meant little to the Flyers this season.  After going 5-1-0 at Wells Fargo Center to start the season, the Flyers are 4-8-3 in their last 15 games at home.  That is the fourth-worst home record in the league since February 1st.

-- The Flyers have gone seven straight games on home ice without scoring more than three goals.  They haven’t scored more than three goals in a regulation win since February 24th (4-3 over the New York Rangers).  Since then, they scored four goals on home ice twice, once in a 5-4 Gimmick win over Buffalo on March 9th and again in a 5-4 loss to the Caps on March 13th.

-- The Caps have scored four or more goals in seven of their last ten road games and have outscored opponents, 41-30 over those ten games.

-- The Flyers scored seven goals in the first game of the season series against the Caps (a 7-4 win).  They scored only nine goals in the last four meetings between the clubs.

-- The Caps have scored five or more goals in each of the last three games against the Flyers, all in wins.

-- Ten of 24 skaters to dress against the Caps this season have goals.  Scott Laughton has a quarter of the 16 goals scored by that group (four) to lead the team.  Eighteen skaters have points, led by Sean Couturier (seven).

-- If Alex Ovechkin gets the game winning goal, he will tie Peter Bondra as the all-time leader in game-winning goals against the Flyers in Caps history (five).  If Nicklas Backstrom gets it, he will tie Ovechkin, Mike Ridley, and Kelly Miller for second place (four).

-- With two penalty minutes, Tom Wilson would pass Craig Berube (97) for fifth place on the all-time list of Capitals penalty minutes against the Flyers.  Four, and he would become the fifth player to reach the 100 penalty minutes mark as a Capital against Philadelphia.

-- Ilya Samsonov has the best save percentage in Caps history against the Flyers (.932; minimum: 250 minutes).

-- Only one goalie in Flyers history has ten or more wins against the Caps (Ron Hextall: 25). Then again, he appeared in almost three times as many games against the Caps (44) as the next goalie on the wins list (Pelle Lindbergh, eight wins in 16 games).

-- From the wayback trivia machine… Wayne Stephenson, who finished his NHL career as a Capital, is the only goalie ever to appear in at least five games against the Caps and post a perfect record (7-0-0).  Not even Ken Dryden did it, when the Montreal Canadiens were perennial Stanley Cup contenders, and the Caps were perennial…well, something else.  But he came close (19-0-1).

Perhaps all the pre-game attention on Nicklas Backstrom’s 1,000th game was a distraction for the Caps in their 5-2 loss.  Perhaps it was not taking a weaker opponent as seriously as they should.  Perhaps it was just a bad night; it happens, even in a 56-game season.  Whatever the reason, recent history would suggest that the Flyers are a club against which the Caps can get well quickly.  But nothing is assumed at this level, and doing it two games in a row would be four points too many left on the table against teams the Caps have to beat as they prepare for a difficult stretch run after this game in which they face playoff eligible teams seven times in their last 11 games.