Sittin' 'Round the Summer Campfire, Part One 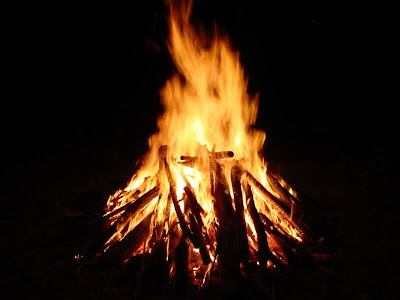 We took some time off recently and headed to the far north woods with two of the wisest hockey pundits in North America to talk about the summer, the upcoming season, and life in general.

No, not Pierre McGuire and Mike Milbury… our own cousins, Fearless and Cheerless. We’ll try and convey to you some of the conversation. Just keep in mind, there was a lot of beer involved…
Well, guys, here we are in the middle of nowhere…

No, Cheerless, it’s just a figure of speech… we’re here in the middle of nowhere, with no cell phones, no BlackBerrys, no text messaging, no Twitter… FEARLESS!

“Uh, sorry, cuz… I just had to tweet about what we were doing…”

Gimme that!... –skip-skip-skip-ploop…-- there, that’ll take care of that. You don’t have any gadgets with you, do you, Fearless?

“No, cuz… I thought Twitter was a defenseman playing for the Islanders.”

Now… where were we? Oh, yeah… out here in the great outdoors, nothing but the clear starry night, a campfire, and…

Yeah, beer… but hey, I haven’t seen you guys since the Penguins knocked the Caps out of the playoffs.

“They did? Shoot, I thought that was just some dream I had when I got after a few too many PBRs…”

No, Cheerless, they did knock out our Caps. What, you don’t know that Sergei Fedorov and Viktor Kozlov signed to play in Russia?

… was signed by the Rangers.

“Now hold on, Cheerless, we got Mike Knuble.”

Guys, guys… let’s get a grip. It’s been a busy summer. What do you think of the Caps signing Brendan Morrison?

“Well, the Caps lead the league in Morrison’s.”

“They have Brendan, too?...They have all the Morrison’s in the league!”

Guys… can he play? He missed 43 games two seasons ago, but on the other hand, in the other seven seasons combined, he missed one game. In seven full seasons, not including that injury-shortened one, he’s had at least 16 goals in all of them and at least 31 assists in all of them until last year, when he finished with 15 helpers, split between the Ducks and the Stars. Over his career, he’s averaged 19-36-55, +6, five power play goals, and four game-winners per 82 games played.

“You do all that math in your head, cuz?”

“Well, Sergei Fedorov and Michael Nylander – combined – were 20-46-66, +4, with six power play goals and four game-winners. If Morrison just has an average year, he’s in the neighborhood.”

“Cuz, not to wet all over your good time, but did you know that since the 2002-2003 season, his points on an 82 game basis has decreased in just about every season? The only one it didn’t, he got hurt.”

“Yeah, if he’s healthy, and if he can find a right wing to play with on that second line.”

Speaking of which, assuming Knuble is on the right wing on the top line, who gets that second slot?

You look like you’re on your second six-pack, Cheerless.

Well, everyone needs their own training camp, I guess… we’ll get back to that second line right wing. But what about Knuble. Think he’ll make a difference?

“Did you forget Steve Konowalchuk?”

"Yeah, I was up there once… loved that Skloosh ride…"