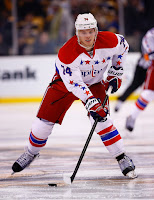 John Carlson has played five full seasons in the National Hockey League, and his progress has trended upward through each of those five seasons.  His goals per game has improved from 0.09 per game to 0.15, assists from 0.37 to 0.52, points from 0.45 to 0.67, shots on goal from 1.76 to 2.35.  He is one of only seven skaters to have played in every game over those five seasons and one of only three defensemen to do so (Keith Yandle and teammate Karl Alzner being the others). 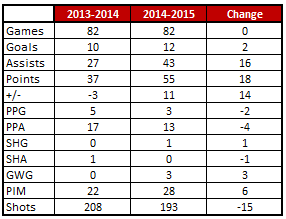 Fearless’ Take: Carlson’s year-to-year improvement in his offensive numbers is substantial.  Goals up from 10 to 12, assists up from 27 to 43, points up from 37 to 55, plus-minus from minus-3 to plus-11.  He has quietly become one of the most productive offensive defensemen in the game.  Over the last two seasons, Carlson is one of five defensemen to have recorded 20 or more total goals and 70 or more total assists.  The others read like an all-star team top four: Erik Karlsson, P.K. Subban, Victor Hedman, and Mark Giordano.

Cheerless’ Take:  John Carlson can scare up some pretty nice efforts against elite players, but sometimes he ends up being victimized by middle-of-the-pack players or the odd lost second or two of focus.  Carlson skated more than 35 minutes at even strength against Sidney Crosby this past season, and Crosby did not have a goal.  Claude Giroux scored just one in 39:52 in 5-on-5 ice time against Carlson.  On the other hand, there are players like Andrej Nestratil (two goals in 20 minutes at 5-on-5 against Carlson) and Anders Lee (two goals in 23:04; numbers from http://stats.hockeyanalysis.com).  It seems that one part of Carlson’s game he has not yet been entirely able to shake is being around for a goal that probably should not have been scored.

Game to Remember: March 15th against Boston.  The Capitals went into their game against the Bruins on March 15th trying to nip a slump in the bud.  They had lost three of their last four games, the last of which was a lackluster 4-2 loss to Dallas at home.  The Caps had a healthy lead in the race for a playoff spot, but it shrunk from 11 to six points over the ninth-place team that 1-3-0 skid.  They needed a jolt, and Carlson provided it against the Bruins.  On a Capitals power play early in the context, he started the scoring sequence with a feed to Alex Ovechkin for a one-timer that went off the side of the cage.  The puck was turned aside by goalie Tuukka Rask, but it was tracked down by Troy Brouwer behind the net.  He fed the puck around the wall to Nicklas Backstrom who hit “reset” and fed Carlson.  Instead of sending the puck to Ovechkin again, Carlson fired and beat Rask to give the Caps a 1-0 lead in a game they would win, 2-0, to take over the first playoff wild card spot.  It was one of two game-winning goals that Carlson would have against Boston this season.

Game to Forget: October 14th versus San Jose.  You have two assists in a game and still go minus-4?  Well, it happened to John Carlson on this night against the San Jose Sharks.  Before the game was ten minutes old, the Sharks had a 3-0 lead, and Carlson was on the ice for all three goals scored by the visitors.  By the time the game was into the second minute of the third period, Carlson had been on ice for all five goals scored by the Sharks.  Nevertheless, the Capitals came from behind by two goals to tie the game late in the third period but lost in a Gimmick, 6-5.  It would be Carlson’s worst plus-minus game of the season.

One of the hallmarks of the Capitals’ season was the contributions on offense by defensemen.  John Carlson was the biggest part of that.  And when the offense from the blue line dried up, especially in the second round series against the Rangers (no goals and three assists from six defensemen in seven games), the Capitals’ chances to advance were diminished.  And Carlson was a big part of that, too.  He took an o-fer on 22 shots in those seven games against the Rangers and had one goal on 41 shots for the postseason overall.  He was on-ice for 11 of the 28 goals scored against the Caps in the post season, a number that puts him in the top twenty of defensemen in goals scored against/on ice.  While that is not necessarily a rank one would want attached to their name, it is fewer than the goals against scored while on ice for such as P.K. Subban, Duncan Keith, and Ryan Suter.  The Capitals – and Carlson – were very stingy on defense.  The Capitals – and Carlson – found points hard to come by.  It made for a lot of one-goal decisions; too many, as it turned out, for the Caps.

John Carlson has, without much fanfare, become one of the best offensive defensemen in the NHL, which is a nice development, especially with the uncertain return of Mike Green next season.  However, there might be limits to that in its effect on games.  Carlson set a personal best by recording a point in 40 of the Capitals’ 82 games this season.  It eclipsed his 31 games with points set last season.  The Caps were 23-12-5 in games in which he recorded a point, 22-14-6 in games in which he did not.  Look like a significant difference?  It doesn’t to us, either.

Nevertheless, Carlson has become a cornerstone of the Caps’ blue line and the team in general.  His development has been a steady, unbroken arc since he was drafted 27th overall in 2008 by the Capitals.  He is one of an impressive cohort of NHL defensemen in their mid-20s who could dominate the league for years to come.  That arc might have to continue climbing upward for the Caps and Carlson to be successful.  Should Mike Green depart in free agency, he will become the go-to offensive contributor from the blue line, even with Matt Niskanen in the lineup.  And, his use in all situations (he led the team in shorthanded ice time per game, for example) suggests that he will be the unquestioned number one defenseman for the Caps.  The roles expand and become more complex for Carlson, but it is what comes next after a very good season.

Jared Wickerham/Getty Images North America
Posted by The Peerless at 8:00 PM No comments: