To the AHL All-Rookie Team, that is.

The six rookies named to the elite squad are:

Our problem is with the defensemen. Mattias Karlsson and Yannick Weber happen to be the top two scorers among rookie defensemen. However, Karlsson is a -11 on a likely playoff team (Binghamton is fourth in the East Division), and it is a mark that is exceeded by only two other players on the Senators' roster.

As for Weber, he plays for a playoff participant (Hamilton has already clinched a spot), but his +9 is surpassed by eight other players on the roster, including a pair of fellow rookies, and is matched or exceeded by five other defensemen on the roster. One could make a case that these are the two best offensive defensemen in the rookie class.

We can appreciate there being few statistics that shine a bright light on defensemen, and plus-minus is a statistic that can be abused if taken out of context. But there is a rookie defenseman who is currently third in the AHL in that statistic. If you look closely, you would find that his +27 for the season is roughly the same as a number of teammates. On that basis, you might say -- with reason -- that his mark is the product of his surroundings. However, he accomplished his feat in a mere 42 games, not the almost-70 of his teammates and similar AHL leaders. And, he has a mere 10 penalty minutes taken this season, which speaks to his discipline as a player. His 19 points in 42 games apparently was not enough to convince the voters that he was one of the top two defensemen, without respect to adjective, in the league.

The Peerless Prognosticator is ON THE AIR!!! -- Caps vs. Islanders, April 1st

The Caps return to action after a welcome rest since last Friday’s 5-3 win over Tampa Bay. Tonight’s guest – the New York Islanders – pose another of those “will they play down to the level of their opponent” challenges.

Well, as far as playing down to the level of the opponent is concerned, the Islanders occupy quite the low level, as their numbers suggest… 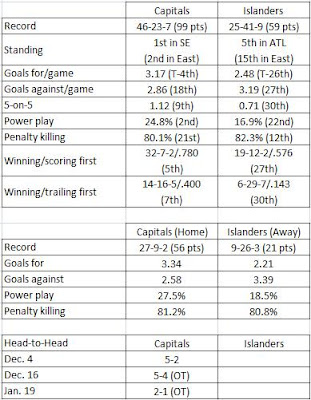 However, the Islanders did manage to put together a 6-5-2 record for March, which would equal that of the Caps. There were some impressive wins along the way, too, as the Islanders knocked off New Jersey, Montreal, and Chicago before shutting out Detroit in their last road game of the month.

"And I was the goaltender in that game!" 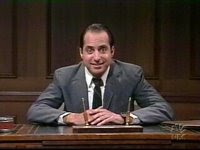 It says in the score sheet that Joey McDonald was the goaltender…you’re lying, aren’t you?

“I didn't always lie. No, when I was a kid, I told the truth. But then one day, I got caught stealing my brother’s hockey sticks…and my mother caught me. I lied. I told her that my coach told me to do it, that he said my brother’s sticks had more goals in them. And he got fired! Yeah, that's what happened!

“After that, lying was easy for me. I lied about my age and joined a Canadian junior team. I was thirteen at the time…no, I was ten! Yeah... I went to Kamloops, and I was injured catching a puck in my teeth. I didn’t miss a shift…and they made me captain! And then I went to Europe, playing for MoDo-dee-oh-doh, or some Swe…uh, Russian team! Yeah… I was scoring a goal every ga…uhhhh, period! In fact, I won the Hartsky Trophy as the most valuable player that year! Yeah, that's the ticket.

“And then I got a call from Wayne Greztk…uh, Scotty Bow…uh, Toe Blake. Yeah, that’s the ticket. And he offered me a five…ten…sixty million dollar contract! But I wanted to play on the team Mike Milbury was coaching. Yeah, right.. And he told me about Pathological Hockey Liars Anonymous.

“Oh, you'd be surprised how many famous hockey people belong. In fact... at one of the meetings I met my wife – Carrie Milbank! Yes, I'm a changed man now, and all because of Pathological Hockey Liars Anonymous. Why, I - I even have my picture on the cover of The Hockey News. Yeah. Every day! Online!! Yeah.. that's the ticket! Yeah, you betcha!”

April Fools Day…it brings ‘em all out, doesn’t it? Getting back to the real game…What New York was able to do in March that could spell some trouble for the Caps is play respectably, if not spectacularly, on special teams. The Islanders coverted 8-of-46 power plays (17.4%) while killing off 48-of-59 shorthanded situations (81.4%). Those numbers actually got better on the road – 20.0 percent on the power play (6-of-30) and 86.2 percent on the penalty kill (25-of-29).

What is perhaps odd in this improvement for the Islanders is that it was accomplished after their second leading scorer – Bill Guerin – was removed from the lineup and subsequently traded to Pittsburgh. What Guerin’s trade created was an opportunity, and Kyle Okposo seems to have taken advantage of it. In 13 games in March, the rookie was 5-8-13, +2, and had two game winners to his credit. The Caps haven’t seen much of him, as Okposo had played in only one of the three games to date played by these clubs. He had a goal in that game, on January 19th.

Meanwhile, Doug Weight is just getting back into the lineup after missing six weeks to a knee injury. He left quite an impression in the Islanders’ last game – a 4-3 shootout loss to Philadelphia. In what was one of those “I went to a fight, and a hockey game broke out” kind of nights, Weight took on Darrell Powe, getting an instigator and a misconduct on top of the five-minute major, then added a roughing minor penalty later on his way to a 19-penalty minute evening – big stuff for a guy who has averaged a little over 40 minutes of PIMs a year over the last seven seasons coming into this one.

Frans Nielsen is another of those guys who might be taking advantage of the departure of Bill Guerin to make an impression. He was 4-6-10, +2, in his last 11 games in March. Nielsen also had two game winners for the month. Nielsen has an assist in three career games against the Caps.

What the Islanders would probably like to get is some more production out of Andy Hilbert. The center is 11-15-26 in 63 games this year, which probably wasn’t what was envisioned when he was brought to Long Island after getting 18 points in 19 games to close the 2005-2006 season in Pittsburgh. He’s been something of an underperformer since (28 points being his high mark in three seasons with the Islanders), and he was 1-3-4, -2, in 13 games in March. He hasn’t had much success against the Caps, either, going 1-1-2, -2 in 12 career games. He has no points in two games against Washington this year.

Joey MacDonald will get the call against the Caps tonight in goal, and he – Not Tommy Flanagan – was the author of the 2-0 shutout of the Red Wings at Joe Louis Arena last week. He did not have a busy March, as he was nursing knee and groin injuries for a large portion of it. However, he was 2-0-1, 2.00, .944, with that one shutout for the month. He’s had his troubles against the Caps, though. In two career appearances – both this year – he is 0-1-1, 4.37, .895.

Let’s face it, the Caps should score on this team. If the Islanders are to have any chance of preventing that, they are going to have to have some guys step up on the blue line in the absence of Andy Sutton and perhaps Freddy Meyer. Streit has been a horse for the blueliners, but a guy like Witt needs to step up. While Witt is dead last in the NHL in plus-minus (-31), he was even for the month of March and contributed a couple of assists. Against his former team, he is 0-1-1, -5 in ten career games and 0-0-0, -5 in three games this year.

Here is an odd piece of information to take with you for this game. In the two games that MacDonald has played in goal for the Islanders, seven different Caps have the nine goals scored against him. And, of those seven, three of them came from very unlikely sources (Boyd Gordon, Donald Brashear, and Milan Jurcina). Three of them came from Alex Ovechkin, who generally has his way with the Islanders, anyway (11 goals in 14 career games). Another of those goals was off the stick of Eric Fehr, who appears to be getting another shot on the top line tonight. That goal against the Islanders in a 5-2 win on December 4th is his only career goal against New York, but he should get ample opportunities to add to that total tonight. His problem hasn’t been getting shots – he had 27 in 13 games in March, while averaging less than 12 minutes a game on the fourth line more often than not – it’s been getting them to go in. He had one goal on those 27 shots in March.

Well, it’s April. And now, while there will be some experimenting (like Fehr on the top line), it’s time to get down to business. The trick for the Caps is to start playing like it’s the playoffs to ensure that they are still playing at the end of the month, not just the beginning.