Theme: “Twice and thrice over, as they say, good is it to repeat and review what is good.”
-- Plato

In the years following Lockout I, Jason Chimera was one of those NHL players who cobbled together a solid, if unspectacular resume, recording seasons in which he would play 15 minutes a night as a forward for the Columbus Blue Jackets, his goal totals settling in the mid-teens.  He was a complementary player to the more talented likes of Rick Nash or Nikolai Zherdev.

In the last week of December 2009, however, he was loosed from the bounds of mediocrity that was the Blue Jackets, and he was traded to the Capitals for Chris Clark and Milan Jurcina.  In one way his performance was unchanged (17 points in 39 games with Columbus, 17 points in 39 games with the Caps), but in another it was the difference between an early summer and a less early summer.  He was minus-7 with Columbus, plus-6 with the Caps.  The difference was that he part of a better supporting cast.

When Chimera slipped a bit the following season – 2010-2011 (10-16-26, minus-10 in 81 games) -- one might have had him penciled in as a third-liner going into the 2011-2012 season.  In fact, that was the role he adopted as the season started, manning the left side on a line with Brooks Laich and Joel Ward, the “Meat and Potatoes” line.  It worked for Chimera in the early going, putting up three goals in the first two games and four in the first five.  But by November 1st it was apparent that this trio was not driving play.

Ward would spend significant minutes on the fourth line; Laich would move around as a product of his versatility and injuries, primarily to Nicklas Backstrom, which left a large hole in the middle.  Meanwhile,
Chimera was quietly putting together a career year.  He got off to a fast start with those four goals in his first five games and 11 in his first 26 games.  A 35-goal pace for a player whose career best to that point was 17 (in 2005-2006) was probably a bit much to hope for.  But while Chimera did slump some at mid-season (he had only five goals in his next 46 games), he closed strong with four goals in his last ten games to finish with a career high of 20 goals, third best on the Caps.  What is more, five of his goals were game-winners, and 12 of them either tied games or gave the Caps a lead.

Take those numbers and couple them to the fact that he was one of only five Capital forwards averaging more than 50 seconds of both power play and penalty killing time a game, and he was a rather important player.  At 5-on-5 he had the third-best Corsi value relative to quality of competition among Caps forwards (numbers from behindthenet.ca).  Taken together, he was no longer just a complementary player, he was an important ingredient to success.

The Big Question… “New Normal” or do I hear a clock striking midnight?

In setting a career high in goals last season Jason Chimera did so without the benefit of shooting efficiency that was far outside his career norm.  Coming into the 2011-2012 season his career shooting percentage was 9.03.  He finished the season at 9.76 percent on 205 shots.  The shot total was also a career high and was more than 50 shots higher than what had been his average per 82 games over his career coming into the season (153).

It is nice that Jason Chimera had a career year.  It is nice that he is the second-leading goal scorer from last season returning to the Capitals (Alexander Semin’s 21 goals having gone to Carolina).  It is not necessarily nice that he be counted on to duplicate either of those outcomes.  It seems unlikely that he will: a) duplicate last season’s 205 shots on goal, or b) match last season’s 9.76 percent shooting percentage (the second would be more likely to happen than the first).

Chimera has established himself as a reliable third-line contributor with something of a flair for the dramatic (he tied for the team-lead in game-winning goals last season, and four of his seven playoff goals are game-winners).  Getting 20 goals again would certainly be a bonus and certainly not unwelcome, but having Jason Chimera finish as the second or third leading goal scorer on this team with that total probably would leave the team realizing less than a hoped for level of success.

Posted by The Peerless at 9:21 PM No comments: 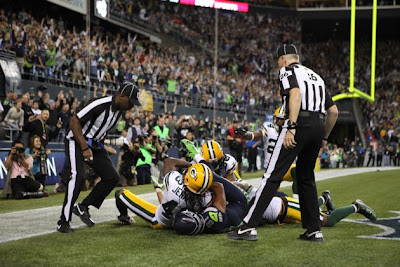 If you can keep your head when all about you
Are losing theirs and blaming it on you,
If you can trust your call when all fans doubt you,
And make no allowance for their doubting too;
If you can go to the video replay and not be tired by waiting for the video replay,
Or being vilified by television announcers, be oblivious to it,
Or being mocked by players, be oblivious to that, too,
And yet don't look too good, nor look good at all, for that matter:

If you can dream of being a regular official while the play is going on - and not make dreams your master;
If you can think of a regular pay check - and not make thoughts your aim;
If you can meet with Blown Calls and Ignorance of the Rules
And treat those trivial things just the same;
If you can bear to hear the call you’ve made
Twisted by knaves to make a trap for fools (or Roger Goodell…same thing),
Or watch the calls you gave your life to, broken,
And stoop and build 'em up with worn-out tools:

If you can make one heap of all your rulings
And risk it on one turn of video replay,
And have them reversed, and start again at the last line of scrimmage
And never breathe a word about your embarrassment,
If you can force your heart and nerve and sinew
To watch the play long after the ball is snapped,
And so hold on when there is nothing in you
Except the Will which says to them: 'Holding…ten yards…still second down!'

If you can walk past angry fans and keep your virtue,
'Or walk with Kings (or team owners…same thing) - nor lose the common touch,
If neither fans nor livid players can hurt you,
If all men count with you, but none too much (well, maybe the home team a little bit more);
If you can fill the unforgiving Sunday afternoon (or Monday night)
With sixty minutes' worth of whistles whistled,
Yours is the Game and everything that's in it,
And - which is more - you'll be a Replacement Referee, my son!

Photo by Otto Greule Jr/Getty Images
Posted by The Peerless at 6:25 AM No comments: