The Peerless Prognosticator is ON THE AIR!!! -- Game 51: Kings at Capitals, February 3rd

The words “desperation” and “February” probably do not go together in a National Hockey League schedule, especially when the team in question has an eight-point lead in the standings over their nearest playoff challenger.

However, the Washington Capitals might feel a hint of desperation as they host the Los Angeles Kings at Verizon Center on Tuesday night.  The Caps go in to this contest having lost six of their last seven games (1-4-2), dropping them to fourth place in the Metropolitan Division and eighth in the Eastern Conference.

If they Caps might have a hint of desperation about them, the Kings might be characterized as bewildered.  Twice a Stanley Cup winner in the past three seasons, the Kings find themselves on the outside looking in at a playoff berth, three points behind the Calgary Flames for the last spot among playoff eligibles with a game in hand on the Flames (going into Monday's games).

The bewilderment over the Kings is their prolonged slide down the standings.  On December 4th, the Kings beat the Arizona Coyotes for their third win in four games. They were 14-7-5, fourth in the Pacific Division and seventh in the Western Conference.  Since then, however, the Kings are 7-9-7 and have slipped to fifth in the division and ninth in the conference.

There are two things that jump out from that record for the Kings.  First, they give up too many goals – 3.09 per game over that 23-game stretch, not counting trick shot tallies.  The second is that they have had either bad luck or bad performances in extra time.  Los Angeles has lost all seven extra time decisions over this 23-game span, three in overtime and four in the freestyle competition.

The too many goals problem might be one of too many shots.  Consider that last season, number one goaltender Jonathan Quick compiled a 2.07 goals against average with just a .915 save percentage.  He was able to do that facing just 24.4 shots per 60 minutes.  This season Quick has a .912 save percentage, but his goals against average is a comparatively hefty 2.47.  He is facing 28.0 shots per 60 minutes.  While the Kings remain a stingy lot in allowing shots on goal (sixth fewest per game in the league), the increase in Quick’s goals against average is almost entirely attributable to that increase in shots allowed.  And, truth be told, Quick has not been the most efficient of goaltenders since he took over the number one duties in the 2008-2009 season.  Only once in seven seasons, including this one, has he had a save percentage over .920, not what one might expect for a goalie whose goals against average over that same span is 2.29.

It is time for others to step up, and this brings us to the curious case of Anze Kopitar.  Long held by the “smart” crowd as one of the top forwards in the game that few pay attention to (and they’re right), there has been a marked slide in Kopitar’s game, at least in a statistic that same smart crowd sneers at.  Consider, when Alex Ovechkin had his minus-35 last year, he suffered a net drop of 37 points from hi previous season (from plus-2 to minus-35).  So far this season Kopitar, who finished last season at plus-34, is at minus-6, a net drop of 40 points.  No one is going to argue that Ovechkin is the defensive player that Kopitar is, but Kopitar is on a pace to score nearly as many points this season (68) as last (70).  However, he is on a pace to be on ice for 18 more goals this year (77) than last (59).  It is an odd development. 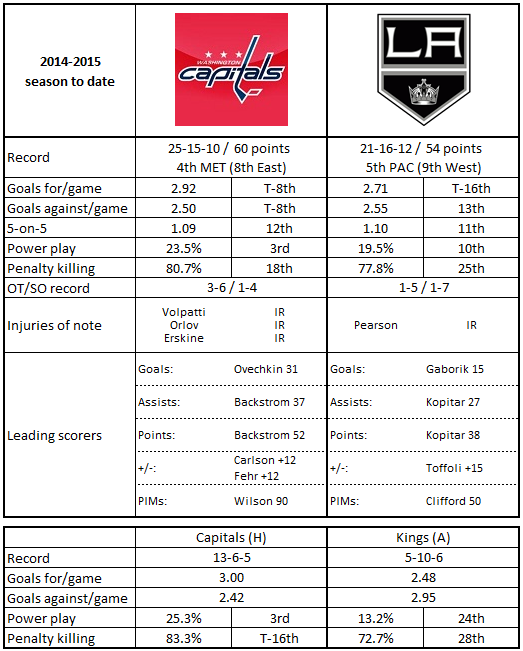 2.  The Kings are the worst team in the league in winning percentage in games decided by one goal.  That’s right…worst.  Nearly half their games have ended in one-goal decisions (24 of 49), and they have won just six times (.250 winning percentage).  They lost six straight such decisions before they beat Chicago, 4-3, last Wednesday.  They have one one-goal victory on the road this season, a 3-2 New Year’s Day win against the Vancouver Canucks (1-4-6).

3.  At a high level, the Kings are a remarkably unremarkable team, a “middle-20” sort of squad…
4.  Where the Kings are extraordinary is in extra time.  They stink.  Their 12 losses in extra time is the most in the league, and no team has fewer wins (2).

5.  They do hit, though.  Los Angeles leads the league in total hits, and it does not appear to be aided by friendly official scoring at home (home: 33.1/game; road: 32.3/game).

1.   The Caps have one of the best power plays in the league (23.5 percent, third overall).  Their penalty killers have been better of late, allowing the Caps to climb to 18th in the league.  So, the special teams goal differential should be tilted in the positive direction, right?  Not as much as you think.  Net power play goals scored (goals scored less shorthanded goals allowed): 34.  Net power play goals against (goals allowed less shorthanded goals scored): 32.

2.  Since the Caps beat Philadelphia in a 1-0 shutout on January 14th, they are allowing 3.14 goals per game.  In two of those games the Caps shut out opponents in regulation time.  In the other five games they allowed four or more goals.

5.  Avert your eyes at this next one… The Caps have lost seven straight games to the Kings (0-5-2), ten of their last 12 contests, and they have a 5-15-2 record, with another three games ending in ties, over their last 25 games against Los Angeles.

Who is Jake Muzzin, you ask?  First, he is a defenseman for the Kings.  Oh sure, folks know Drew Doughty and the frequent mentions of his being among the top defensemen in the game.  Folks might even know Alec Martinez, if only for his Stanley Cup-clinching goal in last spring’s finals.  Caps fans would even remember Jeff Schultz (nine games this season, 0-1-1, plus-1…still a “plus” player).  But Jake Muzzin?  He is something of a specialist.  While he has a team-worst minus-9 among defensemen (the only “minus” player in fact), he leads the Kings’ defensemen in goals (6), power play goals (3), power play points (12), and has the only three game-winning goals from Kings blueliners this season.  Pay attention.  He has two assists in two career appearances against the Caps.

Jack Hillen has had something of an odd season.  First, there have not been the near-season-ending injuries to start his campaign that he suffered the last two years (thank heavens).  More to the point, though, in 25 games he has been on ice for only 11 goals scored by the Caps, despite skating 59 percent of his 5-on-5 minutes with Mike Green, more than any other Capital (Hillen has almost no time on ice on special teams).  Despite the friendly pairing, Hillen averages more minutes per goal on ice scored (28.2) than any other Capital defenseman.  Dmitry Orlov might have filled that role as a third pair defenseman with Green, and Nate Schmidt did before being sent down to Hershey and then sustaining an injured shoulder.  But Hillen is in the role now, and the Caps could use some more production from that position.  In eight career appearances against Los Angeles, Hillen does not have a point.

The Caps had a difficult schedule in December, 12 straight contests against Eastern Conference opponents to close the year.  They did quite well, going 8-1-3 in those games.  They are in the midst of a difficult part of their schedule now, one that has included and will include Pittsburgh (three times), Anaheim (twice), St. Louis, San Jose, Winnipeg, the New York Islanders, and the Kings by the end of February.  So far, the Caps are not having as much success (a win over Pittsburgh, losses to Montreal and St. Louis to start this stretch).

Washington will get a Kings team that is struggling a lot, especially with goaltending, special teams, and close games (not a lot left after that).  You could say that they are ripe for the picking but for the fact that the Caps have had struggles of their own.  It will make for an interesting game, one that both teams really need against what for each is a vulnerable opponent.

Posted by The Peerless at 5:47 PM No comments: