What was it Herbie said? Five regulation losses at home...
...four of them to Western Conference teams.
Guess that means the Caps will win all their home games from here on out.
Posted by The Peerless at 11:39 PM 1 comment: 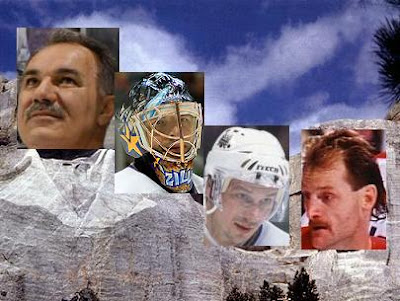 OK, we’re late to this, but that won’t stop us from blathering on about the subject.

John Buccigross over at ESPN did a “Mount Rushmore” thing for all 30 NHL teams. As he put it:

"I thought I would provide a Mt. Rushmore for all 30 NHL teams. This is a players-only NHL Mt. Rushmore. The criteria? A combination of impact, love and production determined by using both sides of the brain, some research and some feel. It's not all about numbers."

Fair enough. But I look at Mt. Rushmore, and I see some care in the Presidents whose images were selected to stand on that mountain. So with that in mind, here is The Peerless’ Mt. Rushmore of Capitals:

Washington is perhaps a great American less for his tenure as President than as a general in the Revolutionary War. This is not to say that he was a bad President, he was not. In fact, his greatest accomplishment as President was serving two terms as the first chief executive in a democratic republic forged out of a revolution. He was the man who was there at the start, who served as the strong figure to earn the fledgling country time to grow and stand on its own.

Labre was the face of the Capitals in those first seasons. The team was abysmal, the sport a curiosity to Washingtonians. But Labre – with his signature moustache (kind of like Washington’s wooden teeth, but…different) – was the personality most associated with that fledgling team.

John Kennedy once remarked at a reception for Nobel Prize winners, that it was the greatest assemblage of talent in the White House since Jefferson dined alone. It was a reference to the scope of Jefferson’s interests, talents, and impacts on his nation.

Olaf Kolzig was not the face of Capitals hockey for a decade merely because he was a talented goaltender. His impact was broader than that. He was active in the Washington community and was a personable, approachable (if sometimes volcanic on the ice) personality who was a credit to the Capitals organization. No other Capital was as identifiable in the late 1990’s and early 2000’s than “Olie the Goalie.”

Roosevelt was a man of incredibly magnetic personality, one of immense talent and energy. His achievements and exploits, even outside of those accomplished as President, reflect a man of action.

Bondra was action, personified. His unmistakable skating style, covering ground with powerful strides, his signature one-time shot from the left point on the power play, his consistency as a goal scorer that allowed him to score 350 goals over a nine year period (one of which was shortened due to labor troubles), and the joy he communicated to the crowd with each and every score made him the most electric of Capitals players in his era.

As any grade school student knows, Lincoln presided over the most important conflict in American history – the Civil War - fought to prevent 11 states from executing their declared intention to secede from the Union. Lincoln was the person most responsible for preserving that Union.

Langway was part of a six-player deal made with Montreal in 1982. He came to a team in trouble. From bad records every year, to small crowds, to a "Save the Caps" campaign, the signs pointed to a franchise that might not last in Washington. Langway assumed the role of captain and imprinted a hardnosed style of hockey on the team that became its personality for the 1980’s. Being a member of playoff teams in each of the 11 seasons during which he was a Capital, the “Secretary of Defense” can be said to have preserved the union of hockey and Washington.

So there it is, your Mt. Capsmore.
Posted by The Peerless at 2:32 PM No comments:

Our esteemed fellow wizard, “Hooks Orpik,” has devised what he calls the “black and blue trophy” for that player which records the most hits plus blocked shots in the season. We think it is a fine idea…good enough to steal in broad daylight, in fact.

In the race for the Capitals’ version of this, which (in the tradition of naming trophies after people) we are tempted to designate the “Bobby Gould Trophy,”* here are the standings: 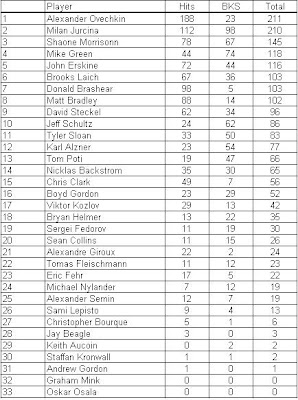 If you're looking for a frame of reference here, the league leader in this painful measure is defenseman Brooks Orpik (Pittsburgh), with 324 combined hits and blocked shots.

* We put Gould's name on it since he was a gritty third liner who could hit, check, defend, score, and make life difficult for Penguins...pretty much all you'd want in a Capital. Although, we're guessing we're going to have to pay royalties to the originator of the concept.