The Peerless Prognosticator is ON THE AIR!!! -- Game 72: Capitals at Lightning, March 16th

When last the Washington Capitals skated on the ice sheet at Amalie Arena in Tampa, they were celebrating a Game 7 win over the Tampa Bay Lightning in the Eastern Conference final that sent the Caps to the second Stanley Cup final appearance in team history.  The win, a 4-0 shutout, completed a comeback from a 3-2 deficit in games, the third straight series in which the Caps found themselves behind in games at some point.  The rest, as they say, is history.  The Caps went on to win their first Stanley Cup, and the Lightning went home to ponder what might have been.

On Saturday night, we will get a glimpse of what might be as the Caps, the hottest team in the league, face off against the Lightning, with by far the league’s best record, in what might be a preview of a repeat of last season’s conference final.  Washington will go into the game with an 8-1-0 record over their last nine games since February 24th, the best record in the league over that span.  On the other side, the Lightning are pursuing a record.  With 54 wins in 71 games, they are on a pace to finish the season with 62 wins, which would tie the 1995-1996 Detroit Red Wings for most in NHL history and make them only the third team in NHL history to finish a regular season with 60 or more wins (the 1976-1977 Montreal Canadiens had 60 wins).

There is nothing the Lightning do poorly.  It starts with having the best scoring offense in the league (3.82 goals per game).  The league had 13 players with 80-plus points through Thursday’s games, and the Lightning had three of them – Nikita Kucherov (115/1st), Brayden Point (86/T-8th) and Steven Stamkos (81/13th).

Kucherov and Stamkos are names well known to hockey fans, Point somewhat less so.  It does not mean that his production should be considered surprising, though.  Now in his third NHL season, the former third-round draft pick (79th overall in 2014), has displayed consistent and significant improvement in production.  He started in impressive fashion, finishing among the top ten in his 2016-2017 rookie class in goals (18/T-9th) and points (40/8th), despite appearing in only 68 games.  He improved on those numbers last season, finishing 32-34-66 while dressing for all 82 games.  His 12 game-winning goals led the league.  This season, he already has set a new career best for goals scored (38), assists (48) and points (86) in 69 games and could become only the fourth player in Lightning history to finish a regular season with at least 100 points (Kucherov has done it twice, including this season, and Vincent Lecavalier and Martin St. Louis each did it once).  He does score points in bunches.  With 11 games this season with three or more points, he trails only Winnipeg’s Mark Schiefele (13) and teammate Kucherov (17).  Point is 3-3-6, minus-3, in six career games against the Capitals.

Victor Hedman is not having quite the season he had last year (17-46-63, plus-32), but he is having a fine season nevertheless (9-36-45, plus-15, in 63 games).  If he records five more points, it will be his third straight season with 50-plus points, a club that has a single member among defensemen at the moment, San Jose’s Brent Burns.  Although he turned just 28 years old in December, Hedman is already arguably the best defenseman in Lightning history.  He has 25 more goals (91) than any defenseman in franchise history (Dan Boyle: 66), is more than 100 assists clear (318) of the second place blueliner (Boyle: 187), and has more than 150 points more (409) than the runner up in team history (Boyle: 253). The odd part of Hedman’s numbers this season is that the Lightning are an unremarkable team when he scores goals (5-4-0), but much better when he is setting up others (24-1-1 in the 26 games in which his points came only on assists).  Hedman went through a season-long six game streak without a point from February 12th through February 25th, but since then he has points in six of eight games and is 2-6-8 over that stretch.  In 33 career games against the Caps, Hedman is 2-11-13, minus-6.

In his first 56 appearances last season, goaltender Andrei Vasilevskiy went 40-12-3, 2.45, .925, with seven shutouts.  His path seemed clear toward backstopping the Lightning to a championship, but the tunnel was one of those wall paintings of a tunnel that Wile E. Coyote would run into in Road Runner cartoons.  He finished the regular season with a record of 4-5-0, 3.74, .884, and one shutout in his last nine appearances.  His postseason was similar, if not quite as severe, going 8-2, 2.20, .927 over the first two rounds, but then going 3-4, 3.16, .906 in the conference final against the Caps.  This season, Vasilevskiy has been brilliant once more as the regular season rolls toward its finish.  Of 38 goalies with at least 1,750 minutes played, he ranks fourth in goals against average (2.27), second in save percentage (.929), and is tied for second in shutouts (six, with Ben Bishop).

The difference so far this season is his getting a lighter workload.  Through March 14th last season, Vasilevskiy had appeared in 57 games and logged 3,352 minutes, both among the top five goalies in the league at the time.  This season, he has appeared in 45 games and logged 2,724 minutes.  The reason for the lower games and minutes played is a 14-game absence for a fractured foot in November/December, but it might prove to be a blessing in disguise if he is fresher for the postseason than he was last year.  He is 13-1-2, 1.77, .943, with three shutouts in his last 16 appearances.  Vasilevskiy is 3-4-2, 2.46, .920, with one shutout in nine career appearances against the Caps. 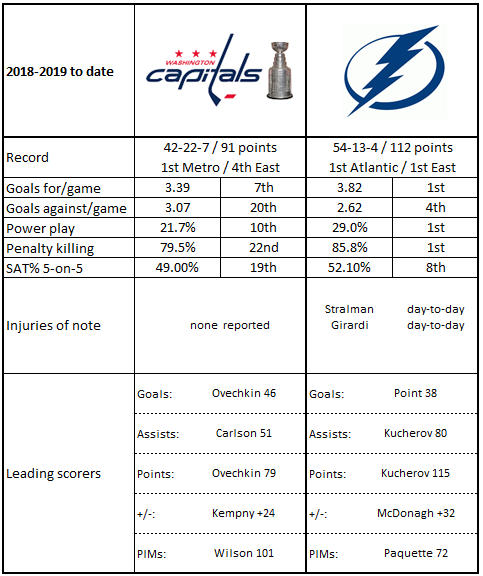 1.  Tampa Bay has not lost consecutive games in regulation since early November.  Since then, they are 41-8-3.

3.  Tampa Bay is the only team in the league in the top-five on both sides of special teams.  Their 29.0 percent power play and 85.8 percent penalty kill are tops in both categories.

1.  Over their 8-1-0 run, the Caps have outscored opponents, 37-21, tying them with Pittsburgh for the best goal differential over that period (plus-16).

2.  In that nine-game run, no team has more even strength goals than the Caps (30), and they also rank tied for fifth in power play goals scored (six).

After seven-plus seasons as a New York Ranger in which he was a largely dependable defenseman who drew the tougher matchups in the defensive end and contributed in the offensive end (averaging 8-30-38 per 82 games as a Ranger), he was shipped to the Tampa Bay Lightning at the 2018 trading deadline with J.T. Miller for Vladislav Namestnikov, Brett Howden, Libor Hajek, a 2018 first round draft pick, and a conditional 2019 second round draft pick.  His first experience with the Lightning did not go especially well.  McDonagh was 2-1-3, plus-1, in 14 games to close the regular season, and then he went 0-5-5, plus-2, in 17 postseason games.

This season, he has returned to something resembling his profile with the Rangers – 8-28-36, plus-32 (second among all skaters), in 71 games.  That plus-minus number is interesting.  McDonagh was a minus-4 in a 6-5 win at home over Philadelphia back on December 27th.  Since then, he has had only two “minus” games in 17 home contests (both a minus-1).  However, in those 17 home games he has only two goals and two assists.  One cannot say his offensive production has been missed, given that Tampa Bay is 13-2-2 in those contests.  McDonagh is 2-17-19, plus-13, in 27 career games against the Caps.

The Capitals have had a lot of success recently, but it seems to have passed Dmitry Orlov by.  When last season ended, Orlov seemed on the brink of becoming a solid two-way defender for the Caps for years to come.  This year, while his assist total has remained solid, his goal scoring from the blue line has dried up.  The three goals he has this season in 71 games ties his lowest total for any of his six full seasons in the NHL, and he has not finished a season with fewer than six goals since he posted three in 54 games in the 2013-2014 season.

Orlov went 16 games without a goal to start the season before recording a pair in a 5-2 win in Minnesota against the Wild on November 13th.  He then went another 30 games without a goal before potting one in an 8-5 loss in Chicago to the Blackhawks on January 20th.  He is now on a 23-game streak without a goal overall, and he has gone 46 straight games at home without a goal dating back to last season.  And, his ice time has been an indicator of success, or lack of it.  In the 26 games in which Orlov skated at least 22:20 this season, the Caps are 13-8-5, but in the 12 games in which he skated under 20 minutes, Washington is 9-3-0.  Orlov is 0-5-5, plus-1, in 17 career games against Tampa Bay.

This is the first meeting of the clubs this season, but it will be the first of three meetings in the space of two weeks.  It almost has that playoff feel about it.  The Caps have had more than their share of success in Tampa, though.  They go into this game 5-1-2 in their last eight games there, outscoring the Lightning by a 27-22 margin.  And does not include the three wins in four games in Tampa during the postseason over which they outscored the Lightning, 16-7, capping it off with the 4-0 shutout that sent the Caps to the Stanley Cup finals.  Memories are long in hockey, especially when one comes out on the losing side of the ledger in high-stakes games.  As if Tampa was not simply good enough to make the Caps’ evening difficult on Saturday night, there might be some message sending they would like to provide to the visitors.  We think the Caps will mark it “return to sender.”