What do we make of The Curious Case of the Neglected Nylander?

Here is a player who coming into this season built a solid career for himself. Over 15 seasons he had a per-82 game line of 19-43-62, +7. He'd actually done better in each of his two seasons with the New York Rangers, eclisping all of these averages, before signing with Washington in the summer of 2007. He had the kind of numbers you'd like in a scoring line center. He was injured for most of last year, but you'd have thought his return would be a big plus.

Then the curtain rose on this season. So far, Nylander is 3-15-18, +3, in 39 games, but his recent performance is somewhat alarming for its utter lack of presence. Since Thanksgiving (18 games), he is 1-4-5, +4. His single goal was a game winner -- a fine effort, scoring while almost flat on his back against Montreal. However, outside of that his performance has blended so far into the background as to be almost invisible. He has four multi-point games this year, none since November 19th (he had 20 multi-point games in his final year in New York).

He's averaged 14:49 in ice time, which is good for only 19th on the team. There are five call-ups from Hershey (albeit all of them defensemen) who have higher averages. In four of the last five games, his ice time was lower than his season average.

We don't think Nylander has forgotten how to play hockey and play it at a high level. We don't know if there are any lingering effects from the injuries he suffered from last year. It might just be a case of being something less than the best fit for this team and the way it goes about playing the game these days.

With Sergei Fedorov coming back soon, the Capitals are going to be facing some interesting and perhaps difficult personnel decisions. We can't help but wonder if, despite still having the talent to contribute and there being risks that might ensue for the Caps (Fedorov's health foremost), such decisions won't finally -- as rumors have had it for most of the season -- involve Nylander.
Posted by The Peerless at 12:58 PM 6 comments:

Email ThisBlogThis!Share to TwitterShare to FacebookShare to Pinterest
Labels: Nylander 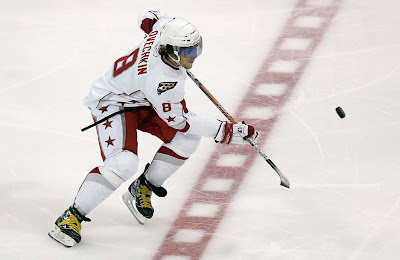 When the Prince of Wales and Campbell...oops, Eastern and Western Conferences take the ice at Bell Centre for the All Star Game on January 25th, the best player on the planet will be sitting on the bench when the puck drops.
Alex Ovechkin finished out of the money among the forwards in the Wale- oops, Eastern Conference voting. That's as much as we'll add to the chorus of "Ovie should start" sentiments.
The shame in all of this is the fabricated enthusiasm for the event perpetrated by the NHL. Their web site proudly proclaims that "Fans Have Spoken: Record Voting Numbers for Crosby, Malkin, Four Canadiens."
Record voting numbers? Well, OK...if you're standard for voting integrity is a Chicago alderman election. And in fact, maybe that is the standard for the league, which announced on that same web site that "Fans vote early AND often (emphasis theirs)."
Let's be plain about this. While the NHL states for the record that 34.7 million votes were cast for the All Star Game, the number of "fans" voting was far less. The outcome was more the triumph of technology, of automated voting programs that digitally stuffed ballot boxes, than of reawakened popularity in the event.
To be honest, we like the idea of fan voting for all-stars. Fans pay the freight in this league, and they were horribly abused in the lockout. This is their opportunity to see the players they want to see on a big stage. But if the voting lacks honesty, of what value is the event it begets? It starts to look more and more like the NFL Pro Bowl, itself a joke of a contest.
But to have the league bray about setting overall voting records or Sidney Crosby "obliterating" the top vote-getting record of Jaromir Jagr is just so much transparent nonsense. It isn't even a good "popularity" contest of the sort that has become the NFL version of the all-star event. It's numbers with no meaning. Making voting an online process is, we suppose, an effort to appeal to the tech-savvy younger fan. Fine, but then don't tap dance with a turn of phrase to suggest without saying plainly that there were 34.7 million "fans" doing the voting. Voting should be an effort, not a click (or a program). If a fan wants his or her favorite to step onto the ice as a starter, then have the fan make the effort to make that preference known. Make it mean something, even if you're going to allow fans to cast multiple ballots. We'd sooner see the league go back to punch or fill-in cards as repeat this travesty.
Ovechkin will play in the event. Someone will represent the Sharks -- perhaps a Joe Thornton or a Devin Setoguchi -- the best team so far in the West. And the Bruins will be represented, too -- maybe a Phil Kessel or a Tim Thomas -- as befits the best team in the East in the first half of the year. It doesn't do much, though, to suggest that the event has any integrity.
Shame on you, NHL.
Posted by The Peerless at 7:14 AM 6 comments: