And now, we move to the wingers, leading off with…

Theme: “I am constant as the northern star…


…Of whose true-fix'd and resting quality
There is no fellow in the firmament."

In its original context, the quote from Shakespeare’s Julius Caesar is meant to convey the hubris of Caesar. Here, it is merely acknowledgment of the fact that Alex Ovechkin is not only arguably the best player in the hockey firmament, but its most consistently elite player.

We’ve made a point of noting his remarkable consistency, and this year was certainly in that mold…

There is more to it than these ten-game splits…only twice did he go more than one game without a point, only once with a three-game pointless streak. In only one ten-game split this season did he go as many as five games without a point (January 29 – February 16, during which he was otherwise 9-4-13, including a five-point game against Montreal). His lowest goal-scoring total in any ten-game split this year was six, in the first ten-game stretch of the year (during which the Caps as a team, scored only 24 goals).

There is a certain superficial aspect to focusing only on Ovechkin’s scoring. Ovechkin was a 96-point player last year and was -19. This year, Ovechkin had 112 points and was +28. The 16-point increase in scoring doesn't explain the 47-point plus-minus turnaround. More to the point, he was a “minus” player in 37 games last year, a “plus” player for only 27 games. This year, he was on the “plus” side of the ledger for 34 games, a minus player for only 19 games. Last year, the longest streak Ovechkin had as an even-or-better player was five games (three times). This year, he had a 15-game streak (December 22 – January 24) and closed the regular season with 11 of 12 games at even or better. Perhaps not coincidentally, that coincided with the Caps’ 11-1-0 finish to reach the playoffs.

And Ovechkin is hardly a scorer of the effete species. Ovechkin ranked sixth among forwards this year in total hits (220). However there are two things to note about Ovechkin compared to the five players ahead of him. First, can hitters score? Looking at the top-ten players in hits, here is how they rank in terms of a ratio of points-to-hits:

Second, can hitters play within the rules in plying their craft? Here is how the top ten players in hits rank in a ratio of hits to penalty minutes (minutes for fighting majors deleted from the PIM totals):

Ovechkin is a scorer who plays a physical game within the rules. The critical reader might ask whether Ovechkin gets a star player’s break on penalties, which would influence the hits-to-penalty minutes results. He might, but even if one makes allowances for star treatment – if you doubled his PIMs, for example -- he still would rank in the top ten in this measure.

There are subtle measures of Ovechkin’s effectiveness this year. Let’s look at the top ten scorers this year and the most basis statistic there is…goals for versus goals against. Here is how they rank in terms of ratio of total goals scored to total goals allowed when they were on the ice:

Even if you take away special teams goals (power play goals for and against when they were on the ice), Ovechkin is a top-five player by this measure and virtually indistinguishable from the three players ahead of him:

One could make the argument that this reflects better players around Ovechkin this year, and this would be true. But if you’re going to make that argument, then do you discount Datsyuk, who plays for a loaded lineup? Please note, you fans of Evgeni Malkin as a Hart Trophy candidate, Ovechkin’s marks – in total and at even-strength – are superior to those of Malkin by rather significant margins.

The answer to the central question surrounding Ovechkin as the season was winding down addressed a wider set of issues surrounding the player. The question was, “is a player on club failing to reach the playoffs worthy of selection as a Hart Trophy (most valuable player) winner?”

Well, Ovechkin – in the last 12 games of the year – was 11-6-17, +13, with four power play goals, two game winners, three game-tying goals (in Capitals wins), two game-winning assists, and a game-tying assist (in a Capitals win). In the 11-1 stretch to end the year, Ovechkin had a hand in four game-winning goals and in four game-tying goals. Even accounting for overlap – having a hand in the game-tying and game winning goals in the same game (accomplished three times in those 12 games) – Ovechkin was in the mix in five of the 11 wins. But the stunning number isn’t on the offensive side of the ledger. Of the 22 goals allowed by the Caps in the last 12 games, Ovechkin was on the ice for four of them, and never more than one in any single game. True, Ovechkin is not often matched against an opponent’s top offensive players, but this is a player thought until this year to be a defensive liability (there is that -19 of last year to remember).

As consistent as Ovechkin has been in his young career, he elevated his game when it mattered, when the Caps were facing what amounted to a single elimination tournament in the last two weeks of the season.

Ovechkin already has the Ross (top scorer) and Richard (to goal scorer) trophies for his mantel. He should win the Hart (league MVP) and Pearson (outstanding player) trophies to complete the set for the 2007-2008 season. One cannot help but give him the highest grade for this season:

As reported in Capital Spirit, there are rumors that feelers have been put out concerning the Caps hosting an outdoor game at FedEx Field. January in Washington can have somewhat unpredictable weather, but we have it on good authority that Reebok is already in the testing phase for their new "Outdoor Performance System" to cope with conditions not usually conducive to pond hockey... 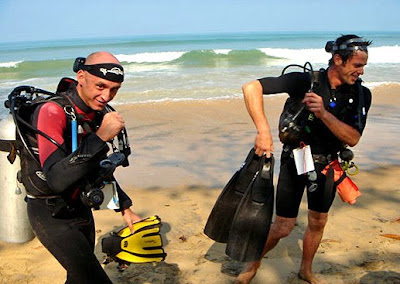 Posted by The Peerless at 8:48 AM No comments: