The Caps try to right the ship tonight as they visit the Carolina Hurricanes in the latest in the storied rivalry between these hotbeds of hockey. It is the last contest before Thanksgiving here in the States, as families gather around the table to wolf down turkey and stuffing before the football games start. Our family is no different. In fact, the cousins are already busy cooking up a storm – a “Hurricane” in fact. Every family has its specialties at this time of year, and we’re no different, are we cousins?


“You betcha.”
“Been watching that new show about Alaska on The Learning Channel, Cheerless?”
“Heck yeah…my mouth was just waterin’ looking at all them critters.”
Tell us, Cheerless, what are you horking… uh, cooking up for us this year?


“Well, we’re gonna start with hambrosia.”
“Don’t you mean ‘ambrosia?’”
“Nope… we improved on it.”
Oh, this oughtta be good.


“You bet… with ambrosia you get whipped cream and all that fruit..yuck! We’ve got ham and bacon and ham and gizzards and ham and chicken livers and ham in whipped cream. Now that’s good eatin’ right there.”
Uh-huh… what else?


“We mix cranberries with pickle relish, but we add our own special touch to make it ‘Cheerless.’”
And that is…


“Beer, to give it that sparkle.”
And your main course?

“Well, we were thinking about a Cajun theme and one of those turducken things. But with all the bounty of the forest right here, we thought we’d do something different.”
I don’t want to know…


“Turcoonirrel.”
This isn’t going to end well, is it?

“Probably not…”
“It’s a squirrel inside a raccoon inside a wild turkey, with deer meat and saltine stuffin’”
The sort of meal from which diets are born.

Tonight’s opponent has perhaps the strangest record in all of the NHL. The Carolina Hurricanes come into the contest with a 9-9-2 record, but how they got there is evidence that they should be signed en masses to next season’s Dancing With The Stars for their ability in the two-game two-step.  Their dance routine has been as follows...

That is how they arrived at a 9-9-2 record, earned largely by alternating wins and losses and avoiding streaks of any kind. Having lost their last two games via the Gimmick, that does not bode well for the Caps. But there is more. Not only are the Hurricanes alternating their wins and losses with uncommon frequency, but they are all over the place in terms of scoring goals and allowing them. This month alone they have scored seven goals in a game three times. And three times they have allowed at least seven goals in a game.  Here is the overall numbers picture... 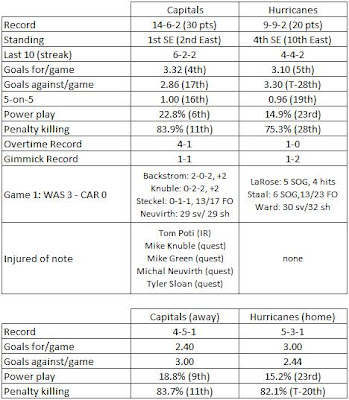 The scoring part for this month has been supplied in large part by Eric Staal. After a slow October (3-4-7, minus-3) Staal has come on in November, posting five multi-point games in going 6-10-16, plus-1 in ten games. If there has been a crack in his game this month it is at even strength. Here is a hint – in the four games this month in which he has not registered a point he is minus-5. In fact, in the ten games this season in which Staal has not registered a point he has been a minus player in seven of them, a plus player in none of them, and a minus-10 overall. Something else to note; among eligible players Staal ranks 85th of 93 players on faceoffs.

Jussi Jokinen had a three-game multi-point streak (2-6-8) snapped on Saturday in a 2-1 shootout loss to Nashville. He has had four multi-point games this month and is 2-9-11, plus-2 for the month. Speaking of shootout, this season has been something of a dry spell for the Gimmick specialist. Coming into the season he compiled a career record of 26 goals in 50 attempts in the skills competition. So far this season he is 0-for-3.

Ian White will make his debut against the Caps in a Carolina uniform. A week ago he was traded from Calgary to the Hurricanes with Brett Sutter for forward Tom Kostopoulos and defensemen Anton Babchuk. It was the second time in 2010 that White was traded. On January 10th he was part of a seven-player deal between the Toronto Maple Leafs and the Calgary Flames. White, along with Jamal Mayers, Niklas Hagman, and Matt Stajan, were traded by Toronto to Calgary for Dion Phaneuf, Fredrik Sjostrom, and Keith Aulie. White dragged his team-worst minus-10 out of Calgary to Carolina. It’s only two games into his stay in Carolina, but he is even so far. White is described as a “skilled puck-moving defenseman.” Of course…how else would you describe a 5’10”, 191 pound defenseman? He might not have been the centerpiece of the deal with Calgary, but he did record 38 points with Toronto and Calgary last season in his second full year in the league. Attention should be paid.

Cam Ward is among the top ten in the league in wins (nine) among goaltenders. That should not be confused with having an especially good season. His goals against average (2.84) ranks in a tie for 26th in the league, and his save percentage (.914) is tied for 15th. Part of the problem is his having faced 33.1 shots per 60 minutes, but he also has been inconsistent. Ward allowed either one or four goals – no other result – over his last five games (one three times, four twice) and has allowed at least four in three of his last seven games. He brings a 13-6-3, 2.60 career record against the Caps into this game.

The Capitals were treated to the full Corvo in the first meeting of these teams – seven shot attempts, two hits, a giveaway, a takeaway, three blocked shots… and a minus-2. He was not nimble enough to slow the momentum of Mike Knuble skating down the right wing as Knuble wristed the puck to the net, creating a rebound that Nicklas Backstrom converted. He also lost a battle with Knuble along the right wing boards trying to keep the puck in the offensive zone late in the game. Backstrom was again the beneficiary, collecting the puck and sending it off and into the empty Carolina net for the final 3-0 margin. He is 3-5-8 in 22 career games against Washington.

The rookie goaltender returns to the scene of his first NHL shutout, earned in that 3-0 game earlier this season. Since then, Neuvirth is 6-1-1, but his GAA is 2.96, and his save percentage is .898. The elevated GAA is a matter of concern because of the consistency embedded in it. He has not had the occurrence of allowing five or more goals in any game in the ten appearances since his shutout. Rather, he has allowed three or four in six of his last eight appearances. Fortunately, the Caps have had a bountiful harvest of goals in November (39 in 11 games), but at some point the goaltender is going to have to be the one to steal games here and there, and Neuvirth hasn’t been that goaltender since the first Carolina game.

Note: Neuvirth was injured on the morning of the last game, and if he cannot go, then it could be Braden Holtby returning to the nets. He could use a confidence-builder, having gone 0-2-1, 4.98, .800 in his last three games.

1. Quiet, please. Carolina can be a loud place to play (RBC Arena was where a record for crowd noise was set at a professional sports event – 138 decibels in a Stanley Cup Finals game in 2006). It can be especially loud when the home team gets out of the blocks fast. And Carolina ranks fourth in goals scored in the first period. If the net behind the Caps’ goalie is quiet, so too will the crowd be, and that source of inspiration could be denied the Hurricanes.

2. Make sure the blowout preventer works. We’re not talking offshore oil wells here, we’re talking three-goal games. Carolina has been involved in the second highest number of three-or-more goal margins in the league so far and has been involved in the third highest number of three-or-more goal losses. Six of the Hurricane’s nine losses in regulation have come by the three-or-more goal margin. On the other side, four of their nine wins have come by that margin. And in those four wins they scored two, three, four, and four first period goals.

3. Give Neuvy a chance. In his last five appearances Michal Neuvirth faced an average of 34 shots per 60 minutes played. That is too much rubber to face. Carolina is ninth in the league in shots on goal per game (32.0). The Caps need to tighten up their defense all around and give their goaltender a chance to give them a lift.

In the end, Carolina always seems to pose a difficult test for the Caps. Since the lockout the Hurricanes are 20-13-4 against Washington. Visiting Carolina in the midst of a slump is a particularly difficult task. But the 5-0 whitewashing at the hands of the New Jersey Devils might have been the slap in the face this team has needed for the past few weeks. Despite winning games, they were giving up goals and looking a little too much like the Gashouse Gang sort of team that ran up and down the ice last season. Then there was the post-game hijinks involving two Caps players and a Devil, yukking it up just yards from the post-game press conference with coach Bruce Boudreau. That might not have merited attention but for the fact that it: a) involved the captain, and b) took place after getting torched on the ice.

That post game incident might be characterized as a “non-story,” the sort of thing that goes on after games in every NHL rink. Maybe, but if the Caps lay an egg on the ice in Carolina tonight, then next news cycle – coming as it will with only one game played in the NHL tomorrow – could make for quite a bit of discussion about the Caps’ – and The Captain’s – woes that will make it a “Black Friday” indeed when the Caps return home.

Of course, that ain’t gonna happen… 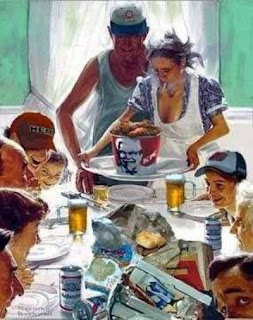 Posted by The Peerless at 6:09 AM No comments: