The Peerless Prognosticator is ON THE AIR!!! -- Game 17: Capitals at Coyotes, November 9th

It might seem as if the Caps just got back into town after a western swing, but less than two weeks after they wrapped up a trip through western Canada, they are off to the scenic southwest to meet the Phoenix Coyotes.

The Coyotes (“Canis latrans,” for those of you scoring at home) is a relative of the domestic dog but this franchise seems to have the nine lives of a cat.  It seems almost as though since moving from Winnipeg in 2006-2007 it has been one issue after another conspiring to doom the existence of hockey in the Arizona desert.

First it was the arena in which they played.  Fine for the Phoenix Suns of the NBA, America West Arena was not large enough to accommodate the larger dimensions of a hockey rink comfortably.  It was reengineered to fit the playing surface, but the fixes meant that as much as a third of the ice surface was obscured in some sections by a balcony that hung over that same playing surface.  The Coyotes were left with the second smallest rink in the league.

Then there were the changes in ownership.  The original ownership group – Jerry Colangelo, Steven Gluckenstern, and Richard Burke – brought the club to Phoenix in 1995 to start play in the 1996-1997 season, but Gluckenstern was bought out by Burke in 1998.  Then, the Coyotes found it difficult bringing in additional investors.  After three years of frustration, Burke sold the club to a pair of new owners in 2001.  Steve Ellman, a Phoenix-area developer, is not a name that would resonate in the hockey community.  The other one would – Wayne Gretzky, who also assumed the responsibilities of director of hockey operations.

It sounded good.  Hockey legend takes the reins and leads the Coyotes to the promised land.  It sounded better still when the Coyotes moved to Glendale Arena in 2003.  The move was followed by a makeover in the wardrobe, discarding the Native American rendering of the coyote logo on a green background in favor of the howling coyote on a Sedona red background.  It sounded – and looked – good, but it did not work out that way.  There was the little matter of actually being able to win hockey games.  They didn’t.

Over the 2002-2003 and 2003-2004 seasons, the Coyotes won only 53 of 164 games and failed to make the playoffs in both years.  At that point, Ellman got out, selling his interest in the club, plus that in the local lacrosse franchise, and the lease to what was now the renamed Jobing.com Arena to Jerry Moyes, owner of a trucking firm and part owner of the Arizona Diamondbacks in Major League Baseball.

What happened next?  The owner went behind the bench.  No, not Moyes… Gretzky.  The greatest player in the history of the game leading players on the ice?  What could go wrong?  Well, there was the little matter of Gretzky never having coached at any level of hockey.

The Coyotes won only 69 of 164 games the next two years.  The solution?  Clean house.  The general manager and senior executive vice president were fired.  And, for good measure, they pink-slipped the general manager of the San Antonio farm club, who also happened to be the assistant GM for the big club.

In 2007-2008 the Coyotes actually finished over .500, the first time since the 2001-2002 season they did so, albeit by one point (83 points on a 38-37-7 record).  It was not nearly enough to stem the tide of financial problems that were about to overwhelm the team.  The NHL was paying the team’s bills, and in 2009 the club declared bankruptcy.  Even that ended up tangled in events.  The league was angling to have the club bought by Chicago Bulls and White Sox owner Jerry Reinsdorf, but Moyes was pursuing a deal with Research in Motion founder Jim Balsillie.

The solution?  It was the NHL versus an owner (how novel).  Who do you think won?  Moyes was stripped of his ownership authority.  There were indications two ownership groups would emerge to bid for the club, Reinsdorf being one of them, but neither pulled the trigger.  That left Balsillie, who already attempted to buy two other teams – the Pittsburgh Penguins and the Nashville Predators – but was unsuccessful.  That was an unpalatable option for the league, so it put in a rival bid and moved to nullify a Moyes-Balsillie deal.  That deal would be voided by a bankruptcy court, but the league didn’t win, either, its bid for the club deemed insufficient.

Now what?  Well, there are a lot of parties still around – the NHL and the two prospective bidders that followed Moyes’ departure, Jerry Reinsdorf and a group called Ice Edge Holdings.  Three parties, one of which was nominal owner but wanted out (the NHL), two investors (Reinsdorf and Ice Edge), and one asset (the Coyotes).  What could go wrong?

The NHL had a deal with Ice Edge, but Reinsdorf had approval for a deal with the city of Glendale.  What a mess.  And it got messier (as opposed to “Messier”…maybe he could buy the team) when Reinsdorf’s bid collapsed.  Now it was a matter of whether the team would even stay in Arizona.  That’s where things got desperate.  And when things get desperate, who do you turn to?  John Q. Public.

The bids were conditional on municipal taxpayers covering operating losses.  If the club turns a profit, the owners win.  If it doesn’t, taxpayers lose.  Hey, it’s America.  Then the Ice Edge bid fell apart on the failure to meet Glendale’s financial conditions.  In 2011 another prospective bidder – a group led by a Chicago investor – came and went, that episode punctuated by threatened lawsuits that crippled the ability to sell bonds to finance payments.  It looked as if there were no options left.  This being America, though, there is always another option…public financing.  The City of Glendale ponied up $25 million (on top of a payment to satisfy a guarantee against the team’s losses the previous season) to keep the club in town for the 2011-2012 season.

Finally, in the summer of 2013, Glendale, owners of Jobing.com Arena, signed a 15-year deal with Renaissance Sports and Entertainment that has the city paying $15 million a year in upkeep for the arena.  That deal was a precondition for RSE completing a deal to assume ownership of the club.

The odd part is that as things got worse on the ownership front, the hockey team actually got better – a 50-win season in 2009-2010, followed by a pair of 40-plus win seasons.  They slipped some last season, failing to make the playoffs, but they come into Saturday’s game against the Caps tied for the third-highest number of standings points in the league. 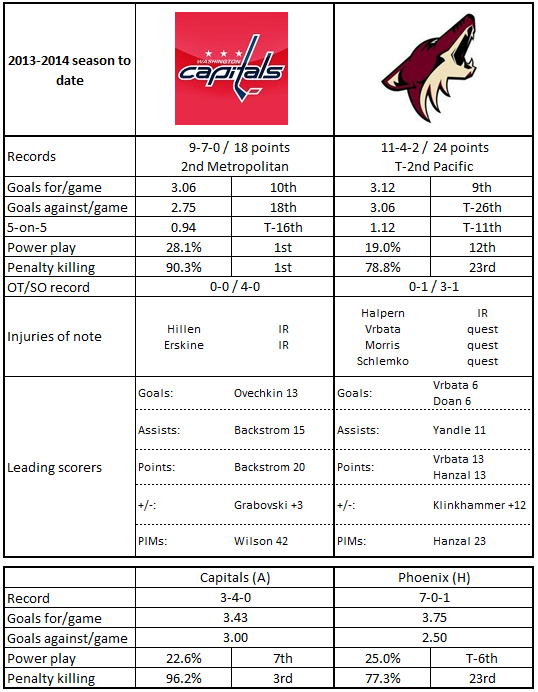 1.  The Coyotes were on a five-game winning streak before the lost at Anaheim, 5-2, on Wednesday night.  Over those six games the Coyotes and their opponents split 36 goals evenly, 18 apiece.

5.  Phoenix has yet to lose a one-goal game in regulation this season (5-0-2).  They have yet to lose a two-goal decision (4-0).  When they lose, they make a stink about it.  They are 2-4 in games decided by three or more goals.  Two of those losses came to the Los Angeles Kings, and only one came to an Eastern Conference team, a 6-1 loss to the New York Islanders on October 8th.

1.  The Capitals have an opportunity in this game to extend an odd streak.  With a win, it will mark the seventh straight year in which the Caps had a winning streak of five games or longer.

2.  The last time the Caps played in the desert, they lost to the Coyotes, 3-2, on Valentines Day, 2011.  If Braden Holtby starts in goal, there will be only seven players from that game who will dress for the Caps: Alex Ovechkin, Nicklas Backstrom, Brooks Laich, Jason Chimera, Karl Alzner, John Carlson, and Marcus Johansson.

4.  The Caps are tied for the league lead in wins via shootout (four, with Los Angeles) and lead in total goals scored (10, two ahead of Phoenix).

5.  Washington is one of two teams in the league with two players in the top ten in points.  The Caps’ Nicklas Backstrom (20/5th place) and Alex Ovechkin (19/tied for 7th) join Anaheim’s Ryan Getzlaf (22/tied for 2nd) and Corey Perry (19/tied for 7th).

The former Capital, one season removed, had a pretty good start with his new club, going 5-4-9, plus-2, in his first ten games.  However, in his last seven games he is 0-2-2, minus-3.  It seems to have affected other parts of his game as well.  For instance, in his first ten games he recorded faceoff winning percentages over 50 percent seven times.In his last seven games he was over 50 percent only once.

Ribeiro has not had extraordinary success against the Caps in his career.  He is 1-8-9, plus-2, in 18 career games against Washington.  The last time he skated against the Caps was November 11, 2011, when he skated for the Dallas Stars. He was held without a point and won only five of 17 faceoffs in a 5-2 Stars win that gave the Caps their first home loss of the 2011-2012 season.

All of a sudden, you can’t stop Tom Wilson, you can only hope to contain him.  With the primary assist on Marcus Johansson’s game-tying goal in the Caps’ 3-2 trick shot win over Minnesota on Thursday, Wilson now has points in consecutive games for the first time in his young career.  It is not uncommon for the Caps.  In four of the last five seasons – including this one – a Capital first-year player put together a three-game points streak.  It was John Carlson in 2010, Marcus Johansson in 2011, Dmitry Orlov in 2012, and this year, Nate Schmidt.  The odd part of the streaks is that the first three players all had theirs in March of their first playing seasons.  Schmidt had his over a three-game stretch from October 26 through November 1st.  Despite the slow start – no points in his first 14 games, Wilson is now tied for 33rd in points among 102 rookies having dressed for games this season.

1.  Get out of the gate.  In eight home games this season the Coyotes have been outscored, 6-3, in the first period.  The Caps have not had the best of times holding leads, but better to play from in front than behind.

2.  Shoot smart.  Only three teams have allowed more shots on goal per game than the Coyotes.  It is, as a group, a hideous possession team.  Only seven of 26 skaters have positive 5-on-5 Corsi values, only four of 17 skaters who have played in at least ten games.  This result to date is misaligned with their respective PDO values where larger shares of players have values over 1000.

3.  Today’s Special.  Only three teams have faced more shorthanded situations than the Coyotes.  The Caps have the league’s best power play.  Advantage: Washington.

Phoenix has that fine 11-4-2 record.  But one might wonder, with all the shots Mike Smith has had to face, with the iffy possession numbers, what is going to happen first?  Will the Coyotes’ fundamental issues be laid bare, or will they turn those possession and shot numbers around and keep on going?  The hint is in the losses for this team.  When they lose in regulation, they get pounded.  Teams that can take advantage of a weak penalty kill (23rd) and depending on their goalie so much to turn away high shot volumes, coupled with the fact that this goalie (if he gets the call) has had a hard time with the Caps, it is a formula for a good start to the road trip.

Posted by The Peerless at 8:50 AM No comments: