Crosby and Ovechkin -- United Once More 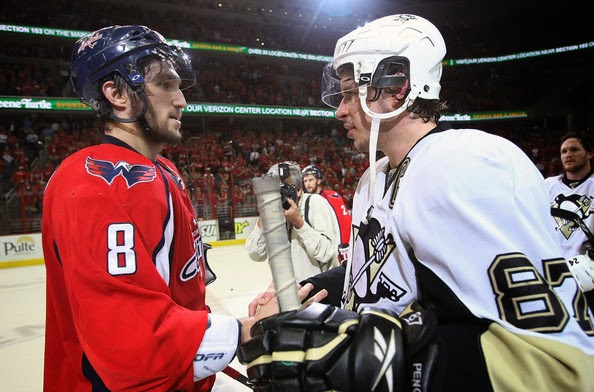 This is a tale of two players, once thought of as the future of the NHL who would lead their respective teams to a decade or more of achievement, usually at the expense of the other.  Their home towns separated by more than 4,000 miles, the cities they call home in the NHL separated by less than 200 miles, they have been almost inseparable in the minds of fans and media since each came into the NHL in 2005.

Almost a decade later, the rivalry between Alex Ovechkin and Sidney Crosby has dimmed.  Between them they have one Stanley Cup, that belonging to Crosby.  They have faced one another only once in the playoffs, that coming in Crosby’s Stanley Cup year in 2009.  Since then, their games and their teams have suffered in the post-season, either from injury, the lack of an adequate supporting cast, coaching turnover, or their own shortcomings.  This morning, one is participating in a world hockey tournament that might seem like an afterthought – the NIT to March Madness – while the other licks his wounds after another lost series to a lower-seeded team.

In a sad way, though, Crosby and Ovechkin are united once more, now by their frustration in the Stanley Cup playoffs.  Since that 2009 triumph for Crosby, both he and Ovechkin have participated in four post-season tournaments.  Crosby missed the 2011 playoffs due to injury, Ovechkin’s team failed to qualify for the 2014 post-season.  For each, those four playoff seasons paint a disturbing picture for players once thought to be the league’s apex mano-a-mano rivalry.

At the highest and most meaningful level, Crosby and Ovechkin simple have not won enough.  In 46 playoff games played since his Pittsburgh Penguins won the Stanley Cup in 2009, Crosby’s teams have a win-loss record of 23-23 in games in which he played, 4-4 in playoff series.  He has been to one conference final.  Meanwhile, in Washington, Ovechkin’s Capitals have a win-loss record of 17-20 over the same span of years, a 2-4 record in series.  The Capitals have not advanced past the second round in any of those seasons.

Even within those respective game and series win-loss records, there is a disappointing record.  In elimination games – those in which their respective teams have to win or go home for the summer – both Crosby’s and Ovechkin’s teams have 2-4 records.  In those six games Ovechkin has a scoring line of 1-2-3, even.  Oddly enough, Crosby is also 1-2-3 in his six elimination games played, but he carries a minus-5 in those games along with that points line.

Then there is the matter of series-clinching games – those for which a win means heading on to the next round.  In those games Crosby’s teams have a 4-6 record over his four playoff seasons with a scoring line of 2-6-8, minus-1.  Embedded in that record is the stain of dropping three straight series-clinching opportunities in one series, the one lost to the New York Rangers last night being the instance on his record.

On the other hand, the record of Ovechkin’s teams is even worse.  The Capitals have had nine opportunities to close out series in Ovechkin’s four playoff appearances over the last five years and posted a 2-7 record in those games.  His scoring line in those contests is 3-2-5, minus-2, but what is odd about his scoring line, given his reputation as a dangerous goal scorer on the power play, is that he has no power play goals.  He, too, has on his record an instance of losing three straight series-clinching games in a single series, that coming in 2010 against the Montreal Canadiens in one of the most shocking first-round upsets in recent playoff memory.

There is also the matter of the ultimate test, a Game 7.  While there is a very small sample of games between them overall, just six in fact, neither seems to have risen to the occasion on that stage.  Crosby has just two appearances in a Game 7 over his four playoff seasons, losing both and failing to register a point in either game.  One came in 2010 in the second round against Montreal, another instance of the Canadiens pulling off a big upset in that year, the other against the Rangers last night.

Ovechkin has made appearing in Game 7’s something of a habit, playing in four Game 7’s over his four playoff seasons.  The Capitals’ record in those four games is 1-3, one of them against Montreal in 2010, two in 2012 against the Boston Bruins and the Rangers, the fourth coming in 2013 against the Rangers again.  Ovechkin and the Capitals are no small part of the reason that Rangers’ goaltender Henrik Lundqvist has built a sturdy resume as a clutch Game 7 goaltender over the past several years.  The Caps and Ovechkin account for two of Lundqvist’s five straight wins in Game 7’s over the last three post-seasons (the Caps also account for Lundqvist’s only career Game 7 loss, that coming in 2009).  Ovechkin’s scoring line in his four Game 7’s is 0-1-1, minus-1.

Here are the respective post-season records of Ovechkin and Crosby, post-2009, summarized: 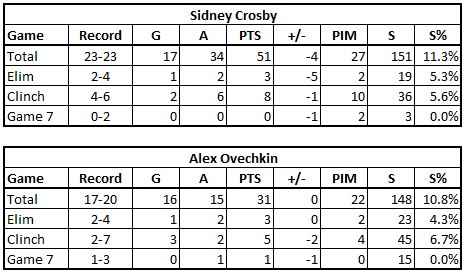 This is not how it was supposed to be.  When Sidney Crosby won his Cup in 2009, one might have thought it was just a matter of time before Alex Ovechkin won his first Cup, especially with the way the Capitals steamrolled through the following regular season.  That was the way it was supposed to be – Pittsburgh and Washington, Crosby and Ovechkin battling in the games that mattered most for the right to carry the Stanley Cup as their respective team’s captains.

Who knew that their 2009 playoff matchup would be their only one as both players now ponder what will be the tenth season in the league for each next season?

Who knew that the conversation surrounding both players would be what qualities they lacked and not what Stanley Cups they won?


Bruce Bennett/Getty Images North America
Posted by The Peerless at 7:41 AM No comments: