Posted by The Peerless at 9:58 AM No comments:

Frankly, we'll stick with this... 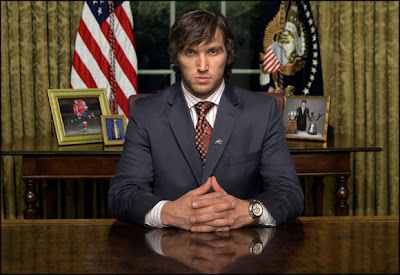 Posted by The Peerless at 9:52 AM No comments: 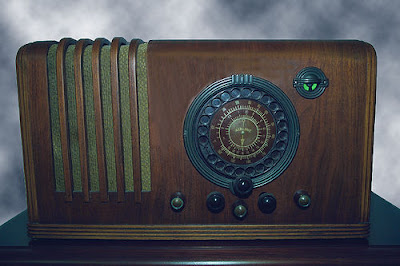 As you know by now, the Caps will not be on the tee-vee when they return home to play the Nashville Predators on Tuesday. Well, kids, for those of you not in actual attendance at the event, this is an opportunity to play Gramma and Granpa and listen to the game on the ol' ray-dee-oh by tuning in to Steve Kolbe’s call on the 3WT network: 1500 AM, 820 AM and 107.7 FM.

Now kids, the verb, to tune involves some hand-ear coordination, if you are getting into the playing Gramma and Granpa thing and listening to it on the old table top console (or even if you're in your car). There are generally two knobs on a radio (what's a "knob," Uncle Peerless?...Gary Bettman, but that's another story) -- one for volume, which is generally on the left, and one on the right.
If you turn the knob on the right to the left, you go "down the dial." That means you go down the numbers that indicate the "frequency" on which the radio station broadcasts. We won't bore you with the technical details of that. If you turn the knob to the right, you go "up the dial." OK, so...oh, we forgot...we assumed you knew how to turn the radio on. That would be by using the knob on the left, which you have to turn to the right to click "on," then turn further to the right to achieve the desired volume.

OK, back to "tuning." You have to turn the knob to the right until the "dial" -- the big circular thing in the face of the radio -- indicates you are at "1500" or "820" (we're leaving the FM number out of this, since Gramma and Granpa didn't listen to that new fangled "FM" in their day).
At this point, you should be hearing the dulcet tones of Steve Kolbe "calling" the game -- that's a radio term for "announcing." And, in order to help you visualize the game Mr. Kolbe is calling, we provide you with these images you may use as mental depictions of what is happening on the ice... 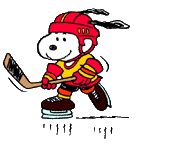 Alex Ovechkin rushing down the left side into the Predator zone...

A faceless Predator (no, really...look for yourself) about to feel the wrath of Matt Bradley 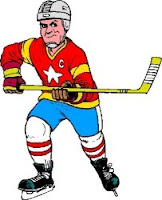 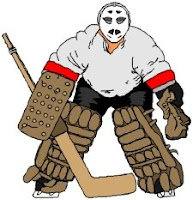 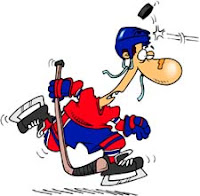 
See? Not having TV won't be so bad. With a radio, a little imagination, and copious amounts of adult beverages (root beer for you folks under 21), you can make this an experience you'll tell your own grandchildren about.
Posted by The Peerless at 8:29 AM No comments: 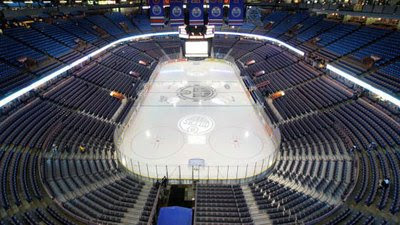 The first time the NHL has been dark for a non-all star break or holiday date since November 21, 2001.
Posted by The Peerless at 2:28 AM 1 comment: