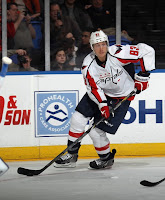 Theme: “There is no job a man can do that is undignified - if he does it well.”
-- Bill Cosby

Jay Beagle travels in rare company.  Only 14 centers in the entire league (of 255 identified at NHL.com) played in at least three-quarters of their team’s games and averaged less than 10 minutes of even-strength time in the 2013 season.  He was one of two in that group (Detroit’s Cory Emmerton was the other) to play in all 48 games.  He was one of only two of that group (Montreal’s Jeff Halpern was the other) to play in three-quarters of his team’s games, average less than ten even strength minutes, yet average more than two minutes of penalty killing time.

What does this tell you?  On the one hand, Beagle is durable.  He seems to have recovered from the concussion he suffered in the 2011-2012 season that cost him more than two months’ worth of games.  On the other, it might speak to the Capitals’ lack of options.  The AHL Hershey Bears was not a team brimming with forwards who could make the jump over Beagle for a spot on the roster.

On the one hand, Beagle did the dirty work that does not often show up in the lede paragraph of game stories.  In addition to those two-plus minutes of penalty-killing ice time, Beagle finished tenth among all qualifying centers in faceoff winning percentage (56.1 percent).  He was charged with only 12 giveaways all season.  Only 24 forwards playing in at least three-quarters of their games (of 296 identified at behindthenet.ca) had lower 5-on-5 offensive zone start numbers than Beagle (40.1 percent).  On the other… well, there is no “on the other” here.  Beagle’ job is doing the dirty, unsung sort of work.

Some players trace a steep development arc from draft pick to contributing NHL player.  Jay Beagle is not one of those players.  The rungs on the bottom of the development ladder were not spaced too far apart for Beagle.  Undrafted, he spent two years with the University of Alaska-Anchorage.  Then, he signed with the Idaho Steelheads in the ECHL.  He was given an invitation to Washington’s development camp in 2007 and played well enough to get a contract with the Hershey Bears (the Caps’ AHL affiliate) in the AHL.

Then he bashed Pittsburgh’s Arron Asham’s fist with his head in Game 3 of the 2011-2012 season and lost almost half the season to a concussion.  Finally, last year, he played in every one of the Caps’ games (in his seventh pro season).  His improvements have been steady, if unremarkable on offense.  His point totals have increased, along with this games played, in each of his five seasons in which he dressed for the Caps – no points in three games in 2008-2009, two points in seven games, three points in 31 games, five points in 41 games, and eight points in 48 games last season.  Small steps, perhaps, but steps forward nevertheless.

If Jay Beagle is not an offensive threat, he has to do other things, even if he is a fourth liner.  In the 2010-2011 and 2011-2012 seasons he averaged about a minute per game killing penalties.  Last season he doubled his time, to 2:07 a game.  Only Brooks Laich averaged more among forwards, but Laich played in only nine games.  The Caps were not an especially efficient penalty killing team, at least during the regular season (27th in the league).  Beagle, on the other hand, was pretty good.

Over at behindthenet.ca, they show 289 forwards who played at 4-on-5 in at some point in least three-quarters of their games.  Beagle ranked 103rd in goal differential between goals scored per 60 minute on ice and goals scored per 60 minutes off ice.  His -2.79 differential was better than than Patrice Bergeron (-1.81), better than Jonathan Toews (-1.52), and better than Pavel Datsyuk (+1.84).*  Those guys were Selke Trophy finalists.  That might mean only that the rest of the Caps’ penalty killers stunk like the dead raccoon under my porch, while Boston, Chicago, and Detroit has better penalty killing balance overall, but still…

The Big Question… Is there another step up the ladder for Jay Beagle?

Over seven seasons, Jay Beagle has gone from the NCAA to the fourth line of an NHL team.  While he did play in all 48 games for the Capitals last season, the nature of the fourth liner in the NHL is that he is a replaceable commodity.  The question this season is, while he represents only a $900,000 cap hit for the Caps this season and next (his cap comparables being Chris Thorburn, Kyle Chipchura, Patrick Dwyer, and Zenon Konopka, among others), can he improve on his performance again, perhaps filling in as a capable third line forward if need be, and thus providing value on that $900,000 cap hit?

On the face of it, the Caps’ fortunes in 2013-2014 are not likely to rest on whether Jay Beagle has a good season.  It is a different thing altogether to say that a timely goal or an inspiring penalty kill from Beagle won’t be the difference in making the playoffs and spending the spring scheduling tee times (if Erik Christensen makes his shootout attempt in the last game of the 2009-2010 regular season, does it alter the timeline that allowed the Flyers to beat Christensen's Rangers for the last playoff spot in the Eastern Conference and go to the Stanley Cup finals?).  You just never know.

It is entirely likely that Beagle will spend the 2013-2014 season toiling in anonymity, asked to do the hard work teams need to have done to be successful… win faceoffs, kill penalties, play defense, give the scorers a breather.  He has become reliable at this work, especially when one realizes that he still has less than two full seasons’ worth of NHL game experience (130 games).  Given his slow but sure development arc, it remains to be seen whether Beagle can introduce modest improvements in his offensive game to give the Caps the hint of another dimension and balance to their attack.

Posted by The Peerless at 9:23 AM No comments:

Countdown to Opening Night by the Elements: Number 29

Copper has been used by humans for at least 10,000 years, one of the oldest uses of metals by humans.  And in all that time it has been a fixture (so to speak) in infrastructure – utensils, wire and cable, piping.  It is uniquely suitable for such uses in that it is an excellent thermal and electrical conductor.  It also has been used in architecture where it can be readily identified in many instances by its green patina, a product of weathering or corrosion.

Practical functions are not the only applications for copper, though.  When copper takes the form of hydrated copper aluminum phosphate, it is prized by many. Folks know it as turquoise.  When alloyed with silver it becomes part of “sterling silver.”  When alloyed with zinc it becomes part of brass.  It is used in wood preservation and in roofing materials to retard the growth of moss.  It is common in jewelry, although it is believed by some that bracelets made of copper also have health benefits.  And, of course, it shows up in coins (the U.S. five-cent “nickel” is mostly copper).

Speaking of health benefits, copper has a diverse and essential role in biological processes.  It presence is necessary for certain essential metabolic functions, is involved in the formation of red blood cells, and is critical for the healthy growth, development, and maintenance of many of the body’s organs, bones and muscle, and connective tissue.  It stimulates the immune response to both fight infections, and to heal and repair injured tissues.  Its ability to neutralize a class of particles called “free radicals (atoms with an unpaired electron in its outer shell)” help prevent cellular damage.  Copper is an important part of “whole body” health.

Here is an element that has fulfilled needs for strong implements, and for conducting heat, water, and electricity – important structural functions for which strength and durability are necessary.  It is necessary for good health.  It doesn’t mean that it can’t serve more decorative purposes, be they in architecture or even in jewelry.  It sounds like what might be a sturdy, stout hockey player whose main responsibilities are providing strength and structure, but one that might occasionally surprise with his ability to do the flashier things (one that might score, say, 19 goals in 47 games when his career average was 19 goals per 82 games).

Copper…the “Troy Brouwer” of the periodic table of the elements.

Posted by The Peerless at 1:32 AM No comments: