If neither Tomas Vokoun (groin) nor Michal Neuvirth (who apparently suffered a knee injury in last night’s game against Florida) is able to return to the lineup for a while, few folks will give the Washington Capitals much of a chance to go far in the playoffs. Teams with their number three goalie on the depth chart having to step in to the lineup are not expected to have what it takes at the most important position on the ice in the post season.

The Washington Capitals, however, are probably in better shape than most when it comes to enduring assaults to their goaltending depth. If one takes a look at how other playoff-eligible teams might have to deploy goalies if reduced to their third string goaltender, here is what it looks like (selections with no NHL games are based on AHL games experience): 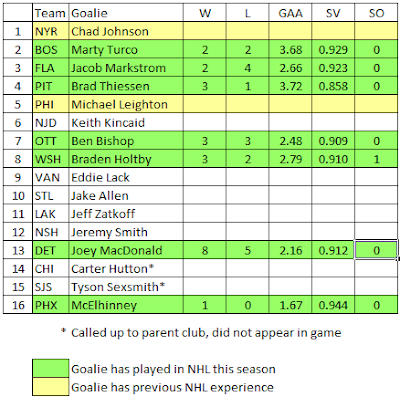 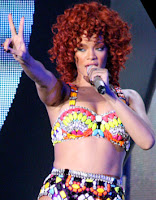 On Tuesday we wondered if some of the Washington Capitals who came through the system and achieved success at the AHL level would find their “Inner Hershey” in time to propel the Caps to the playoffs. On Thursday, they did. The Capitals got goals from Jay Beagle, Brooks Laich, Alexander Ovechkin, and Alexander Semin to lead the Caps to a 4-2 win over the Florida Panthers.

And while the Caps were getting production from the Alexes and a couple of Hershey alumni, another pair of Bears alumni – Michal Neuvirth and Braden Holtby – combined to stop 25 of 27 shots and kept the Panthers from extending the game past 60 minutes. The trouble is, when a team employs two goaltenders in a win, it doesn’t generally result from good things happening. And from a goaltending standpoint, things could hardly have been worse.

With 5:37 gone in the second period, Dmitri Kulikov sent a shot to the Capitals’ net that was blocked by John Carlson. Meanwhile, Marco Sturm was going to the net for the Panthers. He got tangled up with Neuvirth, and both fell backwards in the crease. Sturm landed on Neuvirth’s left knee which was bent back awkwardly. Neuvirth needed assistance to leave the ice and get to the Capitals’ locker room and did not return. After the game, coach Dale Hunter would describe him as “day-to-day” with a “lower body injury.”

Enter Braden Holtby, The young goaltender had been uneven in his five appearances before Thursday’s game, culminating in a disappointing performance against the Buffalo Sabres in which he allowed three goals on 18 shots and was pulled in a 5-1 loss. Fans might have been forgiven for thinking that the Caps’ season was about to end in cruel fashion, even though the Caps held a 1-0 lead at the time on a goal by Jay Beagle in the first period.

But barely two minutes after Holtby took over, Alex Ovechkin put the Caps up by two on a broken play. Ovechkin picked up a loose puck just inside his own blue line and skated down the left wing. As he broke into the Panthers’ zone, he tried to pull the puck back and deke around Floirida defenseman Mike Weaver. Weaver poked the puck off Ovechkin’s stick, but Marcus Johansson picked it up trailing Ovechkin. As Laich moved up, Oveckhin circled around Weaver and headed to the net. As he was doing so, Laich fired a shot that goalie Jose Theodore stopped with his right pade. The rebound came out and onto Oveckin’s stick. He nudged it across the top of the crease, and as Theodore tried to lunge to cover the open side of the net, Ovechkin beat him there with a flick of the wrists for the Caps’ second goal.

Exactly two minutes later Brooks Laich put the Caps up three off a feed from Keith Aucoin. Then the adventure began in earnest. Mikael Samuelsson scored his third goal against Washington this season late in the third period with a snap shot over Holtby’s glove on the long side, a shot that Holtby probably wants back. Then, the Panthers scored a goal that could only be described as the typical sort that eludes Capital goaltenders in big games. Brian Campbell skated into the Caps’ zone along the right wing wall and held the puck until his defensive partner Ed Jovanovski could find an opening for a pass. Campbell sent the puck across, but it was deflected by Matt Hendricks. Jovanovski gloved it down, they sent a harmless enough looking shot toward Holtby that the goalie appeared to have a bead on. On its way through, the puck hit a stick and knuckled up. Holtby appeared to lose track of the tumbling puck and couldn’t get his glove on it before it floated by him to bring the Panthers within one.

At this point Caps fans were probably resigned to the fact that Florida would do what they do – somehow get a tying goal that would get them to overtime, secure a standings point, and clinch the Southeast Division title, whatever the outcome in extra time. But Alexander Semin put an end to that with a wicked backhand over Theodore’s left shoulder after he walked out from the right wing corner and before defenseman Brian Campbell could close on him. The sign of relief in Verizon Center was a full-throated roar that the Caps had finally clinched a playoff spot in Game 81.

-- Even with the loss, Florida is in the playoffs, too. The Caps and Panthers are in by virtue of the Buffalo Sabres’ 2-1 loss in Philadelphia to the Flyers. The Panthers can finish third in the Eastern Conference and win the Southeast Division with a win or extra time loss to Carolina in their finale on Saturday. If they lose in regulation, and the Caps beat the Rangers on Saturday, Florida gets eighth place and the Rangers in the first round. The Caps would win the Southeast, secure the number three seed and face New Jersey in the first round.


…it was a big night for Bears.

-- Then there was the fact that this game was played four years to the day after the Caps clinched a playoff spot against these same Florida Panthers. Four years later, what would the youngsters who played that night do with four years of experience under their belts…


-- Then again, while we loved Matt Hendricks’ compete level in this game, his getting 15:29 in even strength ice time to 15:15 for Ovechkin does not compute. In fact, six forwards had more even-strength ice time than Ovechkin (Hendricks, Backstrom, Semin, Beagle, Troy Brouwer, and Jason Chimera).

-- Fourteen different Caps had at least one blocked shot, 13 had hits (the Caps were credited with 40 hits for the game with Brouwer, Hendricks, and Carlson having six apiece).

-- The Caps held the Panthers to a total of 39 shot attempts for the game (they had 70 of their own).

In the end, this was a team effort. The team got points from ten different players. The team came together to give Braden Holtby support when he came in unexpectedly. The team got solid performances from players one expects and from those who need to chip in secondary scoring and solid play away from the puck. Even if it was the kind of effort that was lacking on too many nights over the first 80 games, it was certainly welcome in Game 81. Now they are in, where it is said “anything can happen.” No one is interested in “anything.” Just win. That’s the thing.
Posted by The Peerless at 12:00 AM No comments: