The Peerless Prognosticator is ON THE AIR!!! -- Game 25: Devils at Capitals, November 30th

The Washington Capitals return to the ice on Friday night in one of the more unusual games on the schedule.  The Caps will be hosting a familiar foe, the divisional rival New Jersey Devils, at Capital One Arena.  The odd part of the matchup is that both teams will be taking the ice after three full days off, the Caps last skating on Monday night in a 4-1 win over the New York Islanders, and the Devils skating that same evening in a 4-3 overtime loss to the Florida Panthers.

The Devils are a club that has fallen into a deep rut.  They opened the season winners of their first four games, but since then have managed to win consecutive games only once and are 5-10-4 in their last 19 games to fall into the cellar of the Metropolitan Division.  As one might expect in such a drought, the Devils have been ineffective on both sides of the puck, being outscored by a 72-51 margin in those 19 games.

Taylor Hall has not been a problem in providing offense.  He has a hand in 20 of those 51 points over those 19 games (7-13-20).  It just has not been enough.  Over that 19-game span, the Devils are just 3-2-1 when Hall recorded a goal and 4-5-3 when he recorded a point.  Hall does, however, have a strange number on this year’s ledger he and the Devils want to address – zero.  After recording 13 power play goals last season, tying a career high set in 2011-2012 with the Edmonton Oilers, Hall has yet to score a power play goal this season.  He has never gone a full season without scoring at least three power play goals.  He has been rather adept at setting up power play goals, though.  Earlier this season, Hall had a six-game streak with at least one power play assist as part of a longer run of power play assists in nine of 11 games.  However, he does not have a power play point in his last 11 games.  Perhaps not coincidentally, the Devils are 3-5-3 in those games.  In 12 career games against the Caps, Hall is 3-3-6, minus-2.

Kyle Palmieri started this season in gangbusters fashion.  He had two goals in each of his first three games and seven goals in his first four games overall.  While it has not been exactly crickets since then, he has only five goals in 19 games since then.  It is not as if Palmieri’s goal scoring overall (12 goals in 23 games) is a fluke, but it does seem to be on a pace to arrest a disturbing (for Devils fans) downward trend.  After three rather pedestrian years in goal scoring from 2012-2013 through 2014-2015 in which he had a pair of 14-goal seasons and one of ten goals, he hit the 30-goal mark in 2015-2016.  That was, and remains a career best.  In the following two seasons he dropped to 26 goals and then 24 (in only 62 games) last season.  His overall improvement this year comes with a caveat, though.  Through 23 games he is on a 43-goal pace per 82 games.  However, that goal scoring pace over his last 19 games is one of 22 goals per 82 games.  Which Palmieri takes over heading toward midseason will go a long way in determining if this club has any chance of climbing back into the playoff race.  Palmieri is 5-3-8, plus-1, in 15 career games against Washington.

Once upon a time, Cory Schneider was a prospect of whom great things were expected.  And over a six-year period ending with the 2015-2016 season he posted a .926 save percentage in 260 games played.  No goalie over that six-year period appearing in 50 or more games had a better cumulative save percentage.  But over the next two seasons, injury and illness, coupled with inconsistency, limited him to 100 total appearances and a save percentage of just .908.  That was mere prelude to what has been a disastrous start to this season.  He did not make his first appearance until October 30th, the result of recuperating from a hip injury.  Since returning to action, he is 0-5-0, 4.28, .863, and the conversation has turned to whether he needs to find his game somewhere other than on the parent roster.

Schneider’s troubles opened the way for Keith Kinkaid to take over at the position.  He might not be a long-term answer for the Devils, but he is at least treading water.  His 9-5-4 record is adequate, while his goals against average (2.72) and save percentage .912) are middle of the road in goalie rankings (22nd in GAA and 21st in save percentage among 41 goalies with at least 500 minutes played).  Those goals against and save percentage numbers are precisely what his career numbers are in those categories, giving the impression that in his sixth NHL season and with 129 career appearances, what one sees in him is what one gets.  He is a competent goalie, but not one around which a contender might be built, not unless the skaters are an uncommonly talented bunch (think of the recent vintages of the Pittsburgh Penguins).  Kinkaid is 3-3-0, 3.24, .882, with one shutout in six career appearances against the Caps, the shutout coming in the Devils’ 6-0 rout of the Caps earlier this season. 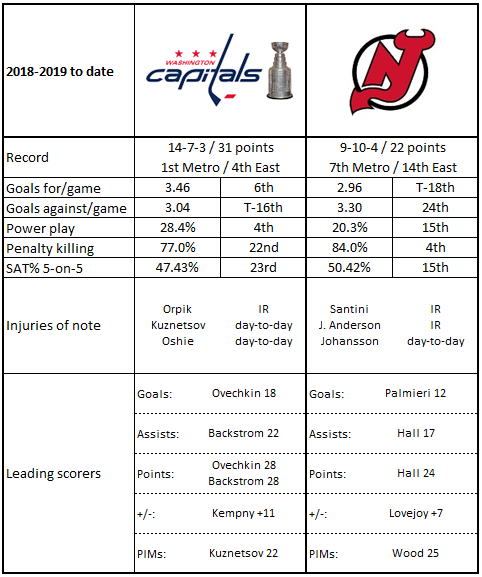 1.  More on Kinkaid.  If you are a fan of free hockey, he’s been your guy lately.  In three of his last four performances, the Devils went to overtime.  Caps fans might have particular reason to like this.  Kinkaid lost all three games.

2.  The Devils are one of three teams this season without a goal in overtime.  Montreal and St. Louis are the others (Montreal does have two Gimmick wins).

4.  The Devils lose big, too.  Only Philadelphia has more losses by three or more goals (nine) in the Eastern Conference than New Jersey (seven).

5.  No club has fewer wins when scored upon first than New Jersey (one).  Only Los Angeles and San Jose hav a worse winning percentage when allowing the first goal (.071 and .111, respectively) than the Devils (.125).

1.  Only Minnesota has more wins when allowing the first goal of games (nine) than Washington (seven).

2.  The Caps do not get blown out often.  Only three times this season have the Caps lost a game by three or more goals.  Only three teams have fewer such losses – Calgary, Detroit, and Nashville (two apiece).

3.  Washington likes to apply more power on home ice.  The Caps lead the league in power play goals scored at home (15) and have the league’s third-best home power play (34.1 percent).

In seven seasons as a Washington Capital, Marcus Johansson missed a total of 39 games.   Last year, in his first season with the New Jersey Devils, Johansson missed 53 games to an ankle injury and two separate concussions, the latter of which kept him out of the team’s last 35 regular season and first two playoff games.  He missed one game to illness and the game this past Monday, but he has otherwise appeared in 21 games (it is anticipated he could dress for Friday’s game in Washington).  He is looking to get some traction in terms of production with his new club.  In an abbreviated season and change, Johansson is only 8-14-22, minus-19, in 50 games.  What he has done with more frequency this season than in any previous season is shoot the puck.  He is averaging 1.86 shots on goal per game, a career high.  It has not done him much good, though, his shooting at a 7.7 percent rate challenging his career worst (7.5 percent in 2013-2014 with the Caps).  One thing to watch for from Johansson in this game is his ice presence.  While he has four points at home this season and four on the road, he is a plus-2 in Newark, but only a minus-10 in 11 road games played.  In four career games against his former club, Johansson is 1-3-4, even.

For some forwards, the development of the offensive part of their game is the last piece of their game to come together.  Some players are more physical at the start of their careers before their offensive games starts to emerge.  Think “Tom Wilson” as an example.  For others, they are diligent in the little things – checking, playing solid defense, using speed and skating to neutralize opponents – before their offensive games blossom.  Chandler Stephenson might be in this second group.  He gets a decent helping of ice time (averaging 13:11 per game) for a bottom-six forward and gets a regular turn killing penalties (1:58 per game, fourth among all Caps forwards).  However, his offense has not been as noticeable, and if anything, he is behind where he was last season.

Recall that last season Stephenson was 6-12-18, plus-13 in 67 games in his rookie campaign.  He was an infrequent shooter (36 shots on goal in 67 games) but an efficient one (16.7 shooting percentage).  So far this season, he remains an infrequent shooter (15 shots on goal in 24 games, only three games with as many as two shots on goal, 12 with no shots on goal), but his efficiency has not kept up.  He has one goal on 15 shots (6.7 percent), and he has only two points in 19 games since recording his only goal of the season back on October 13th against Toronto.  Stephenson doesn’t have to be a prolific scorer; he doesn’t need to score in double digits for the Caps to be successful.  Watching to see if that offensive part of his game emerges is something worth watching.  Stephenson is 0-1-1, even, in five career games against the Devils.

This Devils team might be quite similar to the one that steamrolled the Caps in the second week of the season, but it is not performing at nearly that level over the last several weeks.  Since they opened the season with a four-game winning streak, their 5-10-4 record is worst in the league.  Needless to say, this is a situation of which the Caps should take advantage.   The Caps will be fighting the headwinds of injuries to a number of skaters – Evgeny Kuznetsov, T.J. Oshie, Brooks Orpik, Michal Kempny, Devante Smith-Pelly – but the Devils are in such a rut that the Caps have enough weapons on hand to deal them another blow.