Washington Capitals: That Was The Week That Was - Week 10

If Week 9 was an eventful week for the Washington Capitals in some unfortunate ways -- Tom Wilson’s suspension, Lars Eller’s injury – then Week 10 was eventful in a good way.  A winning week, a goal streak, and even with a loss in the last game of the week, the Caps were once more sitting atop the East Division. 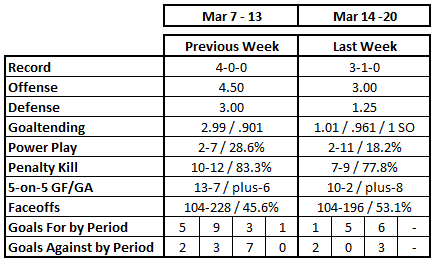 It was an odd week in terms of wins and losses.  In order, the Caps had their largest margin of victory for the season (a 6-0 win over Buffalo to start the week), perhaps their best overall game of the season in a 3-1 win over the New York Islanders, a come-from-behind win against the New York Rangers, and a loss to the Rangers in which they dominated in most aspects of the game but allowed a late tie-breaking goal and an empty netter to end a seven-game winning streak.  Even with the week ending loss, the Caps finished Week 10 with the best record in the league over their last 18 games since February 16th (14-3-1).  And, with the win over Buffalo to start the week, the Caps won their tenth road game of the season.  They wrapped up the week as one of four teams in the league with at least ten wins at home and at least ten wins on the road (Tampa Bay, Florida, and Carolina are the others). 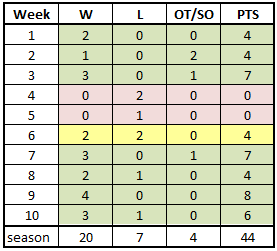 It was a week of declining output on offense, half of the week’s scoring coming in the first game of the week (six goals against Buffalo), followed by games of three, two, and one goals.  The Caps were quite efficient against the Sabres, potting six goals on 30 shots (20.0 percent), not much of a surprise against the 28th-ranked scoring defense in the league and 30th-ranked scoring defense on home ice.  The Caps struggled as the week wore on, though, scoring three goals on 22 shots against the Islanders (13.6 percent), two goals on 18 shots in the first game against the Rangers (11.1 percent), and one goal on 29 shots in the rematch against the Rangers (3.5 percent).

Eight Capitals recorded goals for the week, led by Alex Ovechkin, who had four goals in the first three games of the week, including two game-winners, before he was blanked in the last game of the week to end a five-game goal streak.  The four goals allowed him to catch and pass Phil Esposito for sixth-place on the all-time goal scoring list.  Nicklas Backstrom was the other Capital with a multi-goal week (two), and Evgeny Kuznetsov had the other game-winning goal.

It was a combination that resulted in only two 5-on-5 goals scored against the Caps for the week, tied with Tampa Bay for fewest in the league.  Three Caps were on ice for two even strength goals against – John Carlson, Evgeny Kuznetsov, and Alex Ovechkin.  At the other end, four Caps playing in all four games were on ice for no even strength goals against – Nicklas Backstrom, Conor Sheary, Richard Panik, and Dmitry Orlov.

Week 10 was one of those rare weeks this season in which the goaltending duties were split roughly down the middle.  Ilya Samsonov got two starts, logging 118:18 in ice time, and Vitek Vanecek had two starts, playing 120 minutes.  Both had excellent numbers. Samsonov was 1-1-0, 1.52, .935 for the week, but Vanecek was even better, going 2-0-0, 0.50, .982 and posting his first career shutout in the Caps’ 6-0 win over Buffalo to start the week.

Vanecek was a perfect 46-for-46 in the last 40 minutes of games and did not allow an even strength goal in his 118 minutes of play.   Samsonov allowed only two even strength goals for the week on 40 even strength shots faced.  The two games Samsonov had this week were his first games on home ice this season after going 5-0-1 I seven road appearances (one no-decision).

For about five minutes, the Caps’ power play was quite good in Week 10.  Alex Ovechkin and Nicklas Backstrom scored power play goals just over five minutes apart straddling the second and third periods in the Caps’ 3-1 win over the New York Islanders in the second game of the week.  Other than that, it was a dry well, going without one in nine other chances.

The confounding part of the week was the Caps absence of any success against the New York Rangers.  An 0-for-5 effort over two games left the Caps 0-for-13 in four games against the New Yorkers.  Washington is the only team the Rangers have faced who have yet to record a single power goal against.  An odd parenthetical to that fact, the Rangers are just 29-for 38/76.3 percent in penalty killing against the weakest teams in the division (New Jersey, Buffalo, and Philadelphia).  However, they are 55-for-59/93.2 percent against the four teams in the playoff mix (the Caps, Pittsburgh, Boston, and the Islanders).

Washington managed only 12 power play shots on goal in 20:18 of power play ice time.  Alex Ovechkin had almost half of those shots (five) with T.J. Oshie, Nicklas Backstrom, and Evgeny Kuznetsov recording a pair of shots apiece.  Jakub Vrana had the other shot on goal to complete the record. 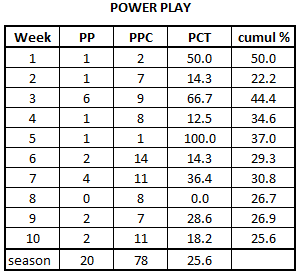 The Caps did a reasonable job in holding down power play chances for opponents, allowing only nine such chances in four games (a welcome development after allowing 43 chances over the previous four weeks) and not allowing more than three in any single game.  It was that efficiency, plus allowing only 11 power play shots 16:37 of ice time that allowed the Caps to break even on special teams for the week with two goals scored and two goals allowed. 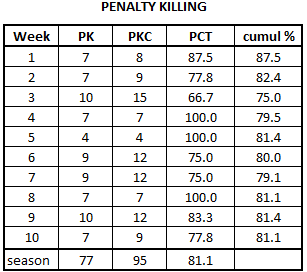 It was a very good week for the Caps in the faceoff circle.  They topped 50 percent in all three zones for the week and were better in the ends (55.0 percent in the offensive end, 52.6 percent in the defensive end) than they were in the neutral zone (51.7 percent).  And while the Rangers finished the week as the worst team in the league in faceoff winning percentage, the Caps did also face the seventh and ninth ranked teams (the Islanders and Sabres, respectively).

Nic Dowd had an especially productive week.  His 66.7 percent wins ranked second in the league among 111 players taking at least 25 draws (David Krejci was first with 71.0 percent).  T.J. Oshie had a fine week as well, posting a 60.9 win percentage which would have ranked him 12th in that same group but for the fact he took 23 draws.

Among the other Caps taking at least ten draws for the week, Nicklas Backstrom and Evgeny Kuznetsov struggled, neither of them reaching 45 percent in wins. 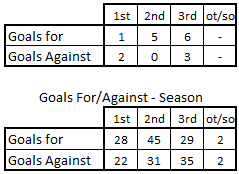 The Caps are making up some ground in the year-over-year numbers, not surprising given the recent seven-game winning streak.  One thing that does stand out is that over the first 31 games of the season, the Caps have recorded 102 fewer shots on goal than at a similar point last season, a 10.5 percent drop.  Shots on goal against are down, too, but the shot differential is deep into minus territory this season (minus-43) whereas last season through 31 games the Caps were at plus-9.  The Caps are slightly better in shooting percentage as a result of fewer shots (perhaps a product of quality versus quantity), recording a 12.0 percent shooting efficiency compared to 11.5 percent at a similar point last season.

The Caps have also been significantly more economical with the puck, recording 101 fewer giveaways than at a similar point last season.  How these are scored is a product of interpretation as much as anything else, but a 31.8 percent drop is significant, nonetheless. 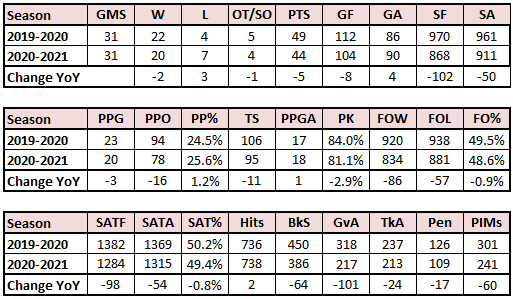 The loss to the Rangers to end the week aside, the Caps remain on a lengthy run of good fortune.  Continuing that trend will be important over the next seven games, six of which will be against teams not in the playoff mix (four against New Jersey, two against the Rangers).  The most encouraging signs coming out of Week 10 is the defensive stinginess exhibited by the Caps, perhaps a sign that things are become more instinctive than a product of thinking about assignments.  Maintaining that defensive focus will be one of, if not the most important ingredient to keeping the team at the top of the East Division heap.

Posted by The Peerless at 2:17 PM No comments: