You're probably going to see and hear a lot of commentary about the Caps, their less-than-scintillating start in the month of December, and the mantra of "who cares?...only the spring matters."

Well, believe that if you will, but do so at your peril.

Chances are you don't remember Semyon Varlamov pitching a shutout against the Lightning last December, or even the fact that the Caps didn't allow more than three goals in any of the 14 games they played last December.  You probably can't recall off the top of your head that the Caps went 8-5-0 in December 2009.

In other words, December can be a forgettable month in the hockey regular season.

But not lacking consequence.  Of the five Stanley Cup winners since the lockout...

-- Four of them recorded at least 18 standings points for the month (Chicago, Detroit, Carolina, and the Anaheim Ducks (9-5-0).

So far, the Caps are 1-2-1 in December and have been outscored 13-7 in getting there.  Their schedule isn't especially difficult over the rest of the month.  Not that any game on the calendar is easy, but the real land mines are games at Boston on December 18th, and against Pittsburgh and Montreal at home on December 23rd and 28th (the latter being the last game before the Winter Classic).  The rest of the games offer a chance for the Caps to do some damage to the standings, as opposed to the schedule doing damage to them.

You can say that only the playoffs matter, but it would not be correct to say that how you get to them doesn't.  Games now breed habits and trends.  Counting on being able to ramp up effort and performance to a higher level in the spring than what might be displayed right now might be problematic if what is being displayed right now is lackadasical or treated as less-than-important.  Other teams -- ones that might have built better habits -- will be ramping up their play in the spring, too.

By the way, one Stanley Cup winner had a lower-than-.500 record for the month of December in the season they won their Cup, 5-8-1 to be exact.

It eventually had consequences.
Posted by The Peerless at 9:05 AM 4 comments:

The Peerless Prognosticator is ON THE AIR!!! -- Caps vs. Panthers, December 9th

The Peerless Prognosticator is…

He’s going to Michigan for The Big Chill.

He’s going to Michigan to see a bad movie about some college friends who wish they were still in college?

No, he’s going to see The Big Chill at The Big House.

He’s going to see a bad movie in a jail in Michigan…and this is a vacation?

The Big Chill is a movie about a hockey game? What, as a metaphor for life?

No, you idiot. The Big Chill at The Big House is a hockey game…outdoors…in a football stadium. You know, Michigan Stadium? The Big House??

Why is he going to that one? Practicing for the real outdoor game on New Years?

Something like that. Now let’s get on with the prognostications while he finds his thermal bloomers.

OK, cuz. Sez here the Caps are playing the Florida Panthers. They suck, don’t they?

Yeah, well, so did Toronto and Jersey, and Carolina, too. And they either lost to those teams or made it a whole lot closer than they should have.

Are we supposed to do that numbers thing about now? 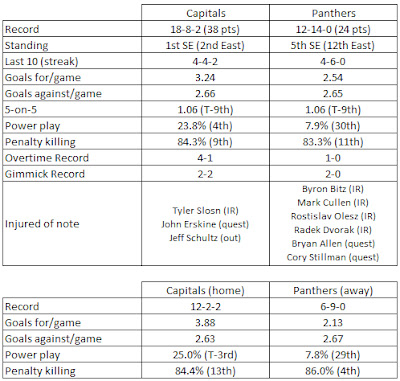 Yeah, and they’ve allowed more than three goals in regulation only once in their last nine games.

So there won’t be many red lights flashing tonight, eh?

You’d get that impression.

Here’s something… the Caps have three players with more than 30 points – Nicky and the Alexes. The Panthers don’t have any player with as many as 20 points.

Yeah, and the Caps have three players with at least ten goals – the same ones. The Panthers don’t have any with that number.

Second door on the left cuz, and make sure you wash your hands.

Comforting… anyway, Frolik had a five-game streak without points and an 11-game streak without a goal before potting a goal in regulation and one in the shootout in a 2-1 win over Phoenix last Saturday. He followed it up with an assist in a 4-3 overtime win over Colorado in his last game.

And what’s with having a raccoon playing goalie?

Hey, hey… can we do that ponderin’ thing now?

OK, go ahead. Who are you pondering.

Oh, really. Why is that.

Well, Peerless is going to Michigan, and Booth is from Michigan. How weird is that? Ain’t that worth ponderin’?

No, but maybe the fact that Booth isn’t quite back to where he was a couple of years ago when he scored 31 goals in 72 games is. A concussion suffered when he was hit by Philadelphia’s Mike Richards in an October 2009 game, then another when hit by Montreal’s Jaroslav Spacek late in that season put the brakes on what was a blossoming career. His progress back has been slow, but progress it is. He is the Panthers’ leading scorer and has goals in two of his last three games. He is 4-5-9 in 20 career games against the Caps. Now, do you have a Cap to ponder?

Not likely, at least not the “seven” part. But Semin does have three hat tricks this season so far, so the “three” part isn’t out of the question. Any “keys to the game,” cousin?

Given how the last couple of games for the Caps have gone, that might not be bad advice. Hey Peerless, is there anything we missed?

No, but have you seen my long johns?