The Hershey Bears are about to participate in their fourth Calder Cup final in the last five seasons. Winning the trophy would be the 11th time in Bears history that the Chocolate and White ended the season as AHL champions.

This year’s path to the finals has not been an easy one. In winning 12 games through three series thus far, the Bears captured seven of those 12 wins in overtime, an AHL playoff record for overtime wins in a playoff season.

One of the interesting things about the Bears and their seven playoff wins is that the seven overtime game-winning goals have come from the sticks of seven different players. Not only that, but the identity of the seven players suggests that the experience gained in a playoff setting can’t be underestimated as a factor dealing with the high-pressure situations that overtimes bring.

The seven players have combined for 385 career playoff games in the AHL and have a combined scoring line of 59-133-192, plus-53 in those games. For the record, here they are with their AHL playoff records…

And in case you have not noticed, goalie Michal Neuvirth is 7-2 in overtime playoff games over the last two post-seasons.

Nothing beats experience at this time of year. As disappointing as the end of this season was for the Capitals, one hopes that the 28 games of playoff experience earned over the past three seasons will be the platform from which the big club can launch a more successful Stanley Cup run next season.
Posted by The Peerless at 9:26 PM 1 comment:

John Erskine
Theme: “Do not worry about holding high position; worry rather about playing your proper role.”
-- Confucius

If you are going to look for John Erskine in the statistical tables at the NHL Web site, you are not going to find him very highly ranked in the summary tables – tied for 20th in total scoring for the Caps, tied for 24th in goals, tied for 19th in assists, no power play goals, no game-winning goals, and he finished with 50 shots on goal in 50 games played.

Head over to the “real time stats,” and you’ll see where the value of a player such as Erskine lies. He finished fifth on the team in hits (third in hits per game), fifth in blocked shots. And on a team that lacked a true bruiser to keep the peace, Erskine was part of enforcement-by-committee, finishing second on the club in fighting major penalties. And he hardly took on any shrinking violets in his four bouts. The opponents he faced – Chris Thorburn, David Koci, Georges Laraque, and Shawn Thornton – combined for 45 fights among them.

Erskine’s was a tough role to play, one that does not necessarily show up in his 10-game segments… 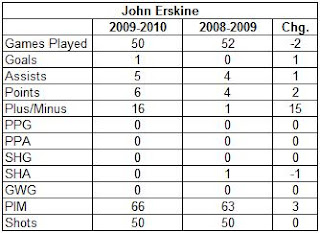 His numbers are somewhat lopsided in this respect – Erskine finished 0-1-1, plus-4 in 24 games against playoff teams. On the other hand, he was 1-4-5, plus-12 in 26 games against the teams failing to get a ticket to the dance. In fact, he was 1-4-5, plus-8 against the five teams he played against that finished with a winning percentage below .500 (Tampa Bay, Carolina, the Islanders, Florida, and Toronto). He was 0-0-0, minus-3 against Montreal in four regular season games, which might explain why he did not get the call during the playoffs.

Peering a little further into his numbers, Erskine (perhaps surprisingly) had the second best goals against/on ice-per 60 minutes at 5-on-5 of all Caps’ defensemen playing in at least 40 games (Jeff Schultz led the club). He also had the second best differential of goals against (on ice/off ice) per 60 minutes. But with that comes the fact that Erskine also faced the lowest quality of competition among that same group of defensemen.

Erskine is as close as the Caps have to a physical defenseman. As such, he is expected to walk a fine line along the edge of the rules from time to time. This year he showed a considerable amount of discipline when it came to taking minor penalties. The 18 minors he took in 50 games is half the number he took (38) in 51 games two seasons ago, and it was six fewer than he took in 52 games in 2008-2009. The difference is a reduction in the number of “obstruction” penalties (holding, holding the stick, hooking, tripping, interference). In 2007-2009 Erskine committed 19 such penalties among the 36 minors he recorded. This past season, that number was reduced to ten. The more physical infrations (roughing, boarding, slashing, instigating, elbowing, cross checking, high sticking, kneeing) went from 14 in 2007-2008 to eight this past season.

Erskine is entering the last year of a contract that will pay him $1,275,000 next season. Assuming that John Carlson and Karl Alzner make the big club next season, and Jeff Schultz is re-signed, Erskine is one of seven defensemen under contract for next season (this number does not include free agents Shaone Morrisonn, Milan Jurcina, or Joe Corvo). He has played 51, 52, and 50 games for the Caps over the past three seasons, missing 48 games to injury and the rest to other scratches. That would seem to be where his best mix of games lies – somewhere in the 50 game range as a 6/7 defenseman, either filling in for injury, playing against teams where a physical presence is needed, or taking the ice where the shortcomings he has cannot be taken advantage of effectively by opponents. It isn’t a role likely to be much heralded, but it is one that Erskine can play adequately for this team moving forward.

Tyler Sloan
Theme: “Use what talents you possess; the woods would be very silent if no birds sang there except those that sang best.”

Tyler Sloan is the sort of player who might be said to put the “journey” in journeyman. Over the past ten years he has pulled on a sweater for the Kamloops Blazers, Syracuse Crunch, Dayton Bombers, Las Vegas Wranglers, Hershey Bears, and finally, the Washington Capitals. He saw his first NHL action last in 2008-2009 at age 27, getting into 26 games before the NHL portion of his season ended in early January 2009.

This year, he dressed for 40 games, but the odd part of it was that while he did get into more games, he did so with a lower average ice time (14:14, compared to 16:38 the previous year). His ten-game splits do not show much… 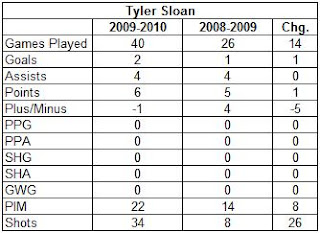 …but then again, his appearances in the lineup were spotty –no fewer than three games in any ten-game split, no more than eight.

Delving a little deeper into his five-on-five numbers, despite the fact that Sloan faced rather meager competition (only John Erskine, among Caps defensemen playing in at least 40 games, played against lesser competition), he had the second highest goals against/on ice-per 60 minutes (Caps who played the entire year in DC). He also had the second worst plus/minus differential) on ice/off ice) per 60 minutes.

Sloan was similarly situated in 4-on-5 situations among Caps defensemen. He had the worst goals against/on ice-per 60 minutes and had the second worst plus/minus differential (on ice/off ice) per 60 minutes. That he had only 1:01 in average penalty killing time (seventh among Caps spending the entire year with the team) was perhaps a good thing.

Sloan got a taste of playoff action in Games 4 and 5 of the Montreal series when Shaone Morrisonn went out with an injury. The Caps split the games with Sloan averaging just over 13 minutes of ice time. He was on the ice for two of the five goals scored against the Caps in the two games.

Sloan is probably not a 70-game, 15 minute a night defenseman. He is, however, useful as a player who can plug a hole for a week or so at a time in the event of injury. Although he skated only two games in Hershey this season, the role he plays is somewhat typical of how the Caps have used the Bears. There are a lot of guys up the road who have come down the road to fill a role in a pinch. For example, last night’s Hershey lineup in their AHL Eastern Conference-clinching win over Manchester featured 12 players (of 20 who dressed) who played in DC over the past two seasons. And that does not include Steve Pinizzotto or Braden Holtby, both of whom were recalled to Washington but did not dress, nor Andrew Gordon, who is injured for Hershey and did not dress last night.

With the advancement of John Carlson on a permanent basis next season (unless the sun stops in the sky) and the likely advancement of Karl Alzner, it could be very difficult for Sloan to find any minutes on this club except in a pinch, even though he does have two more years under contract with the Caps. For this year, however…

We have remarked from time to time about the amazing consistency of Alex Ovechkin. That is the manic consistency of scoring goals at a lofty pace. Shaone Morrisonn might be said to express a consistency of his own, that of a more understated sort. In five full seasons with the Caps, Morrisonn has been almost a metronome played at the pace of a slow stroll. Here is how his seasons have played out…

His ten-game segments show a similar modest consistency in offense… 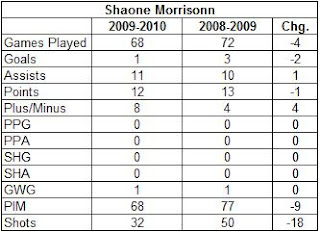 …but there is the matter of his being minus-7 in his last 13 games. It was not an expected result on a team that was 9-1-3 in those 13 games. Then again, of the 35 goals scored against the Caps in those 13 games, Morrisonn was on the ice for 17 of them, 15 of those at even strength.

Morrisonn led Caps defensemen in penalty minutes this season (68). Of the 18 minor penalties he took, 12 of them were of the obstruction sort (holding the stick, hooking, interference, tripping, holding).

Morrison has been consistent over the years, but has he improved? Consider these 5-on-5 numbers (all from behindthenet.ca)…

And looking at the same numbers at 4-on-5…

The progress of his performance has been somewhat uneven – somewhat better in penalty killing, somewhat off at 5-on-5.

The playoffs were a bit of a lost cause for Morrisonn, who missed two games to an injury in the seven-game set. One thing of particular note was that he had his minutes limited, more than a minute and a half less average ice time (15:54) than he averaged during the regular season (17:34), although his average number of shifts per game was almost unchanged (22.8 to 22.4). Some of that ice time might have been the effect of the emergence of John Carlson. Only two Caps defensemen averaged more than 20 minutes a night in the regular season – Mike Green and Tom Poti. Carlson’s getting more than 20 minutes a game in the Montreal series, in addition to that of Green and Poti, likely chopped a bit into Morrisonn’s time.

This is a crossroads summer for Morrisonn. In his five seasons (plus three games) with the Caps, he signed four contracts as a restricted free agent (August 2005, July 2006, July 2008, and July 2009), once as a product of arbitration. Now, he is an unrestricted free agent, and he is being pushed on the roster by youngsters Carlson and Karl Alzner. At 27, Morrisonn is entering what should be the prime of his career, but his consistency over the past several years suggests that has reached his niche as a stay-at-home defenseman who has a certain amount of grit to him (he played through a broken jaw and separated shoulder in the 2008 playoffs). Whether that is going to persuade the Caps to be the team to give him a raise is just one more contract issue Caps fans might be watching this summer. But for this year, it is a grade consistent with last year’s performance…