The Peerless Prognosticator is ON THE AIR!!! -- A "Two-Fer"...Caps vs. Panthers, November 6th/7th

Tonight and tomorrow night, it’s the only “Super” back-to-back of the season for the Capitals. Games on consecutive days against the same opponent – the Florida Panthers. The Caps will visit south Florida tonight, and then the clubs will return to DC on Saturday to complete the twin-bill. So what about the Sunshine State? It’s sunny a lot of the time (but never at night), there are a lot of old folks there, and they have trouble counting votes. But what else do we know about this mysterious state? Glad you asked…

- A museum in Sanibel owns 2 million shells and claims to be the world's only museum devoted solely to mollusks.

- Niceville is home to the famous Boggy Bayou Mullet Festival celebrated the third weekend in October. Rats… and we were looking forward to some boggy bayou badness.

- Miami Beach pharmacist Benjamin Green invented the first suntan cream in 1944. He accomplished this development by cooking cocoa butter in a granite coffee pot on his wife's stove. We're guessing the missus made really bad coffee.

- On May 20, 1970 Florida lawmakers passed and sent to the Governor a bill adopting the moonstone as the official state gem. Ironically, the moonstone is not found naturally in Florida...nor was it found on the moon. We're thinking it might be something that was surgically removed from Don Shula's tuchas years ago.

- The city of Hypoluxo's name comes from the Seminole expression water all 'round -- no get out. In other words, a hockey rink.

- Fort Lauderdale is known as the Venice of America because the city has 185 miles of local waterways.

- Venice is known as the Shark Tooth Capital of the World. Collecting prehistoric sharks’ teeth has been a favorite pastime of visitors and residents of the Venice area for years. Funny, we would have thought Venice would be known as the “Fort Lauderdale” of the west coast of Florida.

(source: 50states.com... the wisecracks are ours)

Well, speaking of “two,” this is a two-fer, mainly because we’re lazy. The Caps will be taking on the Panthers in a pair of contests that have “we will crush them like a palmetto bug” written all over them. Why? Shoot, look at the numbers… 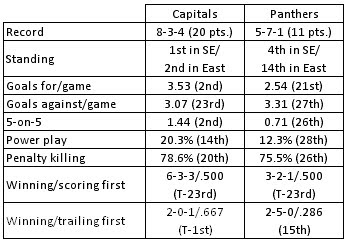 The Caps average a goal a game more than do the Panthers, give up a third of a goal less per game, have almost double the power play success (on a percentage basis), have a better penalty kill (although neither is especially good), and they can actually come back from giving up the first goal on those rare occasions when they do fall behind first.

You’d think these games would be over before the old folks head to bed.

Well, these are the Caps, and they are now nursing a three-game winless streak (0-1-2), while Florida has won three in a row. In doing so, the Panthers have outscored their opponents, 12-5 (not including the Gimmick goal that got the mini-streak started), and Tomas Vokoun has shutouts in each of his last two games – a 4-0 win in St. Louis and a 3-0 win over Carolina. Florida hasn’t done it with their power play, going 1-for-10 in the three wins. They have been light’s out on the penalty kill, though, skating off 11 of 12 shorthanded situations.

As far as threats go, you can start with Steve Reinprecht. Now that you realize he’s still in the league (after spending three-plus years in the desert… no, really – Phoenix), we can tell you that he has nine goals in 13 games. He would seem a lock to finish the year with a career high (that currently being the 22 he had, split between Calgary and Phoenix, in 2005-2006). He has five in his last four games, including a hat trick against Dallas on October 30th. We would tell you what his career numbers are against the Caps, but they would hardly be relevant. He hasn’t played a game against Washington since the 2003-2004 season (as a Calgary Flame -- one game, no points, six shots on goal).

Among the home-grown Panthers, Nathan Horton is coming in on a hot streak. His 3-7-10, even, for the season doesn’t look especially impressive. However, he is 1-6-7, plus-6 in his last four games. He is coming into this game with a 6-7-13, minus-2, career record against the Caps, but he’s struggled of late. In his last 12 games against Washington, he is only 1-2-3, minus-1.

One player the Panthers miss and will miss this weekend is David Booth. The object of an open-ice hit from Philadelphia’s Mike Richards on October 24th, Booth said yesterday that he expected to start exercising today or on Saturday. He has participated in no strenuous physical activity since suffering a concussion as a result of the hit. Last year, Booth was 2-3-5 in five games against the Caps.

One might have expected that the missing offense for the Panthers with Booth out would have been picked up by Cory Stillman, Stephen Weiss, and Rostislav Olesz among the forwards. As a group, they are 9-10-19, minus-9, for the season. Since Booth’s injury, they are a combined 5-3-8, plus-5, in four games. Along with Reinprecht’s five goals, they account for two-thirds of the 15 goals the Panthers have in their last four games.

On defense, the Panthers have been healthy. Six defensemen have played in all 13 games to date. One of them happens to be Dmitri Kulikov, the 14th overall pick in last June’s entry draft. It can be said that he’s struggled so far. He has four assists (only one in seven games since October 16th), and he has yet to finish a game on the plus side of the ledger in putting together a minus-9 rating.

Bryan Allen is in similar plus-minus territory, but under different circumstances. He was on the ice for five even-strength goals in a 7-2 loss to Carolina on October 9th. Since then he’s been relatively steady, going 1-1-2, plus-1, in his last eight games. It’s not bad for a guy who missed the last 80 games of the 2008-2009 season with a knee injury.

The Caps will also be renewing acquaintances with Dennis Seidenberg, who manned the blue line for Carolina for the last two years, plus 20 games of the 2006-2007 season. In that time as a Hurricane, Seidenberg was 0-5-5, even, in 12 games against the Caps.

In goal, it’s a tale of very different fortunes for Tomas Vokoun and Scott Clemmensen. Vokoun had a crummy start to the year. He won on opening night in Finland, a 4-3 win over the Chicago Blackhawks. Then, he went 0-7-1 in his next eight games, leaving him 1-7-1, 3.71, .906 after nine games. His problem was that he was facing a ton of shots – twice more than 40 and 55 shots in that season opener. It was no wonder he didn’t allow fewer than three goals in any of his first eight games. In his last two, though, he faced 34 and 32 shots, stopping all 66 of them for two shutout wins.

For Scott Clemmensen, it’s been as if he was still backstopping Marty in New Jersey. He’s been in three games so far with two decisions (2-0-0). His other numbers, though, are pretty grim – a 4.25 GAA and .866 save percentage. He’s given up seven goals on his last 40 shots faced over two games (.825 save percentage).

3. No blanks. The Young Guns had a pretty grim game against New Jersey, save for Nicklas Backstrom’s performance on face-offs. We’d hate to think that Ovechkin’s absence will expose them as “pop guns.”

In the end, these are two games that should not be especially competitive. But the Caps just haven’t been able to muster a full 60 minutes of effort against bottom feeders. They play these teams as if they are bored with the whole exercise. That means a couple of close ones, and maybe even some boos on Saturday. But in the end, the Caps are just too far above Florida on the skill scale…