The Peerless Prognosticator is ON THE AIR!!! -- Caps vs. Hurricanes, November 28th

Thanksgiving weekend comes to an end this afternoon with the Caps hosting the Carolina Hurricanes, where…

…what in heaven’s name is THIS?!

“Leftovers.”
And what road did you scrape them off of, Cheerless?

“No roadkill, cuz…I’m savin’ that fer Christmas.”
You mean you already…

“Don’t ask, cousin. It’s better you don’t know.”
Yeah, alright Fearless, but what in great Caesar’s ghost is THIS?!


“Well, this is ‘gobbler cobbler.’”
Turkey and vegetables in a pie crust?

“No, cranberries and gravy.”
Well, at least we have an excuse for passing on that family recipe. We have a game tonight. The Caps and the Hurricanes played just this past Wednesday in Raleigh, and not much has changed in the numbers since we previewed that contest. But here are the updated numbers… 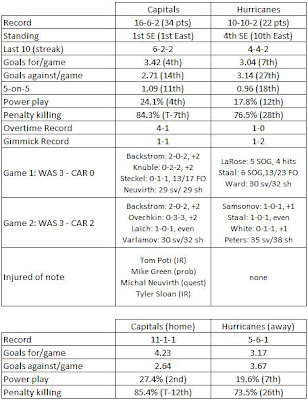 This is the third game in the season series between these teams, the Caps having won the first two. In those two games the Caps have seen a reversal of roles between two of their most important players. In the normal course of events you would expect that Nicklas Backstrom would set the table, and Alex Ovechkin would score the goals. Not so in this series. It is Ovechkin with four assists in the two games and Backstrom with four goals evenly split between the two contests. Ovechkin comes into this game with five points in his last two contests, all assists. Meanwhile, Backstrom is 2-2-4 in his last two games.

If there is a surprise among the scorers in this series for the Caps, it would be Alexander Semin. So far this season Semin has faced seven opponents in at least two games, and Carolina is the only one against which he has yet to register a point. That is especially surprising in that coming into the season Semin scored more goals and points against the Hurricanes than he had against any other NHL team (23 and 38, respectively, in 23 career games). He had a hat trick in his last game, a 6-0 Caps win over Tampa Bay (his third of the year, all recorded in the last 17 games). The hat trick follows a four-game streak in which Semin did not record a goal.

Mike Knuble returned to the lineup after a three-game absence, courtesy of a puck to the jaw in the second period of a 5-0 loss to Atlanta on November 19th. He is the only other Cap with more than one point against the Hurricanes this year, picking up a pair of assists in the 3-0 win over Carolina on October 27th. It is the only multi-point game among the 21 contests in which Knuble has participated so far this season in what has been a disappointing 3-5-8, plus-4 start. He has not had a lot of success against the Hurricanes in the past – 6-14-20 in 45 career games against Carolina to date.

In case you haven’t noticed, and chances are you haven’t, defenseman John Erskine has already set a career high in goals for a season (three). And if that was not enough, he scored those three goals over the past ten games. That ten-game total would equal that of his blueline teammate Mike Green. It is part of a larger contribution among the defensemen through 24 games. Only one defenseman among the seven that have played in more than five games has not recorded a goal (Jeff Schultz). The defense has 18 percent of the Caps’ goal total so far and is on a pace to score 62 goals, an increase of 25 above the total they put in the books last season.

The Caps have used three goaltenders so far, and all of them have at least four appearances in the 24 games played to date. For those Caps fans who spent the last couple of years opining about whether the Caps should move Michal Neuvirth, Semyon Varlamov, or Braden Holtby, how is that depth thing working for you these days? Holtby had a cup o’ coffee with the team lasting for five appearances. He showed the promise he has in shutting down Boston and Philadelphia in his first two NHL appearances, one a relief appearance against the Bruins in which he held the Bruins off the scoreboard in the last ten minutes for his first NHL win, and the other a 23-save effort in a a 3-2 overtime win over the Flyers.

Semyon Varlamov was supposed to be the starter when the season began, but the annual groin injury arrived early. He has appeared in only four games so far, only two this month. But those two games so far in November have enabled him to stake a claim for regular duty – 2-0, 1.00, .959 and a shutout in his last game, a 6-0, 17-save win over Tampa Bay.

That Ovechkin has five points in two games is not surprising. That all of them are assists is. Ovechkin has two goals in his last 11 games. He also has 14 assists in those 11 games. It is worth noting that the Caps are 7-2-2 in those 11 games (that is a 119-point pace for those of you not wanting to do the math). Known as a prolific shooter, Ovechkin has “only” 39 shots in the last 11 games (ten of them came in the 3-2 win over Carolina on Wednesday). Great players find a way to contribute, and Ovechkin finds himself among the league scoring leaders still by expanding his game. It is also a measure of how much the team has grown up around him that they are finishing the opportunities that led to Ovechkin getting those 14 assists over the last 11 games.

1. Non-Nonchalance. The Caps have the best home record in the league (11-1-1). In fact, if they had not yet played a road game, their 23 home points would still have them ninth in the East and knocking on Atlanta’s door for eighth. The Hurricanes are 1-3-1 on the road so far this month. But Carolina did shut out the Bruins in Boston in their last game on the road and took Pittsburgh to a shootout in the road game before that. The Hurricanes should not be taken lightly.

2. Balance. It has only been two games, but the series so far has been the “Nick and Alex Show.” Backstrom has four of the Caps’ six goals, and Ovechkin has four of the team’s 11 assists. Neither Alexander Semin nor Mike Green have a point yet. It would be nice to see the second or third lines have a multi-goal game.

In the end, the real danger here is that this is a getaway game for the Caps. After this one they head on the road for games in St. Louis and Dallas. If they can keep their heads away from the boarding area, this is a game the Caps should win, even if Cam Ward comes into it having a 2-0-1, 0.68, .977 record in his last three appearances, including a shutout of the Bruins in his last game. The Caps are 9-2-2 this month, 9-0-2 in games in which they actually scored a goal. It suggests that Ward might have to pitch another shutout to have Carolina head out of Washington a winner.