The Peerless Prognosticator is ON THE AIR!!! -- Game 19: Capitals at Avalanche, November 16th

Someday, the Caps will put together a winning streak once more.  They were denied a second straight win on Wednesday night by the Winnipeg Jets in a 3-1 loss in which the score might have been the least consequential outcome.  The Caps went into that game down a goaltender and came out of it down two skaters as well.  And that makes their Friday night meeting in Denver against the Colorado Avalanche just that much more challenging.

Braden Holtby was held out of the game in Winnipeg due to an upper body injury suffered on Wednesday morning.  Evgeny Kuznetsov and T.J. Oshie each sustained possible concussions during the contest with the Jets, reducing the scoring line complement by a third.

Colorado comes into this game having emerged from a funk that saw them lose five straight games (0-4-1) to close October and open November.  Wins in Edmonton over the Oilers and at home against the Boston Bruins pushed the Avs back into fourth place in the Central Division and the group of playoff eligibles in the Western Conference.

The Avs score, a lot.  They lead the league in scoring offense through Wednesday’s games.  It might be the product of having, if not yet the best, then perhaps the hottest first line in the NHL.  Mikko Rantanen, Nathan MacKinnon, and Gabriel Landeskog have combined for 31 of the team’s 65 goals through 18 games.  It would not be entirely correct to call Rantanen the “secret” weapon for the Avs.  He was, after all, the tenth-overall pick of the 2015 entry draft.  And, he did finish last season with 29 goals, his second straight 20-goal season in his second full season in the NHL.  What he has done with aplomb this season is ramp up his assist numbers.  With 22 assists to lead the league, he is well on his way to obliterating the career high of 55 he set last season.  Rantanen is tied for the league lead in multi-point games through Wednesday (eight) and has twice as many games with three or more assists (four) than the closest players to him on that list (which includes the Caps’ Nicklas Backstrom).  If anything, though, he has cooled off.  He opened the season with a nine-game points streak, going 4-12-16, plus-11.  In his last nine games he is 3-10-13, even, but in three of those games he recorded three or more points.  “Cooled off” is a relative term.  Rantanen is 2-4-6, plus-1, in three career games against the Caps.

Nathan MacKinnon is one of those players with whom Rantanen is tied for the league lead in multi-point games.  It would be hard for the six-year pro to top last year’s career highs of 39 goals and 97 points, but with 12 goals and 26 points through 18 games so far this season, he is on a pace to do just that.  His 11 even strength goals lead the league.  As one might expect, being a linemate of Rantanen, his season cleaves into two nine-game pieces as well – 8-7-15, plus-9 in his first nine games (in all of which he had points), and 4-7-11, minus-2 in his last nine games (points in five of those contests).  As it is, MacKinnon is third in the league in goals scored last season and this (51, tied with Connor McDavid and behind David Pastrnak (52) and Alex Ovechkin (61)) and third in points (123, behind Claude Giroux (124) and McDavid (134)).  No player has more game-winning goals in that span (14).

Gabriel Landeskog is, at age 25, the veteran of the top line.  Now in his eighth season with Colorado after being taken second overall in the 20111 entry draft, he is closing in on the top ten on a number of  all-time franchise lists: games played (534/17th), goals (155/11th), assists (206/13th), points (361/12th), power play goals (40/12th), game-winning goals (21/T-14th).  Through just 18 games, his 12 goals is almost half-way to his career high (26 in 2013-2014), and his 20 points is on pace to shatter his career best in that category (65 in 2013-2014).  He has been a bit streakier than his two teammates referenced above.  He has five and four game points streaks so far, but he also has a pair of instances in which he went consecutive games without a point.  That this profile should be the least consistent among the three is indicative of just how dominating they have been in the offensive end of the ice.   In 11 career games against Washington, Landeskog is 5-7-12, even. 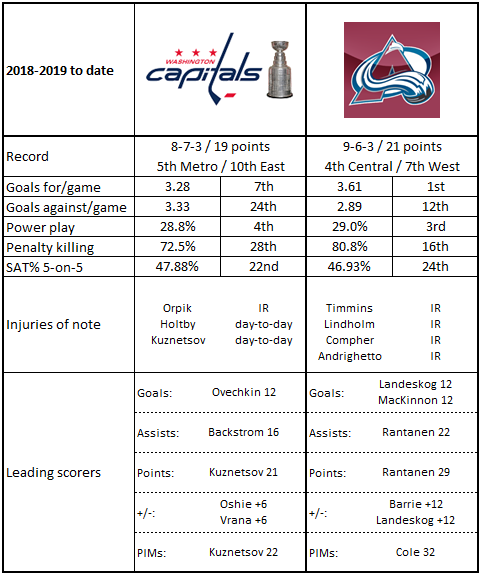 1.  Stop the “MGM” line (guess that’s a Mikko, Gabriel, MacKinnon reference), stop the Avalanche.  MacKinnon and Rantanen each have had four games without a point, and the Avs lost all of them.  Landeskog has been held without a point in five games, and Colorado lost five of them.

2.  If the Avs score on home ice, they win.  In seven home games, they scored four or more goals four times and won all of them.  Three times they scored two or fewer goals and lost all of them.

3.  Colorado is the most efficient offensive team in the league.  Their league-leading scoring offense (3.61 goals per game) comes with the league’s 24th-ranked club in shots per game (29.7), making their 12.6 percent shooting mark tops in the league.

4.  Part of that offensive efficiency is getting shots to net.  The Avalanche have only 180 missed shots so far, the fourth-lowest number in the league.

5.  The Avs resemble the Caps, well, last year’s Caps in one respect.  Their top-ranked scoring offense comes with the 24th-ranked team in shot attempts-for at 5-on-5, suggesting a skills premium that offsets that comparatively low possession indicator.

1.  The Capitals have yet to post a three-game winning streak.  This is the latest they have gone into a season without doing so since 2006-2007, when they did not post a streak of three or more wins in a row until going on a four-game winning streak in Games 24-27.

3.  Only five teams have spent more time killing penalties than the Caps (110:22), and two of them have played two more games (Anaheim/122:32 and Vancouver/127:27).  The Caps overtime special team time differential (minus-3:26) is worst in the league, largely owing to the fact that they have not had an overtime power play yet.

4.  The road has not been kind to the Caps.  Their three wins in eight road games is tied for the fifth lowest win total in the league.

5.  The Caps have dressed 23 skaters this season.  Of that number, 22 have recorded points.  Jonas Siegenthaler…you’re up.

Goaltending for the Avalanche has been night and day between the two former Capitals netminders.  On the one hand, there is Semyon Varlamov, now in his eighth season in Colorado.  In 13 games he has an unremarkable 6-5-2 record, but his goals against average (2.32) and save percentage (.926), ranking ninth and 12th, respectively, among the 48 goalies with at least 300 minutes.  What he has been is streaky in the extreme.  He opened the season with points earned in his first six decisions (4-0-2) with a 1.64 GAA and .953 save percentage.  Then, he lost five straight decisions with a 4.85 GAA and .889 save percentage.  He bounced back with wins in his last two games, stopping 46 of 50 shots faced.  Varlamov is 3-4-0, 2.31, .937 in seven career appearances against the Caps.

On the other hand, there is Philipp Grubauer, who has struggled in five games with a 3.56 goals against average and a .893 save percentage.  Slow starts are no stranger to Grubauer, though.  Recall that in each of his first eight appearances last season, the Caps lost, and he got the decision in six of those games (0-5-1) and had poor GAA/save percentage numbers (3.86/.876).  The problem is a low population of games played, skewed by his last appearance in which he allowed seven goals on 37 shots in a 7-6 overtime loss to the Vancouver Canucks on November 2nd.  If he gets the nod, it would be his first career game against Washington.

When Dmitry Orlov potted a pair of goals in the Caps’ 5-2 win over the Minnesota Wild on Tuesday, it was his first two-goal game since January 23, 2017, in a 6-1 win over the Carolina Hurricanes and the first time he did it on the road in his career.  He added an assist for his first multi-point game of the season and his first three-point game since he had a goal and two assists in a 7-3 win over the New York Islanders last March 15th.  With injuries over the past week to John Carlson (since returned), Evgeny Kuznetsov, and T.J. Oshie, the Caps will be looking for offense from any place they can get it.  After posting consecutive 30-plus point seasons the last two years coming into this season, Orlov is one of those players that needs to shake off the slow start he had (two points in his first 16 games, both of them assists) and provide consistent support from the blue line.  Orlov is 1-2-3, plus-4, in seven career games against Colorado.

Speed teams do give the Caps trouble, and with the possibility that Evgeny Kuznetsov and T.J. Oshie, and their combined 15 goals, will be out of the lineup, the challenge will be to make this game a slog, to slow things down, to impose their veteran will on the upstart, frisky Avalanche.  Colorado dispatched Edmonton and Boston by three-goal margins in their last two games, but this is a team with three three-goal losses on its record, too.  It makes one wonder which Avalanche team will show up.  If they come prepared for a track meet, it could be a long night for the Caps, especially if goalie Braden Holtby remains out of the lineup.  With everything stacked against them, plus playing their third game in four nights, slow and sure wins this race.