The Peerless Prognosticator is ON THE AIR!!! -- Game 20: Capitals at Flyers, November 13th

The Washington Capitals renew one of their longest and most bitter rivalries on Wednesday night when they visit Philadelphia to take on the Flyers at Wells Fargo Center.  The Caps, despite seeing their six-game winning streak snapped in a 4-3 Gimmick loss to the Arizona Coyotes, go into this game with points in 12 straight contests (10-0-2).  The Flyers will host the Caps carrying a three-game winning streak, all of the wins earned in extra time, and five wins in their last six games, four of the wins coming in the post-regulation phase, three of them in trick shot competitions.

This will be the 220th regular season meeting in the all-time series between these clubs.  Washington has an 86-103-11 (19 ties) record against the Flyers, 37-62-7 (six ties) in games played in Philadelphia.  The Caps have a more successful recent history against the Flyers, going 29-16-11 overall since 2005-2006 and 13-9-7 in games played in South Philly.  The Caps swept last season’s four-game series, beating the Flyers by 5-3 and 3-1 margins in Washington, while posting 5-3 and 5-2 wins in Philadelphia.  This will be the first of four games between the teams this season. 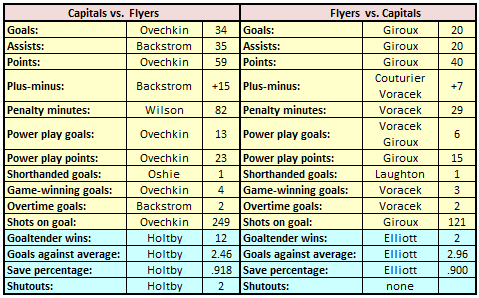 Claude Giroux featured prominently in the scrapbook of Philadelphia Flyer achievements.  Only Bobby Clarke played in more seasons with the club (15) than Giroux, now in his 13th season in orange and black.  He is third in games played (837), tenth in goals (240), second in assists (534), fourth in points (774), tied for 11th in power play goals (74, with Mark Recchi), and is tied for ninth in game-winning goals (39, also with Recchi).  At one point in his career, he was spoken of as the best player in the sport.  Truth be told, Giroux might have had that moment in the spotlight in 2012, but he has been more a reliable, consistent producer than the electric, high-wattage sort of a Sidney Crosby, Alex Ovechkin, or Connor McDavid.  That characterization does not diminish Giroux’ achievements.  Since he became a full-time player for the Flyers in 2009-2010, Giroux is fourth among all players in games played (793), 28th in goals (231), third in assists (516), and fourth in points (747).  What is more, he might have sacrificed sheer numbers in moving from center to a winger spot for much of his recent history.

If Claude Giroux is at one end of the experience spectrum, Joel Farabee is at the other.  When he made his NHL debut on October 21st against the Vegas Golden Knights, he became the youngest skater to dress for the Flyers this season at age 19.  After being taken 14th overall in the 2018 Entry Draft, Farabee spent a season with the Boston University Terriers in the NCAA’s Hockey East conference.  After one year in Boston, he started this season with the Lehigh Valley Phantoms in the AHL and made it hard to keep him down on the farm with three goals in four games.  Farabee slid into a spot on the left side of the forward lines comfortably so far with two goals and two assists in 11 games while averaging almost 16 minutes per game in ice time.  Whether a product of his being placed in the lineup or merely coincidence, the Flyers were 2-3-1 before he got a sweater, 8-2-1 since he won a spot in the lineup.  He comes into this game having alternated games with points over his last six games (2-1-3, even) and will be making his first appearance against the Caps.

The goalie starts have been relatively evenly split between Carter Hart and Brian Elliott – ten for the former and seven for the latter – but it is about time to call it Hart’s crease for the Flyers.  The goaltending position for the Flyers has been one of the most difficult jobs in the NHL to fill consistently, let alone well, for decades.  Since Ron Hextall hung up his pads and skates after the 1998-1999 season, the Flyers employed 28 goalies…until Hart made it 29 last season.  Only Steve Mason among the 28 preceding Hart dressed for more than 200 games.  Mason was the only one with at least 100 wins.  How frustrating has it been?  Of the 29 goalies to dress for the Flyers since Hextall, Hart is already 13th in wins (22) and games played (42).  His save percentage (.912) is fifth among that group.  He struggled in the early going this season (2-3-1, 3.32, .864 with one no-decision in his first seven games), but he is on a roll of late, going 4-0-0, 1.92, .929 over his last four appearances.  Hart allowed four goals on 31 shots in a 5-2 loss to the Caps last March 14th in what is his only appearance to date against Washington. 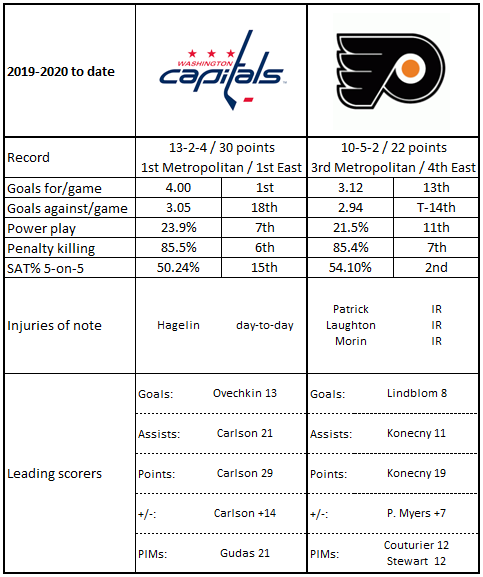 2.  Philadelphia’s power play against the Caps has lacked wattage.  In the last 12 meetings of the clubs since December 2016, the Flyers are 2-for-38 with the man advantage (5.3 percent).

3.  Through Monday’s games, the Flyers were tied with the Los Angeles Kings for largest positive shots on goal differential (plus-5.7).

5.  Keeping shots down might be important against the Flyers, or at least staying ahead of them in that category.  Through Monday’s games, the Flyers are tied with four other teams for most wins when out-shooting opponents (seven).  Philadelphia has only three wins when out-shot (only six teams have fewer wins).

1.  This will be the 220th time that the Caps faced the Flyers, breaking a tie with the New Jersey Devils for third-most games played against an opponent in the regular season.  The Caps have played 223 games against the New York Rangers and 225 games against the Pittsburgh Penguins.

2.  The Caps have a four-game winning streak against the Flyers.  It is the Caps’ longest winning streak against Philadelphia since they won four in a row from October 2009 to November 2010.  The last time that the Caps beat the Flyers in five straight was a five-game streak from February 1991 to December 1991.  With a win, the Caps would tie that streak for longest ever against Philadelphia.

Players often go through stages in their professional careers – rookie, developing prospect, contributor, cornerstone, mentor, graybeard, final curtain.  Consider Matt Niskanen.  A 28th-overall draft pick of the Dallas Stars in 2005, he joined the Stars in 2007-2008 and was third in his rookie defenseman class in goals (seven) and fourth in points (26).  He finished eighth in Calder Trophy voting for top rookie.  He improved in his sophomore season (6-29-35), but after a drop off to start his third season he was shipped to the Pittsburgh Penguins.  He started slowly there, but circumstances led to his moving from a prospect to taking on a bigger role – a cornerstone role on the Penguins’ power play – in his fourth season there (10-36-46 with 15 power play points).  That was his contract year, and he signed a multi-year deal with the Caps with an eye toward his assuming an important role on a contender.  In his first four seasons with the Caps, he was precisely that, posting 131 points in 310 games, playing frequently as a top-pair defenseman, culminating in a Stanley Cup in 2018.

But last season, Niskanen’s production fell a bit, and his reliability in the defensive end was diminished.  At age 32, it might have been a signal of another change in the stages of his career.  The Caps might have thought along the same lines and traded him to the Flyers for Radko Gudas.  With his new club, Niskanen is the oldest blueliner to dress this season and might be thought of as taking on a mentoring role with young blueliners like Ivan Provorov and Travis Sandheim.  If he is not a cornerstone on the Flyers’ defense, he is not out of his productive phase, currently second among defensemen in goals (two) and points (eight).  While he is not getting the ice time he did early with the Caps (22:59 per game over his first four years), his 21:27 per game this season is in line with what he logged last year with the Caps (21:56).  Niskanen started fast with his new team, posting points in three of his first four games (1-2-3).  He then went 1-4-5 over his next ten contests, and he comes into this game without a point in three straight, his longest streak this season without a point.  Niskanen is 1-5-6, plus-8, in 12 career games against Washington.

His development from “Terrible Tom” to “Top Line Tom” might be complete this season.  Through 19 games, he has eight goals (0.42 per game) and only 18 penalty minutes (0.95 per game).  And along with the improvements in goal scoring, he seems to be developing a skill in setting up others.  He has eight assists in 19 games so far, more than a third of the way to a career high (21 in 78 games in 2017-2018).  The only thing that seems able to stop Wilson from continuing his improvements in production is his ornery nature.  When he was suspended for 20 games for an illegal check to the head of St. Louis Oskar Sundqvist in a pre-season game last season, the league noted that it was Wilson’s fourth suspension in a span of 105 games.  Through 19 games this season, Wilson has nine minor penalties (no majors).  His reputation of being a one-dimensional (what others call “dirty”) player will be hard to scrub away, as it can be for young players who come into the league breathing fire, but he has been doing a fine job of it so far this season.

Games in Philadelphia between these teams have not lacked for offensive fireworks recently.  In each of the last four games played at Wells Fargo Center, the winning team scored five or more goals, the Caps and Flyers splitting the four decisions, two apiece.  And, the games have not been close, either.  The last five decisions were of a multi-goal variety, four of them by three or more goals.  Five of the last six Capitals wins, dating back to October 2011, have been by three or more goals, the sixth by two goals.  We are thinking that run of fun is going to end with this game between two long and bitter rivals.