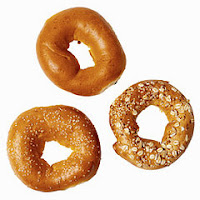 Well, they played them even at even strength.

Unfortunately for the Washington Capitals, there is also the matter of special teams play in the sport of hockey, and they lost that battle – and last night’s game – to the Carolina Hurricanes, 3-0, in Raleigh.

Two power play goals allowed; a shorthanded goal allowed, and only 23 of their own shots on goal. When added to the fact that they lost their 14th game in 22 tries on the road, the Caps had on display all the things that could keep them out of the playoffs. It had the added ingredients of sloppy play in their own end with the puck (John Carlson getting picked by Eric Staal leading to Jussi Jokinen’s shorthanded goal) and a propensity for allowing goals in the last minute of periods (twice, once in the second period and once in the third period).

You could call this a team effort in suckitude.

-- What is happening to John Carlson? It is hard to look at one play and paint a complete picture of a player from it, but that giveaway (actually scored as a takeaway by Eric Staal, but still) can’t happen there. It had all the look of simply not paying attention, of being too lackadaisical with the puck, expecting that no one would challenge him. That’s “January” thinking, not “playoff” thinking. Think a player can just flip a switch from one to the other?

-- OK, you could say that on the second Jokinen goal that there was some “puck luck” involved, the puck hitting a stick and falling – figuratively – into Jokinen’s lap for a wide open look at an open net. That would be one way to look at it. Here is another way…

Tim Brent throws the puck from the side wall to the middle toward teammate Jay Harrison. The Caps’ Mike Knuble tries to intervene from the other side, but cannot get to the puck before Harrison receives the pass... 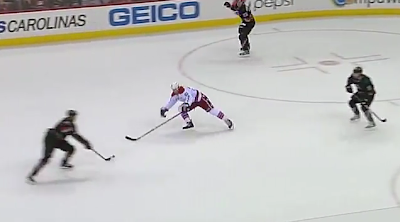 Harrison steps around Knuble and steps into open space as Jason Chimera skates past. Harrison now has a clear path forward to the net, two Caps behind the play...on a penalty kill...

Dmitry Orlov leaves his man to try and disrupt a shooting attempt. Harrison has open space and shoots, Jokinen going to the net behind Karl Alzner...

The puck hits Orlov’s stick and is deflected into the air, but Jokinen is now the only player in a position to react to that event, as he is at the top of the crease, only Alzner within ten feet of him and on the wrong side of the play as it is unfolding... 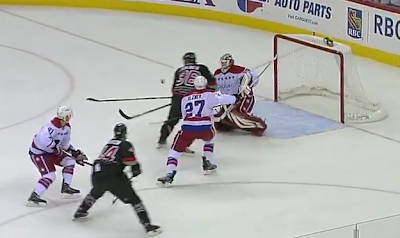 Alzner cannot get to Jokinen as Vokoun tries to scramble into position after the deflection, but Jokinen now has the puck on his stick. This play can end only one way. If you looked at the last couple of seconds of it you might conclude it was misfortune, a deflection off a stick that led to a loose puck. But the Caps appeared to put themselves in a poor position to defend against such an occurrence by all that happened before those last moments... 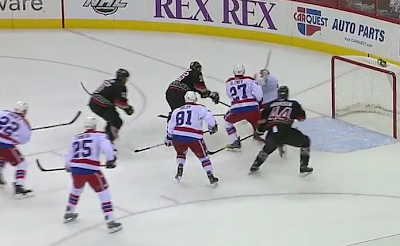 -- Odd statistic… there were 14 offensive zone faceoffs. Marcus Johansson took seven of them, not unexpected (or undesired) since he was centering Alex Ovechkin and Troy Brouwer on the first line. But he won just two of them.

-- Three power plays, one shot, that coming from a defenseman. Carolina had three shots while shorthanded. Six minutes of “ugh.”

-- The Caps and the Hurricanes were relatively close in even-strength shots on goal (26-22, Carolina). Carolina outshot the Caps on special teams, 7-1.

In the end, it is said that goaltending is the most important ingredient in winning a championship. That is true in large part because a championship team has to have solid goaltending all the time and the capacity for that goaltending to steal a game here and there. The Caps have had that kind of goaltending lately, at least the solid part. Last night, Tomas Vokoun stopped 30 of 33 shots, and it would be hard to fault him much on any of the three Carolina goals. In fact, Caps’ goalies combined have allowed more than three goals in a game only three times in the last 17 games and have played to a combined save percentage of .933 since a 5-1 loss to Philadelphia on December 13th. And this level of goaltending is coming despite the Caps averaging only 22.8 shots per game since that loss to the Flyers.

One can talk schemes and coaches and stats all one wants. But at some point it boils down to a simple case of heart and pride, and that’s on the players. In January the Caps are averaging 1.89 goals per game. They are getting little from their skaters, spiraling into a situation in the last three games in which if their goaltenders don’t pitch a shutout, they don’t win.

That the Caps are still leading the Southeast Division is something of a marvel, and it makes one wonder if the winner of this division won’t finish the season with fewer standings points than the eighth place finisher in the Eastern Conference.

It’s a good thing that the Southeast Division this season really is turning into the “Southleast” Division.
Posted by The Peerless at 8:16 AM No comments: