Plus-minus is the Devil's spawn of statistics. Still... 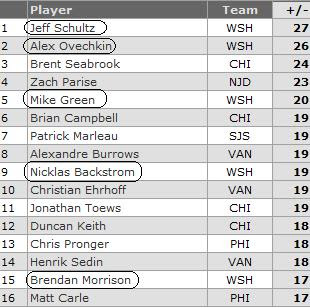 And while we're at it, from the Man-Bites-Dog file... 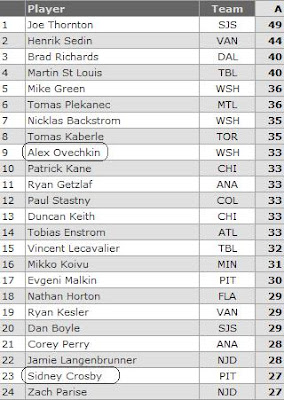 What does a person have to do to get a star, eh? Two goals not good enough for these guys?
Posted by The Peerless at 11:15 AM 2 comments:

So, you’re a coach of a struggling team. You come into town to face an offensive juggernaut. What is the one thing you want to burn into the brains of your players as they take the ice?

DON’T GIVE UP A GOAL IN THE FIRST MINUTE!

Unfortunately for the Toronto Maple Leafs, such advice was either not given or not heeded as Alex Ovechkin took a feed from Nicklas Backstrom and deposited it in the back of the net at the 49-second mark of the first period. Before the night was over, Ovechkin would provide a helper on four other Capital goals, and Jose Theodore would turn away 28 of 29 shots on the way to a 6-1 win over the Leafs at Verizon Center.

-- We’re late with this because Kanoobie kept us up all night yapping and watching the replay, spinning like a top each time Mike Knuble batted a loose puck lying in the crease into the back of the net. There was Knuble working a give and go with Ovechkin early in the second for a goal from the blue paint. Then it was Knuble finishing off a Backstrom to Ovechkin to Semin to Ovechkin tic-tac-toe from point blank range. Officially, the goals were tallied from a total of 16 feet. More like 16 inches.

- The second Knuble goal came as a result of – STOP THE PRESSES!! – a fine defensive play by Alex Ovechkin when, after shanking a shot, he had to play the role of defenseman as Alexei Ponikarovsky picked up the puck and skated down one-on-one on Ovechkin. The Cap angled Ponikarovsky away, stole the puck, and hotfooted it the other way to set up the scoring play.

- Knuble might be hitting his stride. That was his third two-goal game this year, but his second in four games.

- Niklas Hagman had ten shots on goal for the Leafs. No Cap had more attempts (Mike Green had ten shot attempts).

- John Carlson was a late call up for this game, and he acquitted himself quite well. 14 minutes, two shots on goal (seven attempts, one of which hit the post), one hit, and a plus-two.

- In a game that saw the Caps score six goals, the game might have been won by Jose Theodore. Even though Ovechkin got the Caps rolling with that goal in the first minute, Toronto came back to dominate for long stretches of the first period. Theodore turned away all 14 shots he faced in the period to allow the Caps to skate off with a 2-0 lead at the first intermission.

- It was as Brooks Laich described it in the pregame – if the Caps could get a two goal or three goal lead, maybe the Leafs start to get tired or feel sorry for themselves about their schedule (they played the previous night). Well, after those 14 shots in the first, the Leafs could manage only a total of 15 for the remaining two periods.

- Jason Chimera almost had his second consecutive game with a Gordie Howe Hat Trick. He had an assist and a fight, but didn’t find the back of the net with his two shots on goal. So far, Chimera is as advertised – fast on his skates, able to chip in the occasional goal, feisty.

- Watching the Toronto power play is kinda painful. Everyone seems to receive the puck backing away from the goal, and the whole exercise seems to be one of trying to feed Tomas Kaberle at the point. Yes, it did work once (in six tries), but it doesn’t look to be something that will have a lot of long-term effectiveness.

- Nice how Eric Fehr “Knuble-ized” the puck on his goal, redirecting a change-of-pace shot from Ovechkin (who broke his stick).

- And how about Fleischman doing the redirect mambo on another shot by Ovechkin… sticks on the ice boys.

- If Tom Poti could score a goal every time he gets flattened like that, think he’ll take it?

- If Toronto had made the game a bit closer, think Ovechkin would have set a personal high for points? He skated only five shifts in the third period and only 17:50 for the game.

- Where does David Steckel earn his money? In the faceoff circle in his own zone; he was six-for-eight there.

- Two fights, one Cap (Chimera) tossed, a goalie interference penalty when Jason Bake rammed through the crease and toppled onto Theodore, 54 minutes of penalties in the last six minutes, and the refs bagged the last two seconds rather than risk a faceoff. Almost a shame these two teams don’t meet again this year.

- That makes six straight games in which the Caps have scored at least four goals (31 in all). They are 5-1-0 in those games.

It wasn’t as purely a dominating effort as was the 8-1 win over Atlanta a week ago, more like a relentless squeezing of the life out of the Maple Leafs. Toronto deserves credit for working hard, but they just don’t have the assets to finish a lot of what they spend so much time working to get. There aren’t any finishers there (and for the moment, that includes Phil Kessel). The Caps, on the other hand, are finishing what they start in spades 31 goals on 215 shots in their last six games (that’s a .856 save percentage for opposing goaltenders).

It makes for an interesting week ahead as the Caps now host Philadelphia on Sunday and Detroit on Tuesday before heading to Pittsburgh on Thursday before a date with Phoenix at Verizon Center on Saturday. But right now, Caps fans couldn’t ask for their team to be in a better situation than they are in right now heading into that week.
Posted by The Peerless at 10:23 AM No comments: