Theme: “We love to expect, and when expectation is either disappointed or gratified, we want to be again expecting.”
-- Samuel Johnson

“I’d rather have someone that gets 10-15 [goals] in the regular season but delivers in the playoffs than someone who gets 25 and doesn’t.”

When Washington Capitals General Manager George McPhee uttered those words upon signing unrestricted free agent Joel Ward to a four-year, $12 million contract last summer, he might have been speaking for a whole legion of Caps fans who were aching for just such a player to help deliver them from the wilderness of playoff despair to a Stanley Cup. Or at least something other than the perennial early exit from the playoffs.

No pressure, eh? It might have been a lot to heap on a player who, despite being 31 years of age had played in the equivalent of just less than three-full regular seasons worth of games in the NHL (241). But the regular season really was not the object of the exercise with signing Ward. Sure, he had a reputation as a hard-working, do the little things kind of player who could contribute as a third-liner, and even chip in some power play goals (11 over his previous three seasons).

What the Caps, and no doubt Caps fans, saw was the fact that in 18 playoff games in his career with the Nashville Predators he had nine goals. Anything Ward might contribute in the regular season would be accepted with thanks, but one had to think it was with the spring in mind that he was signed, to provide the Caps with that elusive “something” they seem to lack every season when the flowers bloom.

Things started rosy enough for Ward in the regular season portion of the year. Partnered with Brooks Laich and Jason Chimera in what was called in some circles the “Meat and Potatoes” line, Ward contributed a 4-3-7, plus-6 scoring line in his first 12 games. Four…twelve…nice symmetry with that whole contract thing. And that was a 27-goal pace with which he was starting the season. Certainly he would halt his own personal slide in regular season goal scoring that say his total drop from 17 in the 2008-2009 season to 13 in 2009-2010 and to 10 last season in Nashville.

Things did not turn out that way. After potting a goal against the New York Islanders on November 5th in a 5-3 Caps loss, Ward would go the next 25 games without a goal before he would notch one against San Jose on January 7th. Then another 21 games without a goal before finding the back of the net against Montreal on February 24th. Meanwhile, over these 48 games Ward would see his ice time cut from the mid teens to single digits. From January 22nd through March 10th – a span of 22 games – he has as much as ten minutes of ice time only eight times. After that stretch he would be scratched in eight of the last 14 games of the regular season.

In all, after his promising 4-3-7, plus-6 start in his first dozen games, Ward was 2-9-11, plus-6 in his last 61 contests. The general problem was what might have been a Catch-22. Player goes into slump, gets ice time cut, gets fewer offensive opportunities on what is an energy (not a scoring) line, can’t demonstrate merits of moving back to a third line slot, gets stuck in low-ice time/poor offensive potential situations. And that was manifest in Ward’s shot totals. He has not been what you would call a “high-efficiency” shooter. He’s more the whach-the-rock-‘til-it-cracks” sort. His shooting percentage in Nashville declined over his three years there, from 12.8 to 9.7 to 6.4 percent. But he never had fewer than 130 shots on goal. This season Ward’s shooting percentage actually pick up a bit (7.6 percent), but he had only 79 shots on goal in 73 games. Three of the Caps’ defensemen playing in at least 50 games had more shots on goal per game.

Oddly enough, his underlying numbers probably outpaced his summary numbers, a function of his defensive work. His PDO value of 1027 was second among Capital forwards skating at 5-on-5 and playing in at least 20 games. That was a product of his on-ice save percentage being best among those forwards, and by a significant margin (.944 to Jay Beagle’s .937). One might have thought that as a fourth-liner, this number would be mitigated by the fact that he would not have been expected to face top-notch offensive talent. Still, his quality of competition ranked a respectable fifth among Caps forwards. Put another way, he was on ice for only 25 goals against in 73 games, by far best among forwards playing in more than half the Caps’ games this season (Mathieu Perreault was second with 31 goals against on ice in 64 games). Here is how his numbers compare with those he recorded in Nashville last season: 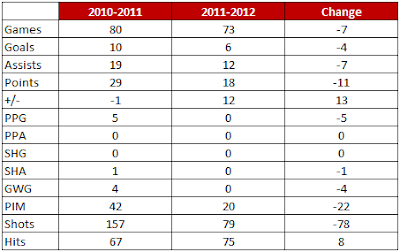 Odd Ward Fact… Despite going 11-2-13 on the power play in 230 games with Nashville over three seasons, Ward did not register so much as a power play point with the Caps this season and had a total of 10:26 of power play ice time for the season.

Game to Remember… October 21, 2011. The Caps were on a roll, having won their first five games of the season, but on this night would go into a difficult place from which to emerge with the streak intact – Philadelphia. And the Flyers were off to a fine start of their own, winning four of their first five games (losing only to the Los Angeles Kings in overtime) and coming off a 7-2 drubbing of Ottawa. The Flyers drew first blood on a goal by Claude Giroux late in the first period, but before the horn would sound for the first intermission, Mathieu Perreault and Alex Ovechkin would score to give the Caps a lead. The Caps iced the game in the second period when Roman Hamrlik and Ovechkin scored 1:31 apart early in the frame. Then, if the Flyers had any lingering ideas of a comeback, Joel Ward redirected a drive from Jeff Schultz past goalie Ilya Bryzgalov with defenseman Kimmo Timonen draped all over him to notch his first goal as a Capital.

Game to Forget… February 1, 2012. Things were not going well for the Caps, who were 2-3-1 to close the month of January, nor for Joel Ward, who had one goal in his previous 36 games as he and the Caps prepared to visit the Florida Panthers. Neither the Caps nor Ward could climb out of their fog. The Caps fell behind early and never threatened, and Ward would be limited to 13 shifts – four of his last six lasting less than 15 seconds – in a 4-2 loss to the Panthers. Ward finished the night with no shot attempts, a hit, and a blocked shot for his 6:18 of effort, his lowest ice time total since he skated 5:52 as a rookie with the Minnesota Wild in a 4-2 win over the Edmonton Oilers on January 12, 2007.

Post Season… Dale Hunter, Joe Juneau, and Joel Ward. These are the only three players in franchise history to clinch a playoff series with an overtime goal. Hunter was the first to do so in a Game 7, and Ward was the second…

In the end… Did Joel Ward have a good season? No, certainly not what was expected, at least from the offensive side of the ledger. Was he used in a manner consistent with the situations in which he was successful in Nashville (for instance, power play time)? No. But one should not overlook the fact that he had a pretty good year on the defensive side of the ledger, and there is that whole overtime goal thing. As infrequently as the Caps have had such things to celebrate – or even playoff series wins to celebrate – Ward gets high marks for making his mark in Capitals history.