The Peerless Prognosticator is ON THE AIR!!! -- Game 29: Capitals at Penguins, March 19th

Well, here we are, half-way through March, and we are getting right down to the nub of it.  That time of year when the games really matter, when every scrap of information you can get about the opponent is put to advantage, where the competition is fierce, the stakes are high, and the attitudes ruthless.

Oh, you thought we meant the stretch run of the NHL season?  Well, while you are mulling over whether to pick Middle Tennessee State or Saint Mary’s in the play-in game tonight, or whether Duke or Louisville will come out of the Midwest, let’s take a break for a moment and look at the matchup between the Washington Capitals and the Pittsburgh Penguins at Consol Energy Center in Pittsburgh.

It might be best if we do this in terms you understand… We have the heavily favored one-seed Penguins out of the Big Atlantic Conference… uh, Division… hosting the 13-seed Capitals out of the mid-major Big Southeast Conference.. sorry, Division.  And talk about your “March Madness.”  The Penguins have yet to lose in the month of March, coming into this game on a nine-game winning streak, having outscored their opponents by a 37-22 margin.  They have won with offense (the first five games of the streak scoring at least four goals), and they have won with defense and goaltending (holding opponents to two or fewer goals in each of their last five games).

And boy, have they spread things around.  Thirteen different Penguins have goals in this nine-game winning streak, and 19 different Penguins have points.  As you might expect, Sidney Crosby leads the team in point scoring on this streak, going 4-13-17.  But right behind him is Chris Kunitz (9-7-16), who leads the Penguins in goals over this streak.  Meanwhile, there is defenseman Kris Letang with 13 points, all of them assists.

But it is not just the name players doing it for the Penguins, and that might be the key to the streak.  Brandon Sutter has four goals in the streak, two of them game-winners.  And they are not just “game-winners” in the sense he got a second goal in a 7-1 win.  He scored an overtime goal in a 7-6 win over Montreal on March 2nd to start the streak, then he potted the tie-breaking goal with 2:03 left in a 3-2 win over Boston on March 12th.

Someone named “Beau Bennett” is 1-4-5 over the nine games, and this is a player who spent 35 games in Wilkes-Barre/Scranton in the AHL (7-18-25) before being called to Pittsburgh on February 14th.  Defensemen not named “Letang” have contributed a goal and nine assists.

The thing is that teams have played the Penguins relatively even over the first 40 minutes of games.  The Pens outscored opponents in the first period by an aggregate 12-9 margin, and they split 18 second period goals evenly with opponents.  But the Penguins have owned the third period.  In the last 20 minutes they outscored opponents, 15-4, and they have an overtime goal in addition to that.  Three times in the streak the Penguins scored three goals in the third period to erase leads held by opponents.  This is a team that has been mauling opponents.  The only question at the moment is, are they peaking six weeks too early?

Here is how the Caps and Pens compare in their overall numbers: 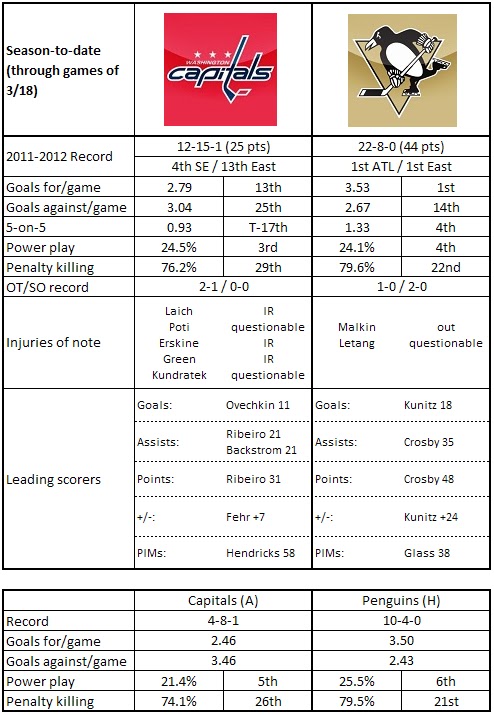 1.  Pittsburgh leads the league in third period goals, as you might expect from the results of their nine-game winning streak. But, they also lead the league in first period goals.  They have outscored opponents, 36-19 in the first period of games and by a 40-23 margin in the last 20 minutes of games.  That they have been outscored, 38-29, in second period over 30 games is something to watch for in this game.

2.  The last two losses for the Penguins came against Southeast Division teams, consecutive losses to Florida and Carolina on February 26th and 28th.  The Penguins have not lost at home since February 20th, a 6-5 loss to Philadelphia.  They are 7-0-0 at home since then.

4.  The Penguins have six one-goal wins on their current nine-game winning streak.  That fuels a league best winning percentage in one-goal games (.889 on a record of 8-1-0).

5.  No team has scored more first goals of the game than have the Penguins.  Pittsburgh is 16-5-0 when scoring first.

1.  The Caps have been out-shot in 21 of 28 games this season.  Unfortunate, because in the seven games they out-shot their opponents, they are 4-3-0.

2.  The Capitals are the only team in the NHL to have spent no ice time skating on a 4-on-3 power play so far this season.

3.  Only seven teams have scored the game’s first goal more often than Washington (8-7-0).  Unfortunately, 20 teams have won more games when scoring first than have the Caps.

4.  If Dmitry Orlov dresses against the Penguins on Tuesday (he was recalled from Hershey on Monday), he will be the 11th defenseman to dress for the Caps this season, matching last season’s total in 82 games.

For ten seasons, Pascal Dupuis toiled in relative anomymity, a serviceable winger on several teams – Minnesota, the Rangers, Atlanta, and even in his first few years in Pittsburgh.  He had one 20-goal season in those ten years and was primarily one of those guys relied upon for the occasional “secondary scoring.”  Then last year, he had 25 goals – fourth on the club and a career high.  One might have thought that to be his career zenith.  But here he is, 30 games into the season with 14 goals, a 38-goal pace over 82 games.  Not bad for the “other guy” going in the Marian Hossa trade to Pittsburgh in February 2008.  Dupuis has seven goals in the nine-game Penguin winning streak, but he is only 3-4-7, minus-9, in 30 career games against the Caps.

What last we met Dmitry Orlov, he was skating on Verizon Center ice for the Hershey Bears in the “AHL Showcase” on December 6th  He lasted one period in the 2-1 Hershey win, the victim of what might (or might not...you know how the NHL is on such things) have been a concussion sustained in the first frame.  He returned to action on March 9th and has played in four games at Hershey since being cleared for action.  He was recalled to the Caps on Monday, and his offense from the blue line is sorely needed, given Mike Green’s continued absence.  He was fourth among rookie defensemen in points last season and second in assists (3-19-22 overall).  His next point against Pittsburgh will be his first, though.  He is 0-0-0, minus-1, in three career games against the Penguins.

1.  Contact.  Pittsburgh scores goals in bunches.  The Caps need to maintain contact.  Falling behind by two against this team might end up opening the flood gates as the Caps start taking more chances on offense and creating openings for the Pens.  The Caps need to shorten the game by keeping things close.

3.  Make work.  In 21 appearances this season, goalie Marc-Andre Fleury has faced more than 30 shots in a game only twice, none in his last 10 appearances.  The Penguins cannot unleash their formidable offense if Fleury is having to make saves.  And truth be told, Fleury is having a rather pedestrian season.  His .913 save percentage ranks 27th among 45 ranked goaltenders.  An impregnable wall, he ain’t.

In the end, one would have to think – on paper – that this is one of those “three-or-more” decisions for the Penguins.  After all, Pittsburgh already has two three-goal decisions over the Caps this season, and they came when the Penguins were not playing as well as they are right now.  But all good things come to an end, even winning streaks.  And remember, those two Pittsburgh wins came when the Caps were getting off to that awful 2-8-1 start (the last game in that run was a 5-2 loss to the Penguins).  The Caps are better than they were then, maybe just good enough to steal a win here.