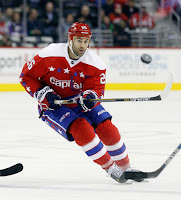 “Sure I am of this, that you have only to endure to conquer.”
-- Winston Churchill

Getting a phone call late at night can be a harrowing event, whether good news or bad news comes with it.  When Daniel Winnik got that call last February, the timing might have been unique, but the nature of the call was not.  It was news of a trade, one that would send him and a fifth round draft pick from the Toronto Maple Leafs to the Washington Capitals for long-time Capital Brooks Laich, defenseman Connor Carrick, and a second round draft pick.

For Winnik, it would be his seventh NHL organization since he was a ninth-round draft pick of the Phoenix Coyotes in 2004.  In his ninth NHL season, Winnik brought 625 games of NHL experience to replace the 742 games that Laich had with the Capitals over 12 seasons.  In none of his previous eight seasons had Winnik recorded as many as a dozen goals, and only once – in 2014-2015 for two teams – did he finish a season with more than 30 points.  If you are looking at his record by team, Winnik did not record as many as 20 goals for any of the previous six teams for which he played, and only once – with the Coyotes – did he record as many as 50 points (52 in 202 games).  One could respect Winnik carving out such a long career out of being a ninth round draft pick (a surprisingly fertile ninth round as these things go) , but it was reasonable to keep expectations to a minimum.

If one was expecting that he would carry over his production displayed with the Maple Leafs in 2015-2016, their foresight would be rewarded.  Winnik finished 2-3-5 in 20 games with the Caps after going 4-19-14 in 56 games with Toronto, leaving him with the same points per game record with both clubs in 2015-2016 (0.25).  You could say he was a marginal improvement on the principal player he replaced – Brooks Laich.  He had two goals in 20 games to one in 60 for Laich.  There were three assists in 20 games for Winnik to six in 60 for Laich.  But what might have been the biggest plus on Winnik’s side of the ledger is that his contract average annual value is half ($2.25 million) that of Laich ($4.5 million), not to mention the fact that he is almost two years younger.

For a guy who gets little in the way of top-six forward time, he has respectable possession numbers over his career.  Overall, he is 49.99 percent Corsi-for at 5-on-5 over his nine seasons, and he was 54.14 percent in his 20 regular season games with the Caps.  Just about as impressive, his Corsi-for at fives with the score tied was 55.0 percent (numbers from Corsica.hockey).   And, as is often the case regarding role players, his supplemental scoring mattered.  The Caps won all four games in which he recorded at least one point.

Now cuz, you are aware the Caps were only 10-6-4 in the 20 games in which he played?  The weird part of that was the Caps being only 4-3-2 in home games in which he played.  And in games not played against teams from Tennessee, he didn’t have a goal (both of his goals for the Caps came against the Nashville Predators in a 4-1 win on March 18th).  Then there were the playoffs.  No goals, no assists, and now points in 12 games.  He is 0-for-45 in goal-scoring in playoff games, 0-for-56 in shooting over six postseason appearances.

The Big Question… After almost nine seasons in other organizations, can Daniel Winnik find another level of production with the Capitals?

If you look at Daniel Winnik’s production across the teams for which he played, his production looks remarkably similar.  There were the 0.09 goals per game with the Phoenix Coyotes, the 0.10 goals per game with Anaheim, Toronto, and Pittsburgh.  There were the 0.11 goals per game with Colorado.  He had 0.10 goals per game in a limited number of games with the Caps.  At age 31 (he will turn 32 in March), it is reasonable to think that Winnik has a full performance profile that does not indicate much of a likelihood of improvement.  He is not going to turn into a top-six forward.  The best that might be said is that he came to the Caps late last season, joining a club that had a consistency of structure in their roles, and his job was to fit in, in a limited amount of time.  It is not something foreign to him in his career, but it might not ever be an easy task.  Now, as a mature player with a club deep in talent, there is little pressure on Winnik to be much more, if any of an offensive performer than he has been.  He can contribute in other ways (he did receive votes for the Selke Trophy as the league’s top defensive forward in 2014-2015).  Being more of a stopper might be the role that presents itself to him.

It is hard to make a complex case for a fourth liner being a difference maker, but look at what the Pittsburgh Penguins got out of bottom six forwards last postseason on their way to the Stanley Cup.  Tom Kuhnackl, Eric Fehr, Brian Rust, and Matt Cullen combined for 15 goals in 24 games, and six of those goals were game-winners.  It doesn’t hurt to get production down the roster.  Daniel Winnik has actually been a reasonably productive player for one who gets bottom six minutes.  His per-82 game production over his career (8-18-26, plus-4) would certainly be welcome for the Caps, but the Pittsburgh example cited here suggests he has a lot of work to do to make a mark of any sort in the postseason (Winnik is 0-3-3, minus-10, in 45 career playoff games).  Winnik has endured a long journey since coming to the NHL as a ninth-round draft pick in 2004.  If he can do so just a bit more and lift his production a bit more in the biggest games, maybe the Caps can conquer their own demons.

Posted by The Peerless at 9:39 AM No comments:

More than a few Washington Capitals fans might look at Tom Wilson and see a 16th-overall draft choice that is not performing like a 16th-overall draft choice.  He might merit another look.  Looking at his 2012 draft class, Wilson ranks fifth in career games played (231), 16th in goals scored (14), 12th in assists (36), 12th in points (50), tied for 13th in plus-minus (plus-3).  He also happens to have more than three times as many penalty minutes (486) than the second-place player, Winnipeg’s Jacob Trouba (151).

Of more immediate importance, Wilson has improved in each of his three seasons in multiple statistical categories.  Goals have climbed from three in his rookie season to four in his sophomore year to seven last season.  Assists jumped from seven to 13 to 16.  Points rose from 10 to 17 to 23.  Shots on goal went from 63 to 79 to 99, with his shooting percentage going along for the ride, from 4.8 to 5.1 to 7.1.  His time on ice has risen from 7:56 per game in his rookie season to 10:56 in his second season to 12:55 last year.  And a big part of that was the shorthanded ice time Wilson logged.  Whereas in 2014-2015 he recorded a total of 46 shorthanded seconds, he averaged 1:35 a game last season.

However, Wilson displayed more discipline in his third season than in the previous season.  His total minutes were down (from 172 to 163), as were his minutes per game (2.57 to 1.99) and his fighting majors (from 12 to 7).  Not that the exuberance was necessarily a bad thing.  The Caps were 4-1-2 in games in which Wilson had a fighting major and 8-2-3 in games in which he recorded at least five minutes in penalties.

The fighting and the penalty minutes might not have mattered, but the Caps got a glimpse that his ability to contribute supplemental scoring might matter more.  Washington was 7-0-0 in games in which Wilson recorded a goal (extending that streak with wins in a goal-scoring game to eight dating back to the 2014-2015 season) and 19-0-1 in games in which he recorded a point (28-0-3 dating back to the 2014-2015 season).

I wonder if Tom Wilson wasn’t a bit of a bad luck charm last season.  According to the folks at stats.hockeyanalysis.com, Wilson skated at least 100 5-on-5 minutes with six other forwards.  Four of them – Jason Chimera, Brooks Laich, Mike Richards, and Michael Latta – are no longer with the team (Jay Beagle and Marcus Johansson were the others).  And here is the other thing with those six forwards.  Their possession numbers (Corsi-for) were better apart from Wilson than they were with him.

The Big Question… Can Tom Wilson make it four-for-four in improving his performance numbers?

Tom Wilson has improved steadily in his three-year career so far, but the numbers are still modest.  Twelve minute/23 point players are not rare commodities in the NHL.  On the other hand, Wilson will not turn 23 years old until next March.  He is young enough to be given room to grow, but the Caps having T.J. Oshie and Justin Williams on the right side, then going out and getting another right winger in Brett Connolly, might make one wonder about just how much room – or more precisely, time – Wilson might get to improve upon his numbers.  One thing that would help with the time he gets is improve on his possession numbers from last season.  He would seem to have it in him, or at least not be a drag on possession.  He was 52.65 percent Corsi-for at 5-on-5 in 2014-2015 before dropping to 46.55 percent last season (numbers from Corsica.hockey).

Tom Wilson is entering the first year of a two-year/$2 million contract with the Caps.  Among his age and compensation cohort he does not seem to be quite the value of the others in the group (one that might include Marcus Foligno, Riley Sheehan, Calle Jarnkrok, Jason Zucker, Vladislav Namestnikov, and Sven Baertschi in the 22-25 age group and $1.75-2.25 million AAV; numbers from generalfanager.com).  But the Caps have had the luxury of bringing Wilson along slowly as a right winger.  The flip side of that entering this season is that there might be something of a log jam in front of him with T.J. Oshie, Justin Williams, and perhaps Brett Connolly.  It will put a premium on making the most of what might be limited opportunities, or at least opportunities that do not look a lot different from the fourth line work that has dominated his resume to date.

Wilson has managed to improve his numbers without the benefit of getting much of an increase in ice time with more productive personnel.  Last season, for example, he recorded fewer than 50 5-on-5 minutes with each of Alex Ovechkin, Nicklas Backstrom, and Evgeny Kuznetsov, and he had less than two minutes of power play time for the season.  He might have some growth left in him in this role, but his development arc might be getting to that point where the club is going to have to see what he can do with more responsibility.  That could be where the next step in his progress lies.

Posted by The Peerless at 1:16 AM No comments: