The Peerless Prognosticator is ON THE AIR!!! -- Game 38: Capitals at Islanders, January 15th

The Washington Capitals face their second former coach in their “Former Caps Coaches Tour” on Saturday afternoon when the Caps visit Long Island to play the New York Islanders.  Having been hammered by former coach Bruce Cassidy on Tuesday in a 7-3 loss to the Boston Bruins, the Caps will face the only coach ever to take them to the promised land of a Stanley Cup championship.

Or will they?  Trotz and Islander defenseman Ryan Pulock were placed in COVID protocol on Tuesday (Pulock was already in injured reserve and would have missed this game).  Lane Lambert has taken over coaching duties, thus preserving the “former Caps coaches” aspect, expanded to assistant coaches.

Lambert will be taking over a team that did not play a game since New Year’s Day until they faced the New Jersey Devils on Thursday night, a 3-2 win.  The Islanders certainly have not helped their cause on home ice with offense.  In 13 home games they have averaged 2.23 goals per game, 31st in the league in home ice scoring offense.  Only twice have they scored as many as four goals.  Their defense at UBS Arena has kept them in games, their 2.46 goals allowed per game at home ranking ninth in the league.

It might say something about the weak scoring punch among forwards that defenseman Noah Dobson is second on the team in total scoring on home ice (5-3-8 in 12 games at UBS Arena).  Dobson is in his third NHL season after he was taken with the 12th overall pick of the 2018 Entry Draft, the fifth defenseman taken in a defense-heavy first round (14 defensemen in 31 first round picks).  Perhaps it should not be all that surprising, though.  In four years of Canadian junior with Acadie-Bathurst and Rouyn-Noranda, Dobson was 39-108-147, plus-77, in 186 games.  He jumped right from junior to the Islanders in 2019-2020.  He has already matched the 14 points overall that he recorded last season in 46 games, reaching that level in 27 games so far this season.  With more than half a season yet to go for the Isles, Dobson is tied for 17th on the all-time scoring list with Ken Morrow among Islander defensemen with three seasons of experience.  Odd Dobson fact… In 12 home games, he has five goals on 27 shots (18.5 percent shooting, sixth in the league among 192 defensemen appearing in at least ten games); he is 0-for-30 shooting on the road in 15 games.  Dobson is 1-2-3, minus-1, in eight career games against Washington.

Will Long Island be Zdeno Chara’s last stop in his career?  Who knows?  At age 44 (he will turn 45 in March), he is in 24th NHL season, skating perhaps his last season with the franchise where is career began.  Chara was a third-round pick of the Islanders in the 1996 Entry Draft, taken 56th overall. Caps fans might remember that draft as the one where they took Alexandre Volchkov fourth overall, Jaroslav Svejkovsky 17th, and Jan Bulis 43rd.  It was not a great draft for the Caps.  At the time, the Chara pick did not seem all that memorable, either.  He spent his first four NHL seasons with the Islanders, putting together a 6-23-29, minus-61, scoring line in 231 games before he was traded by the Islanders with a first round pick in 2001 and Bill Muckalt to the Ottawa Senators for Alexei Yashin.  Ottawa ended up with the better end of that trade, but it would not be until he signed as a free agent with Boston in July 2006 that his career took off.  In 14 seasons in Boston he appeared in 1,023 games (third among defensemen in franchise history), recorded 148 goals (third), 333 assists (third), 481 points (third), a plus-240 rating (fifth), 1,055 penalty minutes (fourth), 69 power play goals (third), 168 power play points (fifth), 24 game winning goals (third), and averaged 24:29 in ice time per game (third for the club since 1997-1998, when the league started capturing that statistic). 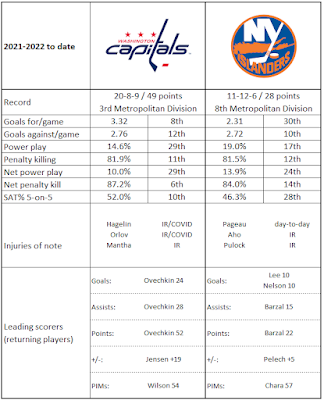 1.  Since losing their first seven games in their new home (0-5-2), the Islanders are undefeated in regulation in their last six home games (5-0-1), all of them on their current seven game home stand.

2.  Speaking of home stand, if the Islanders are going to make anything of their season, it has to happen now.  Over the December 16-February 1 period, the Isles will have played 14 of 15 games on home ice.

3.  Barry Trotz is not generally known as a coach who exposes rookies to heavy workloads.  So far this season, three rookies – Robin Salo, Otto Koivula, and Sebastian Aho – have appeared and combined for 25 games played.  None of the three have yet registered a goal this season.

5.  Only Calgary and Vancouver have fewer first period goals on home ice (seven and six, respectively) than the Islanders (seven in 13 home games).

1.  If the Caps score first, something that has haunted them this season will not likely happen.  In 49 games in New York in which they scored first in the all-time series against the Islanders, the Caps have never lost in extra time (33-15, with one tie).

3.  Washington is 3-0 in the freestyle competition, all-time, in New York.

4.  Only twice in the all-time series between the teams have the Caps faced the Islanders in New York with four or more days since their last game.  The Caps lost both times (0-2-0).

Conor Sheary is in his seventh NHL season, and his 15:48 in ice time is the second most of his career to date.  Not because of his even strength ice time of 12:43, which ranks squarely in the middle (fourth) of his career. It is, in part, a product of shorthanded ice time, which at 31 seconds per game far and away eclipses his previous high (0:02 in 2018-2019 with Buffalo).  No, the main driver of his ice time ranking has been power play ice time.  At 2:33 per game, he is almost a full minute clear of his high coming into this season (1:47 per game in 2016-2017 with Pittsburgh).  Circumstances have forced Sheary into a power play role with the absence of Nicklas Backstrom for most of the season.  It has been difficult in the shuffling of responsibilities that absence created, Sheary going to the baseline left of the goaltender as Evgeny Kuznetsov took over Backstrom’s role running the power play from the right wing wall.  Sheary, who is not the adept passer either Backstrom or Kuznetsov are, has been less able to feed the middle of the 1-3-1 for one-timers from Tom Wilson or T.J. Oshie.  This situation is changing, though, with Sheary’s power play ice time diminished (less than two minutes in four of his last five games) as Backstrom tries to work his way back into the lineup.  Sheary is 4-2-6, minus-6, in 24 career games against the Islanders.

The Capitals are banged up and have been banged around lately.  Defense and goaltending have let them down to the tune of 18 goals allowed in their current four-game losing streak (0-2-2).  The Islanders are not an especially prolific team on offense, which suggests that if the Islanders post more than three goals, even on home ice, the Caps would have to be considered to have problems on the defensive end – perhaps in goal – that need to be addressed.

Posted by The Peerless at 5:18 PM No comments: