The Peerless Prognosticator is ON THE AIR!!! -- Game 15: Blue Jackets at Capitals, November 9th

The Washington Capitals wrap up this week’s worth of games with a matchup against the Columbus Blue Jackets in the teams’ first meeting since the Caps ended the Blue Jackets’ season in Game 6 of last spring’s opening round of the playoffs.  The Caps are fresh off a 2-1 win over the archrival Pittsburgh Penguins, enabling them to break their standings points tie with the Pens and vault into second place in the Metropolitan Division, one point behind the New York Islanders.

Meanwhile, the Blue Jackets, who are in third place in the division by virtue of the Capitals having played one fewer game (both teams have 17 points), have had about as inconsistent a season as the Caps so far, coming into this game with an 8-6-1 record.  It is a record resulting from Columbus’ inability to get any traction and an avoidance of long losing streaks.  They have had neither a winning streak of more than two games, nor a losing streak longer than that.

Columbus has a productive offense (3.33 goals per game), and it is balanced.  Six players have five or more goals this season, led by right winger Josh Anderson (seven).  The former fourth-round draft pick from the London Knights in Canadian junior hockey (95th overall in 2012) is in his fifth NHL season, and his has been a history of consistent goal scoring improvement.  After spotty appearances in his first two seasons (no goals in six games in 2014-2015 and one goal in 2015-2016), he recorded 17 goals in 78 games in his first full NHL season in 2016-2017 and 19 goals in 63 games last season.  It is part of his development as Columbus’ answer to who will play the role of “power forward.”  He was fifth among the teams’ forwards in hit per game last season (1.7), and he leads the club in that stat this season (2.2, a lot of that fueled by being credited with eight hits in a 4-1 win at San Jose over the Sharks on November 1st), regardless of position.  Anderson comes into this game without a point in his last two games, tying his longest stretch without a point through 15 games this season.  Anderson does not have a point in 11 career games against the Caps and is minus-4.

Seth Jones set a franchise record last season for shots on goal by a defenseman (249), 42 more than teammate Zach Werenski, who established himself in second place on that list last season (207 shots).  Jones' total was fourth among all NHL defensemen last season.  He is in his sixth NHL season after being taken fourth overall by the Nashville Predators in the 2013 entry draft and has appeared in 401 regular season games, 50 more than any defenseman in his draft class (Buffalo’s Rasmus Ristolainen has 361 games played).  It makes it hard to believe Jones just turned 24 years of age last month.  Despite the fact that he has played in only 202 games for the Blue Jackets, Jones ranks fifth on the franchise list of goal scorers among defensemen (32), tied for fifth in assists (92), fifth in points (124), and he is the all time franchise leader in game-winning goals among defensemen (eight).  Jones is 3-7-10, plus-2 in 12 career games against Washington.

Center Riley Nash had something of a breakthrough season last year with the Boston Bruins.  After six NHL seasons (five with Carolina and one with Boston), he put up modest numbers (38 goals and 98 points in 323 games).  Last season, in a contract walk year, he was 15-26-41 (all three numbers being career highs) and a career best plus-16.  It was good enough for Columbus to extend to Nash a three-year/$8.25 million contract, not an expensive deal in today’s NHL, but it did more than triple the AAV in his previous contract ($875,000; source: capfriendly.com).  So far, his work for the Blue Jackets has been unproductive.  He has only two assists in 15 games, and his ice time has dwindled from an average of 15:38 per game in his first five games to an average of 11:18 in his last five contests.  In 21 career games against the Caps, Nash is 4-4-8, plus-2. 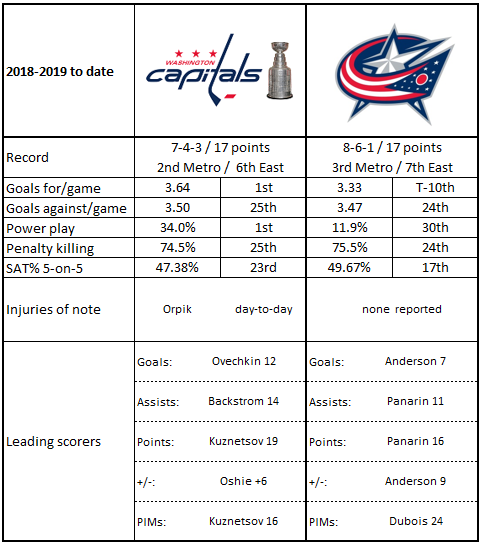 3.  Columbus has had a devil of a time on their power play this season.  Only one Blue Jacket has more than one power play goal (Anthony Duclair has three).

4.  If things go to overtime, Artemi Panarin is the Blue Jacket to watch.  He has the only two overtime goals scored by Columbus this season.

5.  Pierre-Luc Dubois carries a strange number into this game: seven.  That is the number of games in which he has been hit with at least one penalty.  Only one player in the league – Milan Lucic – has more (eight).

2.  With an assist against Pittsburgh, Evgeny Kuznetsov extended his home points streak this season to all eight games the Caps played at Capital One Arena.  His overall home points streak stands at ten games, extending back to last season, and he has points in 22 of his last 26 regular season games on home ice (15-25-40).

4.  T.J. Oshie’s game-winning goal against the Pens was his third game-winner so far this season, as many as the rest of the team combined (Matt Niskanen, Nicklas Backstrom, and Ovechkin with one apiece).

5.  Wednesday night was only the second time in team history that the Caps allowed an opponent at least 42 shots on home ice, recorded only 22 or fewer shots of their own, and won the hockey game.  The other time was in a 4-1 win over the St. Louis Blues on November 17, 2013 in which the Caps had 20 shots on goal to the Blues’ 47.  Braden Holtby got the win in goal that night, just as he did on Wednesday.  The Caps are 2-9-2, with four ties, in those situations at home.

Two seasons ago, Sergei Bobrovsky won his second Vezina Trophy (he also won in 2013).  Last season, he finished eighth in the voting.  This season, it might be fair to ask, what has happened?  Bobrosvky, who has never lost more than 22 games in regulation in a season (which he did last year) already has six losses in 10 appearances (4-6-0), and a disappointing goals against average and save percentage to go with it.  Of 44 goalies with at least 250 minutes played after Wednesday’s games, his GAA of 3.09 ranks 31st in the league, and his save percentage of .902 ranks 27th.  He was wildly inconsistent early on, allowing a single goal three times (once in a 45 minute stint) and four or more goals three times in his ten appearances.

The eight goals he allowed on 31 shots in an 8-2 loss to the Tampa Bay Lightning on October 13th is only the tenth instance since 2005-2006 of a goalie allowing eight or more goals on 32 or fewer shots.  Oddly enough, it is also the only road game Bobrovsky has played so far in the Eastern time zone (the other two were in San Jose and Los Angeles).  He has been much better lately, though, stopping 119 of 126 shots in his last four appearances (.944 save percentage) in building a 2-2-0 record.  But still, with that .876 road save percentage so far, seeing Joonas Korpisalo get the start would not be a total surprise, despite inferior numbers overall (3.80 GAA, .884 SV).  Bobrovsky is 7-10-4, 3.02, .900 in 22 career appearances against the Caps.

When the St. Louis Blues took Dmitrij Jaskin with the 41st overall pick (second round) in the 2011 entry draft, they passed on the likes of Brandon Saad (taken 43rd by Chicago), William Karlsson (taken 53rd by Anaheim), and Nikita Kucherov (taken 58th by Tampa Bay).  He was the fifth-ranked international skater in the Central Scouting rankings that year, the third-ranked forward.   In 2012-2013, in his only season of Canadian junior, he scored 46 goals in 51 games for the Moncton Wildcats in the QMJHL.  However, while he did record 19 goals in 60 games over two seasons with the Chicago Wolves in the AHL, his progress was slowing.  He never really got a foothold in St. Louis, playing all or parts of six seasons with the Blues, posting a career high of 13 goals in 54 games in 2014-2015, his first full season with the Blues.  After that, he managed only 11 goals in 192 games over the next three seasons while averaging 12 minutes of ice time per game.

Jaskin was waived by the Blues in October and claimed by the Caps.  Washington was one of those opportunities for a player to get a new start or reinvent himself.  He started as a bottom six forward, but the new wrinkle in his game was as an effective defensive presence.  In 11 games with the Caps so far, Jaskin has been on the ice for a total of only five goals against.  Part of that reflects ice time (10:26 per game), and part of it reflects quality of competition, but result do matter, and teams have not scored with Jaskin on the ice.  And, his personal shot attempts-for on ice at 5-on-5 (58.59 percent) is best on the team.  He has gotten a promotion of sorts recently, becoming part of the carousel of forwards getting time as the top line right wing as Tom Wilson completes his suspension.  While that has not yet opened up his own offensive game, his presence has not been a liability on that line.  Jaskin is 0-3-3, plus-1, in seven career games against Columbus.

The Capitals win on Wednesday night was the first time this season they won consecutive games.  Columbus hasn’t won consecutive games in regulation in almost a month (since beating Colorado and Florida in Games 3 and 4 on their schedule).  Each team is in search of gaining some traction to raise themselves in the standings.  The Caps have the slightly better recent record (3-1-1 in their last five to 2-2-1 for Columbus), but the Blue Jackets had their California tour (San Jose, Los Angeles, and Anaheim) embedded in that five game stretch (they went 1-1-1).  Both teams are coming off impressive wins, the Caps beating their most bitter rival in the Penguins on Wednesday night and the Blue Jackets beating Dallas, 4-1, on Tuesday.  The Caps are a good home team (5-1-2), but Columbus has a good road record (4-2-1).  Both teams are adept at scoring (Washington at 3.64 goals per game/1st in the league; Columbus at 3.33/tied for tenth).  Both teams have issues on defense (the Caps at 3.50 goals allowed per game/25th; the Blue Jackets at 3.47 goals allowed per game/24th).  On paper, an evenly-matched pair of teams.