Theme: “Over every mountain there is a path, although it may not be seen from the valley.”
-- Theodore Roethke

In Nicklas Backstrom’s first three seasons, the arc of his numbers was unfailingly pointing upward… 14 goals, then 22, then 33… 55 assists, then 66, then 68… 69 points, then 88, then 101… plus-13, plus-16, plus-37. Better than a point a game player in 28 playoff games (30 points on 12-18-30, plus-13). And he did it all without missing a game, regular season or playoffs. For a center with uncommon playmaking gifts and an underrated scoring touch, a Caps fan might have been forgiven if he or she thought that 110 points and maybe a Conn Smythe Trophy was in store for the 23-year old Swede.

Then came that pesky losing streak.

In the 0-6-2 streak the Caps endured in December 2010, Backstrom went 0-4-4, minus-5, and while that was going on the Caps were deciding to change their philosophy to put more emphasis on defense. Backstrom has been a responsible player in his own end, despite his young age, but the change over really seemed to affect his game at the offensive end. From the game in which the Caps broke their losing streak until March 7th, when the Caps beat Tampa Bay, 2-1, in a Gimmick (the significance the date being something we will return to), Backstrom went 6-15-21 in 33 games, a 15-37-52 scoring pace. He did, however, record a plus-13 over that span (a plus-32 pace) that was quite respectable given that the Caps were playing lower scoring games and not generally scoring as much on their own.  The ten-game splits look like this...

But back to that March 7th game. That brought an end to Backstrom’s consecutive games played streak to start his career at 313 games., because in a 1-0 win at Pittsburgh on February 21st, Backstrom appeared to have taken a slash in the hand from Penguin defenseman Kris Letang. The slash might have resulted in a broken thumb for Backstrom (you know how tightlipped the club is on talking about injuries). Backstrom gutted things out for another six games, over which he was 2-0-2. Here is the odd thing, though. In those six games after the game in which he appeared to suffer the injury, he won 28 of 40 draws (70.0 percent). But he took only four of those draws in the first three games after the injury, winning three of them. Backstrom would miss five games after the March 7th game against Tampa.

All in all, after that injury in Pittsburgh on February 21st, Backstrom would finish up the year playing in 16 of the Caps’ last 21 games, going 3-9-12, plus-8. You could say the injury played a part. But if you look at the pre- and post-decision games when it came to the Caps’ change in philosophy, Backstrom was 11-23-34, plus-6 in his first 34 games (and that included the eight-game Caps losing streak). After the change, he was 7-24-31, plus-18 in 43 games. His own offense suffered, but he was on the ice for more good things than bad at even strength.  When compared to last season, though... 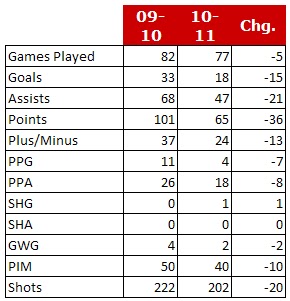 The offense might have suffered for another reason, and that was that Backstrom was expressly called upon to assume a more defensive posture. If you want to read an excellent treatment of that, read this analysis over at Japers’ Rink. But here is something to consider in that context. Backstrom’s offensive zone starts finished at 51.0 percent for the season, and his offensive zone finishes came in at 51.5 percent for the season (down substantially from 58.0 percent and 54.3 percent, respectively, in 2009-2010). Backstrom averaged 0.84 points per game this year versus 1.23 last season. Compare that to another center, one whose offensive zone starts this season came in at 47.0 percent, while his offensive zone finishes were at 53.4 percent. He averaged 1.61 points per game before his own injury ended his season – Sidney Crosby. Just a frame of reference.

Odd Backstrom Fact… Despite a career low in points, this past season marked the third time in four seasons that he had three games of at least four points. Two of this year’s four-point games came against Tampa Bay.

Game to Forget… February 8, 2011. Call it a statement game. The Caps had just come off wins over Tampa Bay (5-2) and Pittsburgh (3-0) and were facing one of the strongest teams from the west, the San Jose Sharks. Backstrom and crew laid an egg. The same quintet was on the ice for both Sharks goals – Backstrom, Alex Ovechkin, Jason Chimera, John Carlson, and Karl Alzner. Backstrom had an otherwise quiet score sheet – two shots on goal, and he dropped ten of 17 faceoffs (he was better than 50 percent against only one of the six opponents he faced in the circle). No hits, takeaways, or blocked shots.

In the end, it appears that a coincidence of events – a change in team philosophy, too much time starting play at the other end of the ice, and injury – derailed Backstrom’s season, at least with respect to the offensive numbers he put up compared to expectations. None of those things should concern Caps fans in and of themselves. Until the freak injury from a slash, Backstrom proved to be very durable (and in fact played through that injury quite a bit). If the Caps use the off-season wisely, he could get some help from having to take so many defensive zone draws (as the folks at Japers’ Rink have argued), and even with a change in team philosophy, he has the skill to jump start those numbers to where he could challenge that 100-point mark again.

But here is another number that is going to have to change for him to challenge that 100-point mark: "22." In his first three season, Backstrom averaged 9-25-34 per season in power play points (79 points over his last two seasons). He was 4-18-22 last season. It was indicative of the power play woes the Caps faced, and not only a product of Alex Ovechkin not finding a spot to be able to convert Backstrom passes. Backstrom had 14 power play goals in 2008-2009, 11 extra-man goals in 2009-2011. He had four this past season.

He gets points for coping fairly well as the number one center on a team that had a major reconstruction of its philosophy in mid-season and for playing through injury. But his overall offensive contributions, particularly on the power play, were somewhat disappointing. That power play area is one that Caps fans might want to watch next year to see if Backstrom – and the Caps – can find their way back to a path that takes them deeper in the playoffs.

Grade: B
Posted by The Peerless at 2:55 PM No comments: