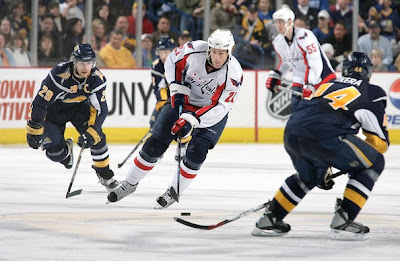 When you’re the return in a trade for a local hockey icon, chances are your journey in your new city is going to be a bit bumpy. For Brooks Laich, the return in a trade sending Peter Bondra to Ottawa in February 2004, the road was a bit bumpy. And in his first 150 games with the Caps over three seasons, it was just that – 15-24-39, -12 on teams that didn’t perform very well. Then last year, Laich took a big step up – 21-16-37, -3, eight power play goals, four game-winners, and six more points in seven playoff games. It got him an “A-“ from this corner last year.

With that step up, Laich grew into something of a cult hero among Capitals fans, becoming the local version of Chuck Norris. That aside, his season last year created some expectations this year, perhaps improving on the sort of production out of the third line that has eluded the team since Steve Konowalchuk averaged 17-22-39, +8 over a six year period in the 1990’s. In fact, Laich did improve on last year’s numbers, going 23-30-53, -1, with nine power play goals, three game-winners, and once more skating in all 82 games. He chipped in another three goals and seven points in 14 playoff games. His ten-game segments went like this…

What steps off the page is the matter of his consistency. Five to seven points per segment, for the most part. At least one goal scored in seven of the eight full segments (not altogether bad for a checking line forward). At least one power play goal in five of the eight full segments (not bad, considering he was fifth in average power play ice time among forwards). At least ten hits in six of eight segments. Between 20 and 30 shots on goal in six of eight segments. He registered at least one point in 40 of 82 games. He played at least two games against 17 teams and scored against 15 of them.

He also seems to be a “Patrick” sort of player, at least this year. The Atlantic Division is made up of teams that used to share a division address with the Caps – the Patrick Division – and Laich had an especially good year against that group: 8-11-19 in 20 games, including a 2-4-6 line against Pittsburgh in four games.

What Laich was able to do better than any Capital forward was draw penalties. His differential of penalties drawn per 60 minutes to penalties taken of +1.2 tied for the team lead (Eric Fehr). But his ratio of penalties drawn to those taken – 4.6:1 – was by far the best among forwards. And that gets to the heart of the matter. More than most, perhaps all Caps forwards, Laich stuck his nose into high-traffic areas, the sort of places one has to go to draw fouls. He had the shortest average shooting distance among Caps forwards, although this is damning with faint praise – Laich was 57th in the league among forwards playing more than 50 games in this measure. The Caps were the hockey equivalent of a jump-shooting team in basketball.

Goal scoring by Laich has turned into something of an intriguing attribute. He’s gone from eight to 21 to 23, a signal that perhaps there is some more upside there. But it is the variety expressed in his 23 goals this year that makes for intrigue about his possibilities. Even strength goals among forwards? Third, behind the Alexes. Power play goals? Third (Ovechkin, Backstrom). First goals? Third (the Alexes again). Game winners? Fourth. If Laich can squeeze a goal or two out of each situational category, he could be the next 30-goal scorer for the Caps.

Laich has shown himself to be versatile – able to play any of the forward positions (he was fourth on the team at 51.1 percent on draws, despite spending most of his time on the wing). He’s been opportunistic, as evidenced by his production in a variety of situations. He’s been durable, playing in all 82 games the past two seasons. He’s been responsible, taking only 13 minor penalties in those 82 games this year (compare that to 16 for Michael Nylander in 72 games and 11 for Chris Clark in 32 games). Being responsible didn’t keep him from exerting a measure of physical play – fourth among Caps forwards with 99 hits.

Laich’s production in the playoffs – 3-4-7, even, in 14 games – was roughly consistent with his regular season pace of scoring. And he did tie for second among Cap forwards in power play goals (two). He could have used some help, but in the end it became evident that the Caps just didn’t have another forward to do the dirty work in difficult areas of the ice. It was dirty work, and someone had to do it. This season, Laich did. But the Caps will need more of it next year – from him and others. He didn’t have quite the leap in production this year that he had last, but it was still a good year.

Email ThisBlogThis!Share to TwitterShare to FacebookShare to Pinterest
Labels: Brooks Laich, the tens 2008-2009 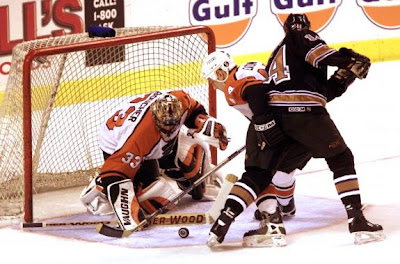 On the heels of the Colorado Avalanche firing Tony Granato and five others in the organization, former Capital Joe Sacco has been named head coach for the Avs.
Sacco played for 13 seasons in the NHL with five teams. He played in 213 regular season games over three seasons with the Caps, going 14-30-44, -2, with 149 penalty minutes earned.
Promoted from the Colorado affiliate Lake Erie Monsters the past two years, he joins Craig Billington -- a former Caps goalie -- who is assistant general manager for Colorado. Congrats, Joe.
Posted by The Peerless at 7:15 PM No comments:

A Hall of Famer..."surprised and disappointed"

Tom Glavine was released by the Atlanta Braves yesterday. Glavine, a 22-year veteran of major league baseball, has won 305 games over the course of his career, including five 20-win seasons. He can also point to eight all-star games, two Cy Young Awards, and a World Series most valuable player award on his resume. He is, by any definition of the term, one of the all time greats in major league baseball history. He responded to his release by texting, “I’m surprised and disappointed. I’m ready to pitch.”
But as any hockey fan probably knows, baseball wasn't the only thing in which Glavine had talent. Glavine was a fourth-round draft pick of the Los Angeles Kings in 1984 (69th overall) after putting up 47 goals and earning the Merrimack Valley Conference most valuable player trophy with Billerica (MA) Memorial High School.
Glavine was drafted ahead of such notables as Brett Hull (6th round/117th overall), Luc Robitaille (9/171), and Gary Suter (9/180) in the 1984 draft.
Glavine, although he is 43 years old, might be "surprised and disappointed" over his release from the Braves, but he doesn't sound like a guy ready to hang up his spikes. Sounds like a hockey player.

Thanks to SpeedKillz over at The Official for reminding us of Glavine's previous life.
Posted by The Peerless at 6:15 AM 2 comments: