Meanwhile, down in Hershey (where the Bears beat up on the Phantoms, 9-0 last night), the rookie scoring leaders are among the league leaders...

And as far as plus-minus goes, it looks like the Hershey roster... 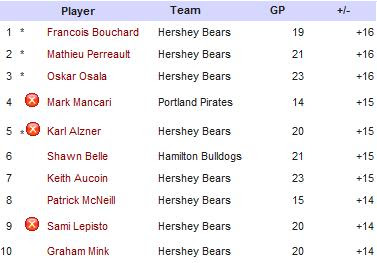 You'd think that for a team with 17 wins in 23 games, the Bears also would be well-represented in the game-winning goal category. However, only Graham Mink cracked the top ten (eighth, with three), which shows that not only are the Bears winning, but they're spreading things around, too.

Nice month, all in all

So…what did we miss?

The Caps won two of three, scoring eight goals, giving up six. They keep doing that over the rest of the season, they finish with 106 points. We suspect most Caps fans will take that.

As for the Hershey Bearpitals – Graham Mink, Sami Lepisto, Karl Alzner, and Chris Bourque – it wasn’t a bad weekend…

…but at least one of this group was on the ice for five of the six goals scored against the Caps this weekend (Alzner 3; Lepisto and Bourque, one apiece). That giveaway number is a nasty one, though.

Alexander Ovechkin attemped 49 shots (19 shots on goal, 19 shots blocked, 11 missed shots). He had 63 shifts in the three games. That’s 0.78 shots/shift, which we’re going to guess led the league…probably by a lot. Some might view this as selfishness (Penguin fans, we’re looking at you), but given the state of the Caps’ health, we look at this as stepping up.

Jose Theodore and Brent Johnson stopped 71 of 77 shots in the three games. A combined save percentage of .922 will give the Caps chances to win in more games than not. And that's stepping up, too.

Is the NHL a frontrunner’s kind of league? Only one team (San Jose) has a winning record when trailing after two periods. The Caps have only won twice in eight such situations (they lost to Columbus in the one instance this weekend), but their .250 winning percentage is good for eighth in the league.

No team in the NHL has a worse goal differential on the road than Washington (-15). No team has allowed more power play goals against (17 in 14 games), which goes along with their having endured the most shorthanded situations (81). Their 55 total goals allowed on the road is six more than any other team (Nashville: 49). That’s bad enough, but there is another problem here…only two teams have given up more goals in the third period than Washington (Columbus and the Islanders). Yes, Detroit has given up 25, while the Caps have allowed 27, but the Caps are not Detroit…mainly because the Caps have also given up 27 in the first period, while the Red Wings have allowed only 15.

Here is the odd thing about the Caps’ penalty killing…79.0 percent at home, 79.0 percent on the road. The difference is in that the Caps have been shorthanded only 38 times in ten home games and those 81 times in 14 road games. It’s all part of a piece…sloppy, lack of energy, absence of focus. They have to become a better road team.

We’re not sure what to make of this one…the Caps have the third fewest fighting majors in the league (eight, behind Detroit and Florida). Three of them came in one game (opening night, a 7-4 loss to Atlanta). The Caps are 4-2-0 games when they recorded a fighting major (they lost another when they drew one, when Tyler Sloan drew a major without incurring one of his own in a 2-1 loss at Calgary).

The Caps finished November with an 8-5-2 mark. That is the first time they have finished a November over .500, and it marks their highest win total since getting nine in November in 1996. If you’re wondering about “best November,” that was in 1985-1986 (10-3-1). As for the years since that nine-win effort… 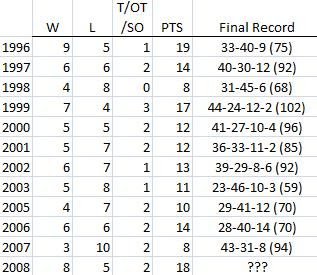