It is April 1st, by custom referred to as “April Fools’ Day.”   One story of its origin has it beginning in ancient Rome, a part of “Hilaria” festivals celebrated at the start of spring to honor their “Great Mother.”  Today, it is an excuse to play practical jokes and perpetrate hoaxes on the gullible and unsuspecting among us.  All in the interest of good fun and, well, hilarity.

But given that April Fools’ Day comes so close to the trading deadline in the National Hockey League, chances are there will be a fair number of April Fool’s Day jokes made with this deadline in mind and with the intent of inspiring wailing and teeth gnashing among hockey fans who are on tenterhooks concerning their favorite teams’ intentions concerning possible trades.

So, as a public service from your Uncle Peerless, we bring you those things that are NOT going to happen over the next few days as the NHL approaches zero hour on trade deadline day…

And there you have it, a short list of examples of the sort of April Fools’ Day jokes that need to be debunked now, before Caps fans go all “Caps fan” and indulge their well-developed sense of paranoia.  Consider yourselves warned.

Posted by The Peerless at 6:47 AM No comments:

Washington Capitals -- That Was The Week That Was: Week 10

Marking time.  That was what the week that was...was.  And from where the Caps stand, that just won't be enough to make up the points they need to reach the playoffs.  Making it worse was that it could have been a lot better. 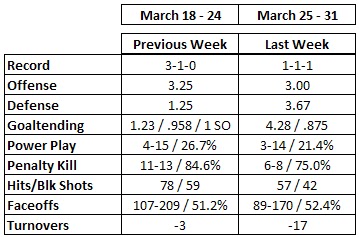 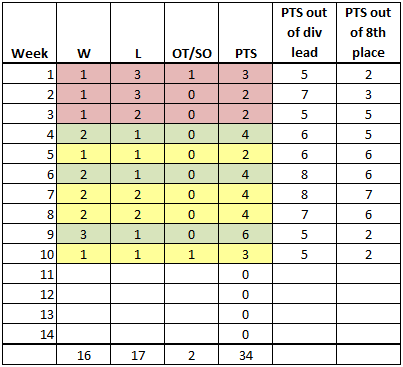 The Caps were, in a sense, “upside down” this week.  They lost at home to the New York Islanders, then they took three of four points on the road.  It made for the seventh consecutive non-losing week for the Caps over which they are 13-9-1.  That is a 96-point full season pace, but whether that pace is going to be sufficient to overtake three teams ahead of the Caps or Carolina and Winnipeg to win the Southeast Division.

The Caps came from behind in all three games this week, three times overcoming two goal deficits, twice in the same game (against Buffalo).  The flip side of that is that the Caps got off to poor starts.  They had one first period goal for the week, shooting 1-for-29 overall (3.4 percent).  Ten different Caps shared in points this week, seven split the nine goals scored, Alex Ovechkin and Mike Green each getting a pair.  The big number for the week (and we do mean “big”) is this” 44.  That is how many shot attempts Alex Ovechkin recorded in four games – 20 shots on goal, 13 shots blocked, and 11 missed shots.

Braden Hotlby played every minute this week, and one gets the feeling he needs a break.  He has figured in the last eight decisions for the Caps, going 5-2-1, but this week he struggled at times.  That .762 save percentage in the first periods of games put a lot of pressure on this teammates to spend a lot of effort coming back in games, and when that happens, a 1-1-1 record is what results, even against three teams that were behind the Caps in the standings.

At some point, teams are going to adjust to what the Caps are doing.  But for the time being, the Caps’ power play is formidable – another 20-plus percent week.  One does wonder, though, if that point of adjustment is going to come sooner rather than later.  Of the last seven power play goals scored by the Caps, Alex Ovechkin has five of them.  He had two of the three extra-man tallies this week, scoring goals in the only two games in which he recorded power play shots (1-for-3 against both Buffalo and Philadelphia).  The takeaway on the power play this week might be the difficulty the Caps had with a full two-minute 5-on-3 power play against the Flyers.  They managed three shots on goal, but two of them were long range drives by Ovechkin.  The power play so formidable at 5-on-4 was not with the extra man off the ice for the Flyers.

The Caps were one power play goal from being pretty good this week.  It was that one puck that squirted through Braden Holtby that was lying still in the crease that Ville Leino poked in for the Sabres that made the results for the week so-so.  But there was still the efficient 16-second power play the Flyers had, scoring just those few seconds after Troy Brouwer took a holding penalty with the Caps up two goals in Philadelphia.  The key remains for this team to stay out of the box, because mechanically they are not a very good penalty killing team.

The thing here is that the Caps seem to be slipping through the rankings.  And the hits might be a bit of a concern.  Buffalo and Philadelphia outhit the Caps by a combined 57-35.  If might be hometown scoring effects at play there, but it is a fair question -- are the Caps going to be tough enough down the stretch?

Winning is better than losing anywhere on the ice, but then again, it is hard to get too excited about the 52.4 percent result in the circle for the week.  The Caps were a combined 49.6 percent in the offensive and defensive ends, 57.9 percent on neutral zone draws.

The wheels were wobbly this week.  A loss in regulation to the New York Islanders – a thoroughly beatable team, a come-from-behind trick shot win over Buffalo, and an overtime loss to Philadelphia when they held a two-goal lead in the third period and a one-goal lead with 11 seconds left in regulation.  With the Caps on the wrong side of the playoff divide, it was not good enough.  And it was the third periods of the games beginning and ending the week that did them in.  Had the Caps at least held their own in those games, they would have forced extra time against the Islanders and won in Philadelphia.  That would have been two extra points, at a minimum, and the Caps would be in eighth place, one point ahead of the Rangers.  If “cautious optimism” were the watch words we spoke of as last week ended, after this week the obvious word that comes to mind is…