It’s time to take a look at the week that ended last night, so let’s get to it… 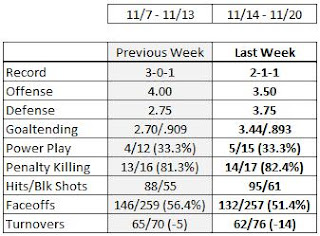 The week started relatively smooth and ended with hitting a few potholes. Wins over Atlanta and Buffalo on home ice extended the home ice record to 10-1-0 and the points streak to nine games. But all good things do come to an end, and they did in a big way in Atlanta in the rematch of the first game of the week. Three goals on five shots put an end to the competitive portion of the evening early, so it was left to the week’s last game – against Philadelphia – to make the week one of greater separation between the Caps and the rest of the East or one of decent (if unspectacular) production. In the “glass half empty” interpretation of the Flyers game, the Caps lost for the second time on home ice, the Young Guns managed only one goal and two assists, and Michal Neuvirth was not consistently sharp. In the “glass half full” interpretation, the Caps fought back from a two-goal deficit against a team that clamps down on the road, then they came back again to tie the game late in the third period after allowing a goal. In the individual pieces, you can find faults. From the “team” perspective, you can see things to make this game – and the week – seem a lot more tolerable.

If there was one word to describe the Caps’ offense this week, it might be “donut.” Six first period goals, six third period goals…two in the second period. Balance was the word of the week for Caps scoring. There were 17 skaters who registered points in the four games (John Carlson and Boyd Gordon the only skaters not getting on the score sheet). Three players had four goals, and another four had three points apiece. Let’s take a look at those three players with four points – Matt Bradley, Jason Chimera, and Alexander Semin. This is not generally the group one might expect would lead the team in scoring over a week’s worth of games. As for the other Young Guns, Alex Ovechkin and Nicklas Backstrom finished with three points apiece, Mike Green with two. There was some order in the goal scoring with Backstrom and Semin getting two apiece. But then again, so did David Steckel (the first time in his career he had goals in consecutive games). Ovechkin had one, and by the end of the week had three in his last ten games.

If last week was not an especially good week for on the defensive side of the ledger, this one was rather grim. The Caps allowed four or more goals in three of the four games and now have allowed 33 in ten games in the month of November. This qualifies as a matter of concern, especially since there is some consistency in the volume of goals the Caps are allowing. In addition to the three games in four that the Caps allowed four or more goals this week, they have allowed three or more eight of the ten games so far this month. And here is something rather ominous in the week’s defensive numbers. No one was shutting anyone down on the blue line. A lot might be made of Tyler Sloan being on the ice for four goals in the 5-0 loss to Atlanta on Thursday, but Jeff Schultz was on the ice for seven of the 15 goals scored against the Caps this past week, Mike Green for six. John Erskine was on the ice for the fewest number – three. At first blush the thought is that the Caps miss Tom Poti, but the fact is that the in five games Poti had played this season (only one since (October 21st) the Caps allowed 16 goals (3.2/game). In 16 other games the Caps have allowed 42 goals (2.63/game). The population of games is not large enough to draw any conclusions about Poti’s value to the team so far this season on defense, but one thing we can say is that this team really needs to play better with or without him on the blue line. At the moment the other defensemen are regressing, not to mention...

Not a good week. The difficult time that Braden Holtby had to open the game in Atlanta dragged the save percentage under .900 for the week, but it was not as if Michal Neuvirth was making anyone forget Olaf Kolzig… or the Michal Neuvirth of October, either. If anything, Neuvirth’s week was inconsistent. The bookends of the week were not very good; he stopped only 54 of 62 shots in the two games (.871). In the middle two games he stopped 60 of 64 shots (.938). But the differences between the October and November versions of Neuvirth are rather stark:

Another 33.3 percent week. That’s the good part. Getting three more chances over the four games compared to the previous week. That’s good, too. Power play goals in three of the four games…good again. Spreading the power play scoring around… Nicklas Backstrom had two of the five, Eric Fehr, Jason Chimera, and Mike Green getting the others. But where is Alex Ovechkin in all of this? So far this season he has two power play goals, both scored in the same game October 30th in a 7-2 win over Calgary. We are one-fourth of the way through the season, and Ovechkin doesn’t have a power play goal on Verizon Center ice? Odd, indeed.

The Caps allowed three power play goals in four games for the second consecutive week. The best teams on the penalty kill generally allow one or fewer in every two games (there are five such teams in the league this morning – Boston, Florida, Montreal, Tampa Bay, and Pittsburgh). Allowing power play goals to Atlanta and Philadelphia is not the worst thing to happen to a team; they rank sixth and 11th on the power play so far this season. But allowing one to Buffalo? The Sabres scored an extra-man goal in each of the two games played against the Caps so far. They rank 26th in the league on the power play. Overall, though, the Caps allowed a total of three goals on 34 shots on 17 power plays against. They allowed only two goals on 29 shots at 4-on-5 (a .931 save percentage). They certainly have the capacity to bear down and kill off these situations, and even in terms of the situations, nine of the 17 shorthanded ones came last night in one of the more curiously officiated games that the Caps have had this season. Limiting the other three opponents to a total of eight this past week is a good sign. It’s nice to be able to kill off penalties, better if you don’t have to face too many of them.

A better week in this regard, but the blocked shots number is odd in this respect. While the Caps did record more blocked shots this week than last week, they also allowed more shots to get to the net (121). Ten shots more this week than last means, on average, giving up one more goal than you would expect (based on the usual save percentage statistics). Had that goal not allowed come last night, we would have a different tone to this post this morning.

It was a bit of a drop off this week, which is an unexpected result owing to the fact that none of the three teams the Caps faced this week (Atlanta being faced twice) is over 50 percent on faceoffs for the season. In fact, if not for David Steckel (44-for-62, a 71.0 percent winning percentage), the Caps would have been 45 percent for the week against some weak teams in the circle.

If last week was not a good one in this measure, this one was just plain bad. Every turnover – a giveaway or the other team’s takeaway – is a potential scoring opportunity, and the Caps allowed more than one more per period than they had for themselves. Among the turnovers was a total of 41 giveaways for the week, leaving the Caps a little too close to the top of the league for comfort in this regard (fifth highest number, but only two from the second highest spot).

2-1-1 isn’t necessarily a bad record, but being shut out by a team that ranked 29th in the league in goals allowed per game (Atlanta) does not get a pass. It earned Bruce Boudreau’s comment that it was “as bad of a defeat I think I have had since I’ve been here.” In an 82-game season those games are going to creep in from time to time, even among very good teams. It is one thing to acknowledge that fact and another to accept it uncritically. To their credit the Caps fought hard the next night against the Flyers, rallying twice to send the game to overtime and, eventually, the Gimmick. For good teams, bad games come in groups of one. They do not form clusters that take up a week on the season’s schedule.

Although there are those Caps fans who will look upon this week as something of an opportunity lost (and it is reasonable to think the Caps should have beaten Atlanta and not fallen behind the Flyers twice), there is some simple arithmetic that merits mention. The Caps played four games this week and earned five points. It is a small number of games but five points in every four games will earn you 103 points in a season. There are things the Caps need to improve upon, but if that pace is the worst the Caps post in any week this season, it’s going to be a fine regular season.
Posted by The Peerless at 11:32 AM No comments: