What the heck was THAT? 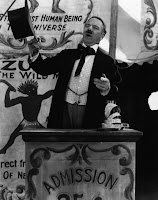 At first, I didn’t know how to describe him and his rant against Caps fans on Comcast Sports Net yesterday. “Him,” in this case, is Washington Post columnist and bad-boy wannabe Mike Wise, who declared “war” on Caps fans for having the temerity to take exception to the timing, tone, and “attitood” he has displayed in his coverage of the Washington Capitals.

We caught a clip of his rant on Caps fans this morning, and all we could do was think, “hmm…now I understand why newspapers are going in the toilet.” We were thinking that perhaps his spittle-inducing screeching about Caps fans had to be a new high in lows for local sports talk. We couldn’t believe our ears… he declared that he is “at war” with Caps fans (well, the ones who aren’t fawning over this or that column he might have written in the past couple of years)? “At war?” I was conjuring images of Khrushchev beating a shoe on the table as he was ranting on and on.

We were tempted to conclude that Wise thinks that Caps fans take their devotion to the team a little too seriously. Truth be told, there is a sizable portion of Caps Nation that considers the team the center of a Ptolemaic universe around which even the sun orbits. But leaving aside the notion that “fan” is generally thought to be short for “fanatic,” do Caps fans take their team any more seriously than grown men who doll up in dresses and hog snouts for a local football team? Than a sports writer who would go on and on… and on… in a lengthy column serving as the house apologist for a person who would consider defecating in a teammate’s shoe the epitome of humor? Now that was serious stuff. I read that column and thought Jerry Lewis was going to host a telethon to make up the salary Gilbert Arenas had to forego as a result of his suspension.

Of course, if all of this indignation over the response of Caps fans was sincerely felt, one might forgive him for thinking Caps fans are too serious. Remember, this is a guy who proclaimed – loudly and proudly during his rant – that he spent a year working on an article about a former Capital (ok, we get it… you’re a “serious journalist”), and he seems to feel somewhat unappreciated. But for heaven’s sake, Woodward and Bernstein didn’t work for a year on Watergate. Well, ok, they did, but it was a little bigger story.

As he put it in his declaration of war on Caps fans, “it’s on…it’s on like Donkey Kong” – a phrase sure to take its place in the annals of famous wartime quotes such as, "damn the torpedoes, full speed ahead," or even “nuts!” Do people actually use that phrase – “it’s on like Donkey Kong” – anymore? Mike, as a Caps fan I don’t much care if you write about the Caps, don’t write about the Caps, or wear Gilbert Arenas pajamas to bed at night.

That's what I might have concluded if I thought this was a serious argument.

But you know? I could almost see the wink at the camera as he was going on with his rant. It was in the finest tradition of the old time carnie barker. Mike, I know you weren’t serious, and I suspect we can all stand down from “DEFCAP 1.” You were just playing for attention, to get a rise out of Caps fans. Hey, we understand. You gotta do what you gotta do to get ratings for your radio show and eyeballs reading your stuff in the Post. We get it. It’s an act. It’s your schtick, your hook, your thing (even if it is derivative of a few dozen other shock jockeys across the sports talk landscape). Consider it a victory, big guy. We paid attention. Now if you’ll excuse me, I have a hankerin’ to play some Donkey Kong.
Posted by The Peerless at 10:35 AM 8 comments: