The Peerless Prognosticator is ON THE AIR!!! -- Game 64: Philadelphia Flyers at Washington Capitals, March 4th

The Washington Capitals take the ice on Saturday for the second game of a three game home stand, hosting the Philadelphia Flyers at Verizon Center in a 7:30 start.  The Caps will be looking for their third win in a row and their 15th straight on home ice (all but one in regulation time, it merits noting, and that one was in overtime, not the Gimmick).  Meanwhile, the Flyers will be looking to win their third straight decision as well.  Unfortunately, for them at least, they are 3-11-2 in their last 16 road games.

The offense, such as it is, over those last 16 road games is led by Braden Schenn, who leads the team in goals (eight) and points (15, the only Flyer in double digits in those 16 games).  The odd things about the eight goals is that seven of them have come on power plays, more than half the club’s total in their last 16 road games (11).  Schenn is on a pace overall to finish with his second season with more than 20 goals (25; he had 26 last season) and his second season with more than 50 points (55; he had 59 last season).  He brings a six-game points streak overall into this game (3-4-7, minus-1).  What he also brings is a minus-20 for the season, more than doubling the “career minus” he had coming into this season (minus-19).  Schenn is 4-5-9, minus-3, in 22 career games against the Caps.

Wayne Simmonds is the only other Flyer with more than three goals over their last 16 road games.  He has six in that span, half of them on power plays.  His power play scoring comes with an odd passenger of a fact.   In 12 games overall in which he recorded power play goals this season, the Flyers are just 6-6-0.  However, in the eight games in which he has a power play assist, the team is 6-2-0, evidence that it truly is better to give than to receive.  If giving is a synonym for “dishing,” then Simmonds has been dishing it out in another respect.  He has 29 penalty minutes in those last 16 road games to lead the club.  Simmonds is 5-8-13, minus-3, in 27 career games against the Capitals. 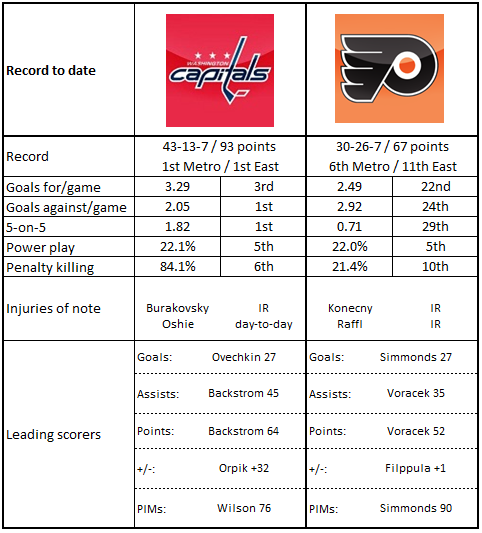 1.  Philadelphia has just 16 even strength goals in their last 16 road games. While there is a certain charming symmetry to that fact, it isn’t exactly conducive to winning.

2.  Philly’s problem in this road game stretch is secondary scoring in “primary” amounts. After you get past Schenn, Simmond, and Voracek, only Nick Cousins has more than one goal (two), and there are eight players with one.

4.  Philadelphia has had more power play opportunities since January 1st (82) than any team in the East and just one fewer than the Nashville Predators (83, but in three more games).

5.  The Flyers are the fourth-best team in the league since January 1st in shot attempt percentages at 5-on-5 (53.11 percent; numbers from NHL.com).

1.  How good is the Caps’ 14-0-0 record at home in 2017? The team with the second-best record (Nashville) is 9-2-3, seven fewer points than the Caps (21 to 28) in the same number of games.  It’s like the Predators hitting the quarter pole as the Caps are crossing the finish line in a mile-long race.

5.  Not that this should surprise anyone, but no goalie in the league has played more minutes with a lead this season than Braden Holtby. His 1,438 minutes playing with a lead is more than 100 minutes ahead of Toronto’s Frederik Andersen (which is something of a surprise) with 1,332 minutes (numbers from Corsica.hockey).

Brandon Manning had to fight to get to the NHL, and he has had to fight to stay there.  Signed by the Flyers as an undrafted free agent in November 2010, it was quite a climb for the British Columbia native to get to the bigs.  After spending what would be his fourth season with the Chiliwack Bruins of the Western Hockey League, he moved up to the Adirondack Phantoms in 2011-2012 where he spent the next three seasons with the occasional call up to Philadelphia.  He moved with the Phantoms to Lehigh Valley in 2014-2015, but that would be his last year in the minors.  Manning played 56 games with the parent club last season and has played 53 games so far this season in Philadelphia.

However, he missed the last two games, courtesy of a suspension handed down by the league for his hit on Pittsburgh’s Jake Guentzel on February 25th.  It isn’t the first time he’s mixed it up with a player and been at the center of controversy over it.  Manning is eligible to come off his suspension in this game against Washington.  He will be welcomed by Flyers Nation.  He is second among Flyer defensemen in penalty minutes (51, to Radko Gudas’ 63) and he is one of seven Flyer defensemen with point totals in double digits (3-7-10).  He also has 11 fights in 130 career NHL games.  It will be wise to pay attention when he is on the ice.  Manning is 0-1-1, minus-2, in four career games against Washington.

When Andre Burakovsky went out of the lineup with an injury against the Detroit Red Wings at the 15:34 mark of the first period in their game on February 9th, is came at a most inopportune time for what became a formidable third line of Burakovsky, Lars Eller, and Brett Connolly.  Eller does not have a goal since Burakovsky went out (he does have five assists, including one in that Detroit game that came after Burakovsky left); Connolly is 2-1-3 since Burakovsky went out, one of those goals coming in that game against Detroit (Eller earning his assist).  For Connolly, getting shots has been an iffy thing lately.  In eight games following that win over Detroit, he has 11 shots but has drawn a blank in three of those contests, even while averaging abour 45 seconds more per game in those eight contests than he did in his first 41 games of the season.  And making this recent run a bit stranger is the fact that Connolly scored his two goals since Burakovsky’s exit on the only shots he recorded in those games.  Connolly is 3-0-3, even, in nine career games against the Flyers.

When the sun came up on January 1st, the Flyers were 20-14-4, their 44 points just three behind the Caps at the time.  They have sunk through the standings like a stale cheese-steak since, three points behind the New York Islanders for the second wild-card spot and with three teams to jump over to secure that spot.  This game will open a four-game road trip for the club that could very well mean their season.  They will be desperate.

Facing a desperate team that also happens to be a bitter divisional rival presents unique challenges to a team like the Caps, who find themselves comfortably atop the league standings (five points clear of Minnesota with one more game played).  The basic challenge here is to avoid getting caught up in the Flyers’ desperation, and its attendant orneriness, and be disciplined within the system they play.  If they do that, the Flyers will leave Washington and head to Buffalo a more desperate team than the one that arrived here.

The Washington Capitals had an historic night on Thursday, defeating the New Jersey Devils, 1-0, for their 14th consecutive win on home ice, a franchise record. It was a game that showed the Caps could win slow and dull in addition to fast and thrilling.

The only goal of the contest came in the third period on a power play, and it was a make-shift second power play unit that did the damage. Evgeny Kuznetsov worked the puck along the right wing wall, then swung into the faceoff circle. He tried to feed Brett Connolly between the hash marks, but the puck pinballed among several players before ending up on the stick of Jakub Vrana cutting into the low slot. Vrana collected the puck and wrapped it around the right pad of goalie Cory Schneider at the 7:21 mark for the game’s only score.  It was enough for Braden Holtby, who stopped all 15 shots he faced for the shutout.

-- The shutout was the Caps’ 11th of the season, extending a club record for shutouts in a single season.

-- Washington held the Devils to 15 shots on goal, a season low for an opponent.  They held the Detroit Red Wings to 17 shots in a 6-3 win on February 9th.

-- Jakub Vrana’s goal was his second of the season, second of his career, and second game-winning goal.  He had the game winner in a 4-1 win over the Buffalo Sabres on December 9th.  He also led the team with four shots on goal in this game.

-- The power play goal was a welcome event.  The Caps, who went 1-for-5 on the power play in this game, came into the contest just 1-for-11 on the man advantage over their previous five home games.

-- Brooks Orpik served up a double helping of grit, leading the team with five hits and doing the same with six blocked shots.

-- Kevin Shattenkirk led the team (tied with John Carlson) with 21:24 in ice time.

-- New Jersey narrowly won the shot attempt numbers at 5-on-5 (38-35; numbers from Corsica.hockey), but it hardly seemed to matter in a game where the visitors’ chances were few and far between.

It was a clinic.  The 1-0 score was a bit deceptive, with Evgeny Kuznetsov and John Carlson an inch or so from getting goals that ended up being misfires off the post.  The defense was stifling, and Braden Holtby did the rest.  That’s not to say it was a perfect game; the Caps didn’t excite at even strength, either, and they do miss T.J. Oshie in the lineup.  But at this point of the season, where focus and discipline can be hard to find, the Caps had it for the most part.  It was a good way to open the home stand.