Cities with teams in both major professional winter sports*...

“It's not whether you got knocked down;
it's whether you get back up.”
-- Vince Lombardi
Now...Washington will get back up, won't it?
*  Records of cities' best team in each sport, as of March 28th.
Posted by The Peerless at 8:14 AM No comments:

The Peerless Prognosticator is ON THE AIR!!! -- Game 78: Capitals at Bruins, March 29th

Yeah, Fearless, I think we’re pretty much there.

“I thought it was a ‘hockey game.’ Did I miss the newsletter, cuz?”

No, Cheerless, it’s just that the Caps have five games left and really can’t afford to be giving up any more points.

It’s a “must win” game, Cheerless.

“But it’s still a hockey game.”

“And what if they don’t win? Do they get shot or something?”

Because if they don’t win, they’re not likely to go to the playoffs.

“And…that’s it? They don’t go to the playoffs?”

You mean like oral argument on the Affordable Care Act?

“Huh?... Nah. There’s that Route 29 Batman guy. And Martina Navratilova getting kicked off Dancing With The Stars. And the news that there’ gonna be a sequel to ‘Anchorman.’ There’s real stuff goin’ on, cuz.”

You have a point, as always, Cheerless.

Meanwhile, amidst this whirlwind of news, the Caps will be in Boston to try to salvage their chances at making the playoffs. It is not looking good, not when you consider that the Caps are 2-3-2 in their last seven games and headed out of town having gone a disappointing 1-1-1 on a three-game home stand. And on top of that, the Caps are not catching the Bruins at the most opportune time. Boston comes into this game having won three games in a row and five of their last six after enduring a four-game losing streak in which they allowed 21 goals and scored only eight of their own.

In this five-of-six stretch Boston has outscored their opposition, 23-10, including an 8-0 annihilation of the Toronto Maple Leafs on March 19th. In none of those six games did the Bruins allow more than two goals. It is a far cry from their performance earlier in the month, when they lost the services of back-up goaltender Tuukka Rask to a groin/abdomen strain and lost six of eight games in especially ugly fashion.

The “ugly” was some uncharacteristically loose goaltending from Tim Thomas, who earned the decision in each game of that 2-6-0 run, marrying that record to a 4.26 goals against average and a .830 save percentage. By the time the Bruins hit bottom in this streak with a 6-2 loss at Florida on March 15th, they were only one standings point ahead of the Ottawa Senators for the top spot in the Northeast Division. 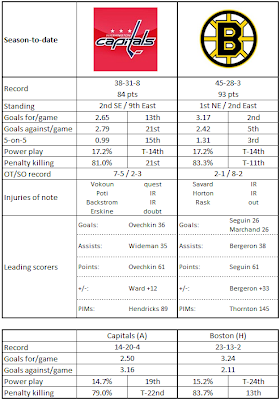 1. Looking for a line that is clicking? Chris Kelly, Benoit Pouliot, and Brian Rolston are have nine of the Bruins’ 23 goals in this 5-of-6 run, and they are a combined 9-16-25.

3. Only once in these last six games have the Bruins allowed more than 30 shots in a game (Tim Thomas stopped 42 of 44 shots in a 4-2 win over the Los Angeles Kings), and they have held opponents under 20 shots twice.

1. For those of you putting your eggs in a “five-game winning streak” basket to end the year, the Caps have not won five in a row since their seven-game streak to open the season. They have had two four-game streaks, the last one ending on March 13th.

5. If Tomas Vokoun gets the call tonight, he has one of those unfortunate records against a team built by playing for poor ones. While he is 7-10-1-2 against the Bruins over his career (one tie), he does have a 2.66 goals against average and a pretty good .926 save percentage with two shutouts.

One of those 20 players with at least ten points for the Bruins is Brian Rolston. Along with defenseman Mike Mottau, Rolston was obtained in trade from the New York Islanders at the trading deadline for Yannick Rienndeau and Marc Cantin. In 16 games with Boston, Rolston is 3-10-13, plus-7. Compare that to his 4-5-9, minus-12 line with the Islanders and landing in Boston seems like a new lease on his hockey life. Or perhaps a sense of familiarity, since he did spend four-plus seasons in Boston, going 101-135-236, plus-23 in 338 games. He has points in seven straight games coming into this one (3-9-12) and is 14-19-33 in 50 career games against Washington.

The Caps have been stumbling around the edge of the playoffs for several months now, and with the season down to its last five games Dale Hunter is going to have to reach deep into his bag of tricks to find a way to lift the Caps over these last five games. After likening the game on Tuesday against Buffalo to a “Game 7,” the Caps fell flat on their collective keisters. What does he say, if anything, to a bunch that seems to lack the ability to raise themselves up from within? As much as any player on the ice, what Hunter can conjure up as a motivating spark could be what is needed. Then again, if you need motivation to play your best at this time of year, you are not likely to be successful.

1. Off-beat. Tim Thomas is a feisty sort. Get him out of rhythm – annoy him, pester him. He wants to play his game like a Sousa march, on the beat for 60 minutes. The Caps need to play some off-beat music and make his life less predictable for 60 minutes.

2. Cast out the castoffs. It is worth noting, without attaching deeper meaning to it, that the Chris Kelly-Benoit Poulio-Brian Rolston line is not home grown. All come from other organizations (Kelly from Ottawa, Pouliot from Minnesota and Montreal, Rolston from, well…just about everywhere else, it seems; the Bruins are his fifth franchise, two of which he played for twice). They are the hot trio, and it is they who must be stopped. If the Caps can’t stop them (and they had trouble with Buffalo’s hot forwards), this is not going to end well.

3. Ovie hears a who. As in, “who is going to do some scoring to supplement Ovechkin?” He has nine of the Caps’ last 18 goals. If the Caps don’t get scoring from some other folks, the Caps are going to find themselves one step closer to elimination.

In the end, what is it going to take? This team is about as healthy as it has been since January 3rd (when Nicklas Backstrom went out), save for the accumulated bumps a bruises all teams have by now. There isn’t a magic potion, there isn’t some pill they can take, there isn’t any “as seen on TV” contraption that they can order to find that spark they need to get them over these last five games and into the playoffs. It is playing as they can, without all the drama, without all the ghastly mistakes, without all the navel-gazing post game quotes about how things are “unacceptable” and how they need to play better.

Just play better. You can do this.