The Peerless Prognosticator is ON THE AIR!!! -- Game 14: Panthers at Capitals, November 2nd

An abbreviated prognosto today, since we were guilty of too much celebrating after the Caps’ win over Philly last night.

The Caps return home tonight to face the Florida Panthers, who had a game of their own last night, a 4-0 loss to the St. Louis Blues in Florida.  Here are five things in the “know your enemy” file…

-- Since winning their opening night contest, the Panthers have stuck on toast.  They are losers in their last four (outscored by a 12-6 margin), seven of their last eight, and 10 of their last 12 games.

-- Florida might be named the “Florida 20’s,” because they are ranked in the 20’s in most of the headline team stats (see the table below).  The clear dividing line of rare success and frequent failure this season is the number “3.”  Score more than three goals, they win.  They have done this twice, a 4-2 win at Dallas on October 3rd (opening night) and a 6-3 pasting of the Penguins on October 11th.

-- Unfortunately for the Panthers they have scored three or fewer goals 11 times and have been shut out three times so far, twice by the Blues.

-- It’s not goalie Jacob Markstrom’s fault.  Well, not all his fault.  Markstrom got the call in the last three contests for Florida after Tim Thomas went down to injury.  He stopped 62 of 71 shots, a .873 save percentage.  He lost all three games (0-2-1).

-- The seven-goal win over Philadelphia was the Caps’ largest margin of victory since beating the Atlanta Thrashers (now the Winnipeg Jets in the NHL witness protection program), 8-1, on January 9, 2010.

-- Joel Ward’s hat trick against the Flyers was the first of his career and his first multi-goal game since potting pair on opening night against Tampa Bay last season.

-- The Caps have now run off eight straight games of perfect penalty killing performance and have killed off 30 kills in a row dating back to the third period of their 5-1 loss to Colorado on October 12th.

Here is how the teams' numbers compare... 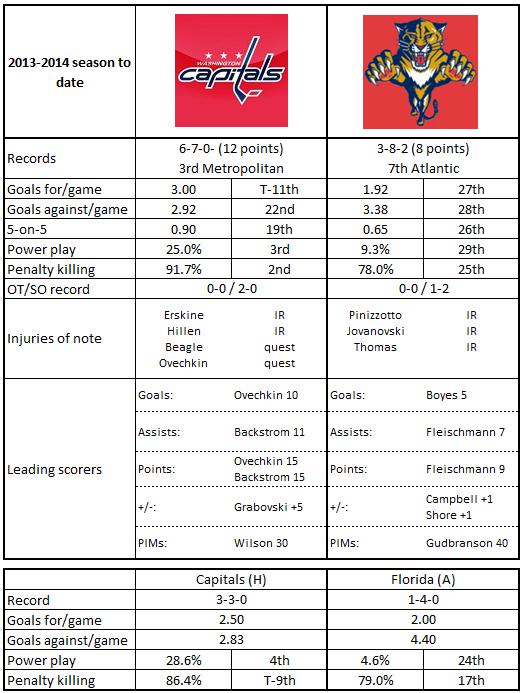 The once upon a time third overall pick (2010) from the Kingston Frontenacs would seem to be spoiling on the vine in Florida.  Two goals in 117 career games, minus-48 over that span.  In this population of defensemen, though, things are not all bad.  He has been on ice for “only” 16 goals against in 13 games (tied for 23rd fewest).  Among Panther defensemen, though, he has been on ice for only five goals scored by Florida, only four at even strength, the lowest number among defensemen playing in at least ten games.  He has one assist in ten games against the Caps over his career and is a minus-9.

Maybe it’s the name.  While the retooled top line was doing well last night – two goals and five assists from Nicklas Backstrom, Eric Fehr, and Martin Erat – and the third line was continuing to outperform their standing (three goals and six assists from Jason Chimera, Joeal Ward, and Mikhail Grabovski), the second line of Marcus Johansson, Brooks Laich, and Troy Brouwer managed one point, and that was a power play goal by Brouwer with assists to Backstrom and Mike Green.  Maybe it’s the name of the line.  From now on, they are “The Metropolitan Line.”

1.  Kill, Kill, Kill.  Florida has one power play goal in 22 tries on the road this season, that coming in Tampa against the Lightning back on October 10th.  The Panthers have had only one road game since, coming into tonight’s game, but still… This is team the Caps should extend their power play shutout streak against.

2.  Team, Team, Team.  It was a team effort last night in the absence of Alex Ovechkin.  If he cannot answer the bell tonight, the Caps might refresh their memories of six different players recording multi-point games against the Flyers.

3.  Focus, Focus, Focus.  First game back the day after wrapping up a long road trip?  Against a team whose record makes them utterly overlookable?  This has the peril of being one of those games of which we might say afterward, “you can’t expect to just throw your sticks on the ice and win.”  So, don’t.

This game should be over in the first 20 minutes.  We have an unsettled feeling that it won’t be, that the Caps will let the Panthers hang around and make a game of it into the third period.  They just won’t make a game of it for 60 minutes.

The Washington Capitals beat – and beat up – the Philadelphia Flyers, 7-0, on Friday night.  Seven goals, five fights, a hat trick, a four-point night, a shutout.  It was a full night.

It did not start that way.  In fact, it looked as if the Caps might spend the night missing their absent captain, Alex Ovechkin, desperately.  In the first 15 minutes of the game the Flyers outshot the Caps, 7-0.  It was the Caps, however, who would get the game’s first goal.  It started with a fine keep-in by Nate Schmidt, who used his right skate to deaden a bouncing puck that was heading out of the offensive zone.  Schmidt then fed Martin Erat, circling around the left wing faceoff circle to the middle of the ice.  Erat found Nicklas Backstrom at the top of the right wing circle, and Backstrom did the rest, one-timing the puck over the right shoulder of goalie Steve Mason.

After the first intermission the Caps proceeded to embarrass the Flyers with five goals in the second period.  Joel Ward started the onslaught by backhanding a loose puck under Mason at 1:24 of the period.  Eighty seconds later it was Jason Chimera splitting defensemen Erik Gustafsson and Kimmo Timonen at the Caps blue line to pick up a loose puck and take off on a breakaway, lifting the puck over Mason’s glove for a 2-0 lead.

The Chimera goal ended Mason’s night…well, his second period, but we’ll get to that.  Sixty five seconds after Chimera’s goal it was Backstrom again, flipping a shot that relief goalie Ray Emery was slow to react to, putting the Caps up, 4-0.

After things seemed to settle down, Joel Ward got his second of the game with 3:35 left when he outdueled Vincent Lecavalier for the puck at the left wing boards, left the puck for Chimera, then headed for the net.  Chimera returned the puck to Ward, who snapped it off the pipe and in for a 5-0 lead.  Troy Brouwer completed the second period barrage with a power play goal with 1:40 left in the period.

In the third period Joel Ward found the back of the net for his first career hat trick.  On a Caps power play, Mike Green started the scoring sequence feeding Eric Fehr for a shot attempt from the left wing circle.  Emery made the save, but Jason Chimera was first to the loose puck.  He backhanded a pass to the low slot where Ward banged it home to give the Caps a 7-0 lead.

That ended the hockey portion of the evening.

Eight seconds after the Ward goal, things took a turn.  Just after the faceoff following the Ward goal, Tom Wilson and Wayne Simmonds locked horns along the left wing boards.  That was the cue for Ray Emery to take off from his crease, race the length of the ice, and jump his counterpart, Braden Holtby.  Then it was Alexander Urbom and Brayden Schenn.  Then it was Steve Oleksy and Lecavalier.

By the time things were sorted out, the Caps received 50 minutes in penalties, the Flyers 64, Emery getting the extra 14 for leaving his crease and being an instigator, for which he was also assessed a game misconduct, ending his evening and returning Steve Mason to the nets.  It was thin gruel for a Flyers team thoroughly embarrassed on the ice by a team missing its captain and leading goal-scorer.

-- The third line took things into their own hands in this game.  Mikhail Grabovski, Joel Ward, and Jason Chimera combined for four goals and six assists.

-- Until Friday night, Jason Chimera did not have a three-point game since October 10, 2007, when he was skating for the Columbus Blue Jackets against the Phoenix Coyotes.  That happened to be only the third three-point night of his career.  With a goal and three assists, Chimera recorded the first four-point night of his career.  He is now fourth on the team in scoring (11 points) and is within three points of his total for all of last season (14).

-- Nicklas Backstrom had his first two-goal game since he recorded a pair in a 5-4 win over the Anaheim Ducks on November 1, 2001 2010.  He had the last-minute game-tying and the overtime game-winning goal in that game (folks might remember that as the Ovechkin-benched-in-the-last-minute game).

-- It was arguably the worst loss at home for the Flyers since they lost to the Caps, 8-2, in Peter Laviolette’s first game as head coach for the Flyers on December 5, 2009.  It was the biggest margin of victory by a visitor to Philadelphia in more than 40 years.  The last time the Flyers lost by seven or more goals on home ice was October 21, 1971, a 7-0 loss to the Los Angeles Kings at the Spectrum.

-- Everyone contributes in their own ways.  Michael Latta might not have joined in the scoring, but he won nine of 14 draws in 11 minutes of ice time.  And it was he who led Zac Rinaldo down the primrose path to a ten-minute misconduct.

-- This is what the Flyers are these days… Zac Rinaldo: the misconduct and a boarding penalty for 12 minutes in penalties.  He had less than nine minutes of ice time.

-- Lost in the process of burning out the goal lamp and the fisticuffs on the ice is the fact that Braden Holtby recorded the eighth shutout of his career and first this season.  In his last seven appearances he is 5-2-0, 2.08, .942, with one shutout.

-- Notes on the extracurriculars…

If any Caps fan has any problem with any player performance in this game, you’re probably the type who finds Santa Claus too jolly.  It was the kind of game that should make a Caps fan smile for a week.  Granted, it was against a team that can’t find the back of the net with a map and a flashlight, and it was a generally embarrassing performance in the last 40 minutes.  But the Caps forced a lot of that with a lot of players doing the kind of stepping up they needed when Alex Ovechkin went out of the lineup.

From top to bottom, all eighteen skaters and Braden Holtby played a role in this, some obvious, some not so much.  It was the kind of complete performance that had been absent through the first dozen games.  Just as good was the fact that the Caps finished up their road trip on a high-note and a 3-2-0 record that lifts them into third place in the Metropolitan Division.

It is something on which they can now build.