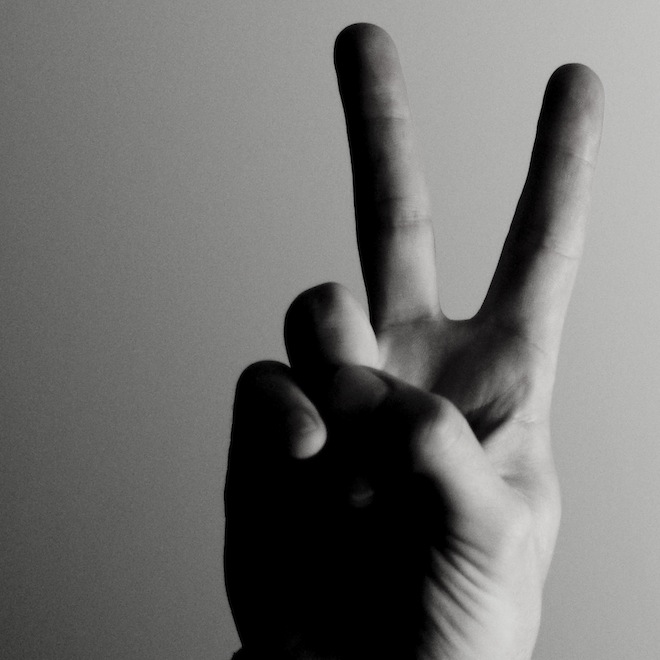 The Washington Capitals and Carolina Hurricanes faced one another 83 times since the Hurricanes moved to Raleigh in 1997, the Caps leading the all-time series, 44-25-7-7.  This season, however, it took until Game 24 of the season for the Caps to face their Southeast Division foes.  It would be a contest worth the wait, featuring multiple hat tricks and multiple fights, almost 80 total shots on goal, and some late controversy that had the final outcome in doubt even after the final horn had sounded.

Things got started quickly when former Capital Alexander Semin celebrated his first return to Verizon Center in a visitor’s uniform by scoring just 41 seconds into the game.  The scoring play began when Jay Harrison fired a shot at Caps goalie Michal Neuvirth.  He made the initial save, but did not control the rebound.  Eric Staal took a swing at it, but fired it into Neuvirth’s pads.  The puck bounced out to Neuivrth’s right where Semin was waiting to flip the puck over Neuvirth to put the Canes on the board.

Near the midway point of the period, Jason Chimera and Anthony Stewart got tangled up fighting for a puck along the wall.  The fighting for the puck became just a fight in short order with both players landing punches.  Although the fight might have been considered a draw, it seemed to change the momentum in the Caps’ direction.  Roman Hamrlik capitalized on the change in momentum in the 12th minute of the period.  Mike Ribeiro and Wojtek Wolski moved the puck back and forth along the wall.  When Carolina tried a two-man press on Wolski, the Caps winger slid the puck out to Hamrlik at the blue line.  Hamrlik sent a slap shot at the Carolina net that eluded goalie Cam Ward, who was screened on the play.

Carolina took the lead back early in the second period.  With Roman Hamrlik off for interference, Eric Staal found Jussi Jokinen from low in the right wing faceoff circle with a pass into the high slot between the Caps’ defense.  Jokinen one-timed the puck into the net before Neuvirth could react to the shot.

Not three minutes later, the Caps struck. Matt Hendricks took a shot from the left wing circle that hit Jay Beagle’s skate on the way through, the puck deflecting through Cam Ward’s pads.  Ward argued the goal, and the referees went to video review.  After a short pause, the goal was upheld, and the Caps had tied the game.

Carolina took their third lead of the game 11 minutes in when Alexander Semin scored his second goal of the contest.  It was a vintage Semin play that started when he walked out from the left wing wall, curled around Joel Ward, froze defenseman Dmitry Orlov with a faked shot, then took another step before wristing the puck on the long side past Neuvirth.

The second Semin goal might have restored some momentum for Carolina, but it was frittered away when Joe Corvo took a tripping penalty at 14:43.  Just 12 seconds later, Alex Ovechkin one-timed a pass from Mike Green past Ward’s blocker, and the game was tied at three apiece.  That is how things stood going into the second intermission, although there was some extracurricular activity late in the period when Beagle and Tuomo Ruutu dropped their gloves and were sent off for fighting.

Carolina made it three for three in early-period scoring when they took another lead in the fourth minute of the third period.  It was Alexander Semin again, this time snapping a rebound of a Jay Harrison shot past Neuvirth to complete the hat trick.

Not to be outdone, Alex Ovechkin knotted the game for a fourth time after Drayson Bowman was sent to the penalty box for tripping.  Ovechkin was on the receiving end of a give and go from the left wing corner, taking a pass from Nicklas Backstrom and finding a seam between Carolina defenders.  From the edge of the left wing circle Ovechkin caught Ward overplaying a shot to the long side and snapped a shot past Ward’s blocker and inside the near post to tie the game.

With just over two minutes left in regulation it would be Ovechkin one last time.  Inexplicably, he caught the Hurricanes napping on defense as the Caps were emerging from their zone.  It started when Michal Neuvirth left the puck behind his own net for Nicklas Backstrom who started out slowly toward the Carolina end.  As he reached his blue line he sent a pass up the middle to Ovechkin knifing between the Carolina defensemen.  Ovechkin took the pass in stride and skated in alone on Ward, where he snapped the puck over Ward’s glove to complete his own hat trick.

Ovechkin’s third goal gave the Caps their first lead of the contest, but the excitement was not over.  Carolina pulled Cam Ward with just over a minute remaining, and they succeeded in pinning the Caps in their own end with pressure.  Neuvirth was up to the challenge, but a shot from Joe Corvo with under ten seconds left started a flurry of events in front of the Caps goalie.  Corvo’s shot was deflected in front of Neuvirth and hit the post to his left.  The puck caromed over to Eric Staal who tried to one-time it past Neuvirth.  He did not get a solid connection, though, and the puck slid slowly toward the clot of bodies in front.  Jussi Jokinen took a swing at it, but not enough to get the puck cleanly past Neuvirth.  The trouble was, Neuvirth did not stop the puck cleanly, either.  Neuvirth reached back to try to cover it, but the puck slid over the goal line before he could get his catching glove on it and as the final horn sounded.

The call on the ice was a goal, but the referees skated to the phone immediately to confer with the war room in Toronto.  It was a lengthy delay, the fans in Verizon Center chanting “no goal” while the video was being reviewed.  Finally, referee Kelly Sutherland skated out and announced that the puck had indeed crossed the line completely but that it had not done so before the clock expired.  The Caps escaped with a 5-4 come-from-behind win. 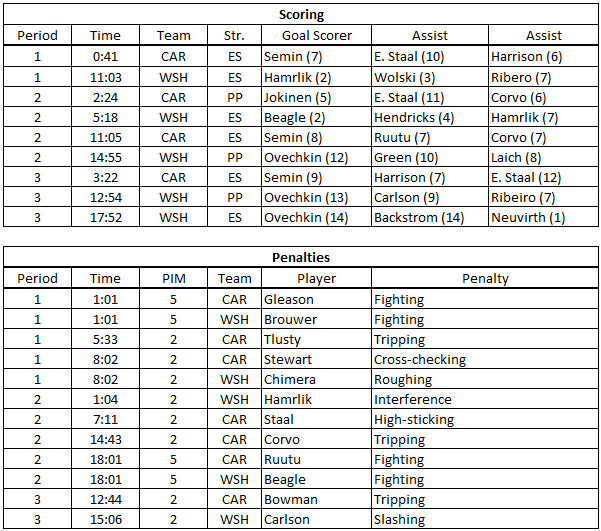 Posted by The Peerless at 4:37 AM No comments: