The Peerless Prognosticator is ON THE AIR!!! -- Game 4: Washington at New Jersey, January 25th

The Washington Capitals take their show on the road on Friday for the back half of a back-to-back set of games, visiting the New Jersey Devils at Prudential Center…”The Rock”…”The Newark Palace”…

I suppose you’re right, Fearless.  The Devils sold out their home opener this season in their only home game to date.  However, they ranked 24th in the NHL in attendance last season (22nd in capacity filled).  That for a team that would be a Stanley Cup finalist. And it is not as if this is a recent development.  The Devils have not ranked higher than 20th in attendance since moving to their new digs in 2007.

Too bad, too, because with their 3-0 win over the Philadelphia Flyers in their home opener the Devils are 127-65-14 at Prudential Center since it opened for hockey.  That includes a 31-17-4 home record last season, including playoff games.  Overall, the Devils didn’t look like a Stanley Cup contender for much of the 2011-2012 season – they finished fourth in the Atlantic Division and sixth in the Eastern Conference.  But the Atlantic was the toughest division in the NHL last season.  Four teams, including the Devils, finished in the top six in the East and all of them with more than 100 standings points.

The Devils also closed with a rush in the regular season, going 12-4-1 in their last 17 games, winning their last six contests.  And it just so happened that all four of their regulation losses in those last 17 games were against Atlantic Division opponents (they were 7-0-1 outside of the Atlantic).

The Devils have a well-earned reputation for defensive prowess, but they are not completely offensively challenged.  New Jersey had three 30-goal scorers last season.  Their problem is that one of them (Zach Parise) took the money and ran to Minnesota, another one of them (David Clarkson) might owe much of his production to the guy who now stands behind the Capitals’ bench, and the other is Russian (Ilya Kovalchuk)…it’s an “enigmatic” thing.

In fact, of the Devils’  top five goal scorers from last season, accounting for 145 of the team’s 216 goals, two of them – Parise and Petr Sykora (and their combined 52 goals) are no longer with the club.  With Patrik Elias (and his 26 goals last year) having turned a year older at 36, and Adam Henrique is 7-10 days away from returning to the lineup after thumb surgery, where is the scoring coming from?

One thing that having a volume of high goal scorers last season did was allow the defense to be involved in the scoring for the Devils.  It was not so much goal scoring (only Mark Fayne had more than two goals, and he led the group with only four), but four defensemen had at least ten points with Marek Zidlicky adding eight more in only 22 games after arriving in trade from Minnesota.  So far this season the Devils’ blue line has a total of only three points (all assists), but they must be doing something right at the other end since the team has allowed only one goal in 120 minutes of hockey so far. 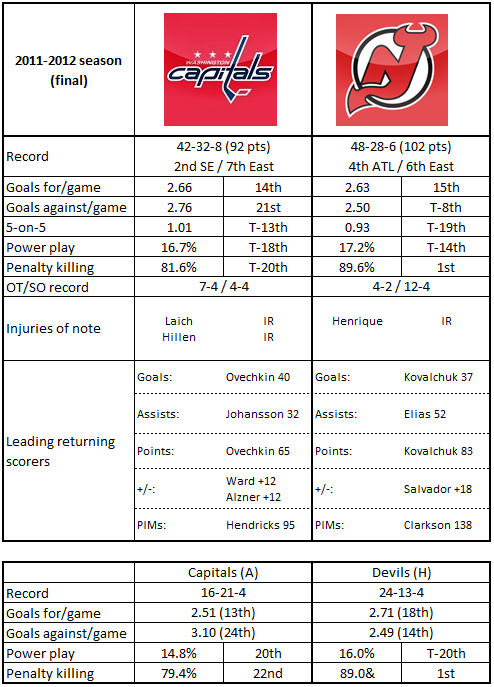 2.  Ilya Kovalchuk has a goal in two games.  This not news.  That his goal is a shorthanded one might be.  Except that he did have three shorties last season (doubling at the time his career total).  Some goal scorers, it seems, can be made dangerous on the penalty kill.  And it is not as if the Devils’ penalty kill suffered much last season.  They led the NHL in penalty killing.

3.  We noted that David Clarkson might have owed much of his goal scoring improvement to his former assistant coach, Adam Oates.  Maybe the advice stuck.  He has two goals in two games.  And it has not tamed his feistiness.  He has one of the NHL’s 25 fights so far this season (before Thursday night’s games), a third-period bout against Wayne Simmonds of the Flyers in the Devils’ 3-0 win over Philadelphia on Tuesday.

5.  Perhaps going hand-in-glove with the last item, the Devils had the second-best winning percentage in one-goal games last year.  Teams might score on them first, but they did not often seem to get much more.

1. The Caps have 92 wins over the Devils in franchise history.  That is more wins than over any of the other 31 franchises they have played against except the New York Rangers (93 wins).

2.  Coming into this game the Caps are the only team without a standings point.  This the longest they have gone into a season without having earned a standings point since starting the season with six straight losses in the 1993-1994 season.  The Caps did finish that season 39-29-10 for a record of 39-35-10, third in the Atlantic Division on their way to their only playoff series win over the Pittsburgh Penguins.

3.  Alex Ovechkin has now gone three games without a goal, his longest drought to start a season in his career.  He is tied for 194th in points with one.  But it’s early…right?

5.  OK, so who is it going to be in goal? Michal Neuvirth allowed four goals on 22 shots last night against Montreal, but he is 4-1-2, 1.96, .930 with one shutout in seven career appearances against the Devils.  Meanwhile, Braden Holtby has but one career appearance against New Jersey, allowing five goals on 23 shots in a 5-0 loss to the Devils in New Jersey on November 22, 2010.  He was sent down to Hershey following that game.  It might be worth noting that since that game against the Devils, Holtby is 12-4-2, 2.01, .934 with three shutouts in 18 regular season appearances.

The old man just keeps going, it seems.  Yes, he might be the beneficiary of good play in front of him (see the discussion of shots allowed above), but he is still the one having to stop those shots, too.  The Caps have those 94 wins in 186 regular season games, all-time, against the Devils, but they have won only 17 of 68 decisions against Brodeur.  However, he is 1-5-0 in his last six decisions against the Caps with a 4.03 goals against average and a .841 save percentage.  He has not beaten the Caps in regulation since earning a 5-2 decision in Washington on November 14, 2009.  Maybe it’s a “red” thing…

“I was screened a bit [on John Carlson’s goal in an October 2010 contest], but it was far out. I should have had a better look at it. I just kind of lost it a sea of red there… any time they shot the puck high it was a big adventure out there because we’re not used to playing in a building like that.”

Mathieu Perreault was unhappy with his playing time in the Caps’ first two game, skating a total of 8:50 in ice time.  He voiced his displeasure and had a talk with head coach and general manager after the loss to Winnipeg on Tuesday.  He was in the starting lineup against the Montreal Canadiens on Thursday on a line with Joel Ward and Jason Chimera, and given more ice (12:15).  It did not make much of a difference for the Caps – they lost, 4-1 – or for Perreault, who finished minus-1 with a penalty in those 12-plus minutes.  He did have three shot attempts (more than Mike Ribeiro and only one fewer than Nicklas Backstrom) and won six of nine faceoffs.  Is this the beginning of a longer look at Perreault?  It couldn’t hurt at the moment.

1.  Be possessed of…possession.  The Caps have six goals so far this season, none of them by a first line player (although Matt Hendricks did score one while playing along side Nicklas Backstrom and Alex Ovechkin).  It is tough to score without the puck.  In two games so far the Caps are 29-for-61 on offensive zone faceoffs (47.5%), Backstrom is 10-for-25 (40.0%).  If the first line is wasting 10-15 seconds trying to recover possession of the puck, it eats up a lot of their shift.  New Jersey is 28th in faceoffs so far. Yes, it is only two games, but they were 29th in draws last year, too.

2.  Five by Five at Five on Five.  The term “five by five” applies to the quality of communication.  So far, precious little of it seems to be of much quality on the ice at five-on-five.  Through their first three games the Caps had four even strength goals on 72 shots (5.6 percent).  They have been outscored 7-4 at even strength so far.  Penalty killing has to improve, but this even strength performance will have to improve, too.

3.   Start fast.  New Jersey has not scored a lot of goals in the first period – only two in two games, in fact.  But they have allowed none.  They have not allowed any goals in the second period, either.  They are one of four teams that has not trailed at either intermission this season.  Make them show what they can do when they have to play catch-up.

In the end, let’s face it.  Right now, the Caps stink.  Outscored 14-6, 61.1 percent on the power play, a top line that does not yet have a goal. That is, unless you count Wojtek Wolski, who played on the top line Thursday, but recorded his goal while on the second line; or Matt Hendricks, who isn’t a first liner, but got his goal when he took a turn on that line.  The Caps have six goals on 95 shots – a 6.3 percent shooting percentage.  The Caps can’t kill penalties, and they can’t shoot straight.  Small wonder that they haven’t even made games close, the three decisions being of two goals and twice by three goals.  And now they get a team that can kill penalties (90 percent so far) and can shoot straight enough to win.  What could go wrong? 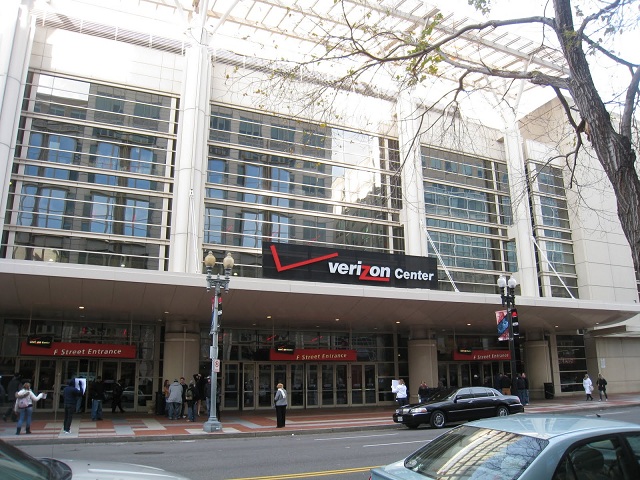 Welcome to Verizon Center, the Lourdes of F Street, where NHL teams from all over North America come for the healing ice.  Where the lame and the infirm are healed, where power plays are raised, where losing streaks are turned miraculously into wins.

Last night the Montreal Canadiens took of the healing ice and skated away with a 4-1 win over the Washington Capitals, getting two power play goals in the space of 54 seconds on their way to a four-goal second period.  End of game.

The Caps are now the only team in the NHL without a standings point.

The Caps are now dead last in the NHL.

There is nowhere to go but up...