In looking at five questions about the 2015-2016 edition of the Washington Capitals, we turn to a sometimes overlooked part of the club…the bottom six forwards. 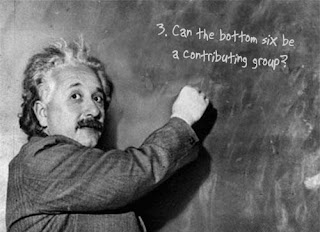 A lot of attention has been paid to the additions the Washington Capitals made to bolster the right side of their top-six forwards – T.J. Oshie and Justin Williams. However, the Caps did lose Joel Ward and Eric Fehr in free agency this past summer, and it raises the question of what the bottom six forwards will look like and whether they can be a contributing force in the season ahead.

It was an unsettled enough function that the Caps held what amounted to a casting call during the preseason.  Derek Roy, a player with almost 800 games of regular season and playoff experience, was brought to camp on a professional try out.  Sean Collins, who played parts (small ones) of three seasons with the Columbus Blue Jackets, was signed as a free agent in July and given a long look in training camp. Chris Bourque was signed to a contract in July for what would be his third tour with the organization.  Liam O’Brien, who surprised many by making the Caps roster for Opening Night in 2014-2015, was in camp competing for a spot.  Chandler Stephenson, a 2012 draft pick and with barely a season at Hershey, went deep into training camp.  Chris Brown, who appeared in five games with the club last season, was making his way through camp until a hand injury set him back for what is expected to be several weeks.  Stanislav Galiev, a 2010 third-round draft pick who appeared in his first two NHL games late last season, was getting a shot to make the club on a permanent basis.

This was in addition to returnees Jay Beagle, Michael Latta,  who might be expected to get third or fourth line minutes, and Brooks Laich and Jason Chimera, who might at one time gotten second line minutes but are likely to find homes on one of the bottom two lines.

Then there is the matter of the depth the Caps have at scoring line forward.  There are seven players fighting for six spots.  Suffice it to say that it would seem likely that when Nicklas Backstrom returns to the lineup, then one of Marcus Johansson or Andre Burakovsky is going to be on the third line.

As we write this, Roy has been released from his try out.  Of the others, O’Brien, Bourque, and Stephenson will start the year in Hershey.  Brown is injured and will be out for some time yet.  This leaves Collins and Galiev as the 13th and 14th forwards for the moment, although with Backstrom still out for at least the first four games, one of them appears slotted to get a sweater for Opening Night.

Compare last season’s bottom six to what might be this season’s group, once the Caps are healthy at forward (for purposes of discussion...no lines are ever permanent):

A third line of Brooks Laich (or Jason Chimera; they might be interchangeable at this point), Andre Burakovsky, and Tom Wilson would be something of a departure from a conventional checking/shut-down line pitted against, where possible, an opponent’s top line.  It would be a third scoring line, potentially.  The difficulty, at first blush, is that Burakovsky would have spent so little time with any of these three players at 5-on-5 last season (combined, about 112 minutes).  And while Burakovsky’s Corsi-for with Laich and Wilson were more than adequate (56.8 percent and 60.9 percent, respectively; numbers from stats.hockeyanalysis.com), there is too little experience there to draw much in the way of conclusions.

There is an odd upside to a line such as this, though.  Both Burakovsky and Wilson are at the beginning of their respective development curves.  The best that might be said for such a line is that it could be better late than it is early.  They could start the season as the youngest players on the roster (20 and 21 years old, respectively).  There is room for improvement, room for them to grow together.  This applies perhaps more to Wilson, who has not yet demonstrated that he can be a contributor in the offensive end of the rink.  The improvement angle would be the optimistic view for this line.

Then there is Laich, should he get the nod to take the left side of such a line.  If there is a player who has something to prove this season, it might be Laich.  Hounded by injuries the last three seasons, he is very much removed from the solid even strength and power play contributor he was five or six years ago.  He has as many goals over the last three seasons combined (16) as he recorded in 2011-2012.  While he remains versatile, capable of playing any of the three forward positions, he needs to demonstrate productivity.

For Jason Chimera, his motivation is a bit more straightforward.  He is in the second year of a two-year deal with the Caps and is looking at unrestricted free agency at the end of the season.  A productive campaign would add to his earning potential in what could be his last NHL contract (he could be the oldest skater on the team this season at age 35).

Laich and Chimera being suited for either the third or fourth line on the left side brings us to the other two positions on the fourth line.  Jay Beagle will eventually center this line, in all likelihood, once Nicklas Backstrom returns as the top line center and moves everyone else down a rung on the ladder.  He is coming off a career year of offense (10-10-20), is a superior faceoff performer (54.7 percent in 254 career games), and he has a new contract to show for it (three years/$5.25 million).  Those are the kinds of things that can lead to a letdown if the player gets caught up in trying to do too much to maintain the career best production and/or justify the contract.

On the right side of this line could be Michael Latta.  There really isn’t a delicate way to say this, but Latta is something of a liability in the offensive end.  He has one goal on 30 shots in 70 games.  No forward played in 70 or more games and took 30 or fewer shots except for Latta.  He does try to contribute in other ways, mostly as an “energy” player (the sort who annoys and agitates, and who can and will drop the gloves when circumstances dictate).

In Beagle and Latta, the Caps have something akin to the days when Boyd Gordon and Matt Bradley played for the club.  Gordon was a very good defensive player and was adept in the faceoff circle, Bradley was a heart-and-soul guy who led with his chin (and other parts of his face) on a lot of nights.  Beagle is perhaps a better offensive player than Gordon, who has never had a 10-goal season (but he does have three 20-plus point years), while Latta is not as competent as Bradley in the offensive zone (37 goals in 427 games with the Caps).

If, however, the third line is going to be as much, if not more of a scoring line than one might associate with a third line, then the fourth line might be expected to pick up more of the defensive burden as opposed to being merely an “energy” line.  This might argue more for Laich playing on this line, he being a superior possession player and probably a better pure defender than Chimera.

This is the point where we bring up the depth forwards.  To start the season it would appear as if those spots would go to Sean Collins and Stanislav Galiev.  Neither player has much in the way of NHL experience (Collins has 19 games over three seasons, Galiev had two games last year).  And they arrive at their roster spots from very different directions in training camp.  Of Collins, head coach Barry Trotz likened him to departed winger Joel Ward and said:

“He’s not a big body. He’s not going to blow you away with blazing speed or these fantastic hands or anything, but if you watch him closely, he will make you like him as a coach, because he does a lot of those things that are hard to do all the time.”

On the other hand, Trotz was not as sanguine about Galiev’s progress and situation with the club before the team’s last two preseason games:

“There’s no question, he hasn’t stood out right now at all to me.  He’s got to play better... We’re pretty well out of time. We’ll make a decision on him very shortly.”

The decision, for now, appears to keep him in Washington, but his stay might be limited to how long Nicklas Backstrom is on the shelf.

The third and fourth lines are, and will be an issue as the season gets underway.  The Caps are dealing with a retooled third line and an uncertain fourth line.  One can see a path for each improving over the course of the season in what might be unconventional roles.  On the other hand, one can just as easily see either (or both) being a substantial drag on the Caps’ performance.  This is a question that is not going to be answered in a week, in a month, or even by New Years.  It had better have an answer by the spring, though, of all this talk of the Caps going deep in the postseason might be just that.

Teams in the National Hockey League seem to be wedded to the idea of bestowing the player of the game a symbol of his effort and achievement when the club finishes a win and repairs to the friendly confines of the locker room.  In years past, the Capitals have used the hard hat... 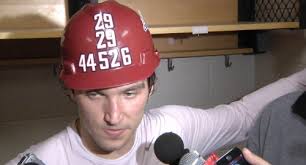 And, they have employed the "Honest Abe" stove pipe hat and beard as a fitting symbol... 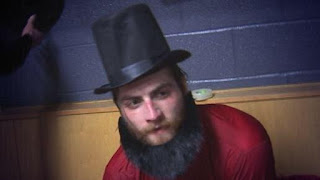 As the 2015-2016 season is about to begin, let us humbly offer a suggestion for this season.  A chunk of granite, the unpretentious rock... 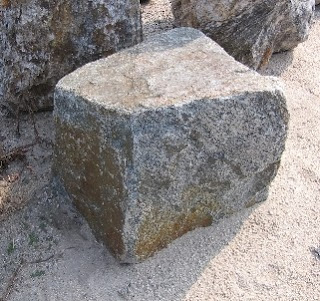 Why?  Well, it's simple, really.  To recognize one as being solid as a rock, of being rock hard in the face of opposition.  To distinguish one as being strong and impermeable, the rock on which victory is built.  To be steady as a rock, hard as a rock.  To put opponents between a rock and a hard place.

For years, Caps fans have been "rocking the red."  Now is the time to pay honor to the rock by using it to honor the player of the game.  Who knows, it might come in handy when Caps fans are "rockin' 'til the break of dawn," should the team win the prize they all covet next spring.
Posted by The Peerless at 11:11 AM 2 comments: