The Peerless Prognosticator is ON THE AIR!!! -- Game 24: Capitals at Rangers, November 20th

The Washington Capitals head to the Big Apple on Wednesday night in a nationally-televised matchup with the New York Rangers at Madison Square Garden.  The contest will feature teams on different paths.  The Caps, a bona fide Stanley Cup contender, are 13-1-2 in their last 16 games and have the best road record in the league (10-1-1).  The Rangers are in the midst of a rebuild and a record that reflects it, tied for fewest standings points in the Metropolitan Division (18, with New Jersey and Columbus).  They have alternated wins and losses over their last eight contests on home ice (4-2-2). 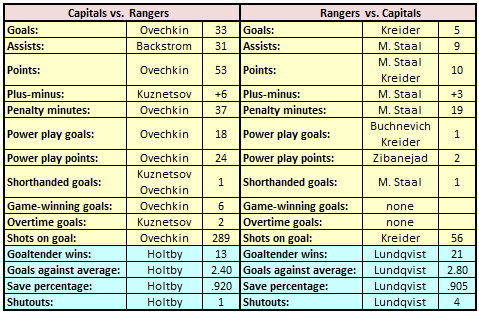 Look at that table of active leaders among the Rangers against the Caps.  It says something that so many current “active” Rangers have made such a small dent in the statistics against the Capitals, a reflection of a team rebuilding.  Players like Brandon Dubinsky, Ryan Callahan, Ryan McDonagh, Derek Stepan, and Mats Zuccarello, who would be noted in that table, are gone.  But that doesn’t mean the Rangers are without star power or are incapable of still making a splash in free agency.  They signed one of, if not the biggest prize in the unrestricted free agent market last summer in Artemi Panarin.  It was a huge contract to which Panarin was signed -- $81.5 million over seven years, his $11.6 million annual cap hit second in the league only to Connor McDavid ($12.5 million).
The burden seems not to have weighed Panarin down too much; his nine goals in 18 games lead the team, as do his 23 points.  It is the fastest goal-scoring start of his five-year career, putting his career best of 31 goals with Chicago in 2016-2017 in jeopardy.  His goal scoring has come as a product of higher shot volumes (3.17 per game is a career high) and efficiency (15.8 percent is his highest since he was 16.0 percent in his rookie year).  The problem for the Rangers, though, is it has not been enough.  In the nine games in which he has a goal, the Rangers are just 5-4-0.  But not getting his contributions proves a bigger problem, the Blueshirts going 3-4-2 in the nine games in which he does not have a goal.  His ability to set up other might matter more.  New York is 7-3-1 in ten games in which he has at least one assist, 1-5-1 in the seven games he does not have a helper.  In 13 career games against the Caps, Panarin is 6-4-10, plus-3.

If Artemi Panarin’s goal scoring is not a surprise, perhaps Filip Chytil’s is.  A 21st overall pick in the 2017 draft, the 20-year old center is already fifth in his draft class in games played (93) and fourth in goals scored (18).  He has six goals in only nine games so far this season, tied for second on the club and is more than half way to topping the 11 goals he scored last season, his “rookie” season (he played nine games in 2017-2018).  The odd fact in his limited action to date is another reflection of a team still growing.  Chytil’s only two-goal game this season came on the road in a tough venue, Amalie Arena in Tampa against the Lightning last Thursday.  But they came in the third period of a game that was 8-1 in favor of the Lightning through two periods.  The Rangers lost, 9-3.  You would have to think a correction was in order, though.  Chytil’s six goals come on 17 shots, a 35.3 shooting percentage.  Since shots on goal and shooting percentage became league statistics in 1959-1960, only three players finished a season with more than 100 shots and a shooting percentage over 30 percent, and the most recent of them (Craig Simpson, who shot 31.6 percent on 177 shots) did it more than 30 years ago, in 1987-1988.  Chytil is 0-2-2, minus-1, in six career games against the Caps.

When Marc Staal broke into the NHL in 2007-2008, the defenseman skated with future Hall of Famers Jaromir Jagr (well, soon) and Brendan Shanahan.  Now, he skates on a defensive squad in which six of the other seven defensemen to have dressed this season are 25 years old or younger.  At 32 years of age, he is the oldest member of the blue line, fourth in team history in games played by defensemen.  But he was a healthy scratch in three games ending October and beginning in November, and now he is out following ankle surgery to address an infection.  That leaves the “veteran” duties on the blue line to Brendan Smith.  It is a difficult situation in which Smith finds himself, a player of modest achievements in his nine year career, parts of four spent with the Rangers.
Smith’s role might be seen as one similar to a defenseman such Jamie Heward, who played in 123 games for the Caps in the first two seasons coming out of the 2004-2005 lockout, when the club was rebuilding and integrating young stars into the lineup.  A veteran presence such as that can provide some stability and instruction even as a team struggles to find its way.  Smith will not wow anyone with numbers; despite being a 27th overall draft pick (Detroit, 2007), he has only seven goals and 29 points in 149 games as a Ranger.  And this season, he has logged more than ten minutes of ice time only 11 times in 18 games.  Watching him is the sort of thing more devout hockey fans might appreciate.  He will not be a big numbers driver, and he seems unlikely to be a player that will be on this roster when the Rangers return to competitiveness.  But his is an important role to fill for a team that is working toward reaching that competitive level once more, that of the stable veteran influence.  It is a role that should be appreciated.  Smith is 0-4-4, even, in 17 career games against Washington. 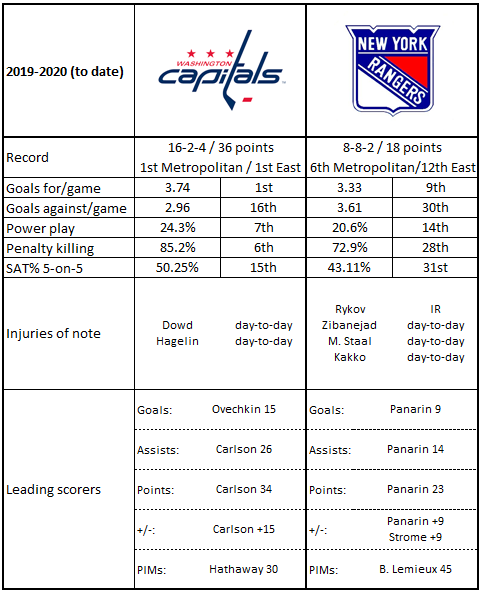 1.  The Rangers have the second-worst shots-per-game differential in the league (minus-6.8); only Chicago is worse (minus-7.1).

4.  Eight defensemen have dressed for the Rangers this season; seven have goals.  Libor Hajek, despite dressing for all 18 games, has yet to light the lamp.

1.  Despite the Caps exceptional road record, they are still lagging in shot attempts.  Their shot attempts-for percentage at 5-on-5 (48.88) ranks just 16th on the road.

2.  That shot attempts ranking might be a reason why the Caps have allowed the fourth-highest number of shots in road games this season (385, tied with Dallas, both teams playing 12 road games).

3.  Washington has more power play goals on the road (11) than any other team in the league.

4.  Only Vegas has more shorthanded goals scored on the road (four) than the Caps through Monday (three).

5.  No team has more empty net goals scored on the road through Monday than the Caps (three, tied with St. Louis).  These Caps…they score a lot of different ways on the road.

We are inching toward the end of one of the great goaltending careers in NHL history.  Henrik Lundqvist owns or is close to owning every meaningful record in team history: games (868/first), wins (453/first), goals against average (2.42, second among goalies with at least 200 games, and Dave Kerr (2.07) last played in 1941), save percentage (.918, first among goalies with at least 100 games), and shutouts (63/first).  But now he is more or less splitting time with 23-year old Alexandar Georgiev, taking ten starts to eight for Georgiev.  Lundqvist and Georgiev have identical 4-4-1 records, Georgiev having the edge in goals against average (3.22 to 3.54 for Lundqvist) and save percentage (.906 to .905 for Lundqvist).

If there has been a disturbing development in Lundqvist’s game it is that five times in his ten starts he had a save percentage under .900.  Unsuprisingly, the Rangers could not score their way out of such difficulties and have a 0-4-1 record in those five games (Lundqvist had a no-decision in a loss to Boston).  Lundqvist has been slipping slowly, but inexorably, for a few years now, paralleling the fortunes of the team in front of him.  After posting seven consecutive seasons with a save percentage of .920 or better, he has not been above .915 in any of the last four seasons.  After posting goals against averages under 2.50 in each of his first 11 seasons, he has not been below 2.74 in any of the last four seasons, and his 3.54 goals against average so far this season is almost half a goal worse than his next worst GAA, 3.07 set last year.  Lundqvist is 21-13-7, 2.80, .905, with four shutouts in 41 career games against the Caps.

As if John Carlson needs a big stage at the moment, given the historic start to his season, he will get one in New York on Wednesday.  He has to be considered the favorite among Norris Trophy candidates as the schedule passes the one-quarter mark.  Among defensemen, he is second in goals (eight, to Dougie Hamilton’s nine), first in assists (26, nine more than Cale Makar), first in points (34, 12 more than Makar), first in plus-minus (plus-15, two better than Brian Dumoulin and Zdeno Chara), first in points per game (1.48, to 1.10 for Makar and Hamilton), first in even strength points (23, to 14 for Ryan Ellis), tied for first in power play points (11, with three other defensemen), and tied for first in shots on goal (66, with Roman Josi).  He has points in 19 games this season, more than any other defenseman (Hamilton has points in 16 games).

And, if you think Carlson’s numbers this season are not Norris-worthy, his career to date has an almost bizarre parallel with a defenseman who has won a Norris Trophy, 2017-2018 winner Victor Hedman.  Consider:

One might consider Carlson among, if not the most underrated defenseman, certainly on the offensive side of the puck, of his generation.  Carlson is 5-20-25, minus-1, in 34 career games against the Rangers.

The Caps are a contender; the Rangers are a rebuilder.  Frankly, that is where the analysis might end.  But hockey is played on an ice sheet, not a spreadsheet, and a nationally-televised game in The World’s Most Famous Arena is always a challenge for a visitor.  But this Capitals team has met almost every challenge thrown at it on the road this season, and this should prove no different.