The Peerless Prognosticator is ON THE AIR!!! -- Caps at Senators, December 19th

Now, the Caps head to Ottawa looking to use a tough loss as a foothold to start climbing back through the standings after falling out of the top spot in the Southeast and finding themselves in seventh place in the Eastern Conference. The last time we saw these teams on the same ice, Alex Ovechkin was wristing a puck through the legs of Senator goalie Pascal Leclaire with 31.1 seconds left in overtime, giving the Caps a 3-2 win. It was Ovechkin’s second straight game with a goal, the second in a row that was a game-winner. That was in the third game of the season. He has nine goals in 31 games since then, a 24-goal season pace.

That the Caps are having a lousy December isn’t exactly news at this point. But Ottawa hasn’t been lighting up the win column, either. The Senators are 3-3-3 for the month to date and have managed to score more than three goals only once in nine tries – an overtime loss as it turns out (6-5 to Colorado on Friday). Ottawa has been in the taking with one hand while giving back with the other mode. In December the Senators are 6-for-22 on the power play (27.3 percent) but have killed off only 19 of 26 shorthanded situations (73.1 percent) to end up a minus-1 in the exchange.  The overall numbers look like this: 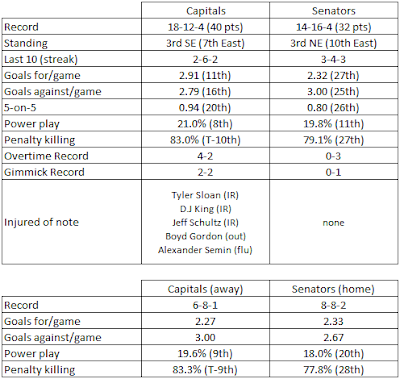 What Ottawa is, though, is one of only two teams in the Eastern Conference to have lost only one game in regulation to a Southeast Division team (a 7-1 loss to Carolina on November 17th). Not that the Senators have had a lot of games against the Southeast so far (3-1-2 overall); they have played only one Southeast club since that loss to Carolina in November (a 4-3 overtime loss to Atlanta last Monday).

Ottawa has struggled to score goals this season. They are 27th in the league in scoring and have only one player with more than ten goals and more than 20 points. That would be the same player – Daniel Alfredsson. But it is a measure of the Senators’ scoring difficulties that Alfredsson could lead the team in scoring with what would be his lowest point total in any season he played in at least 60 games. He is on a pace to score 53 points. However, he has a goal in each of his last three games, which follows a stretch in which he went without a point in ten consecutive games.

Ottawa has cast their lot with two Russians on the far side of their respective careers, and neither is performing up to expectations. Alex Kovalev scored 61 goals in his last two seasons in Montreal, and it served to provide him a two-year, $10 million deal with the Senators in July 2009. He slumped to 18 goals and 49 points in 77 games last year, his first under the deal. This season he is 7-9-16, minus-8 (an 18-22-40, minus-19 pace). He has spent time on the fourth line recently (he had barely ten minutes of ice time last time out), has accused his coach of using him as a scapegoat, and is now being mentioned in trade rumors, with St. Louis a possible destination. He scored his last goal on November 27th, a game winner against Toronto, and has only two points since that game while going minus-5.

Meanwhile, Sergei Gonchar signed a three-year, $16.5 million deal last summer to move from Pittsburgh to Ottawa. Until this season Gonchar averaged 17-40-57, plus-4 per 82 games in his career with Washington, Boston, and the Penguins. This year he is 4-12-16 (a 10-29-39 pace) and is a minus-19 (a minus-46 pace). Only two defensemen in the league have a worse plus-minus (the Islanders’ James Wisniewski and New Jersey’s Andy Greene, both at minus-21). Gonchar, an offensive defenseman, hasn’t posted a goal since November 11th and has only a pair of assists since November 22nd. He hasn’t had a “plus” game since going plus-1 in a 3-2 Senators win over Los Angeles on November 22nd. That was 14 games ago.

In goal, coach Cory Clouston has alternated Pascal Leclaire and Brian Elliott over the last six games, and if he continues to do so Leclaire will get the start tonight. Leclaire has won three of his last four decisions (3-1-0, 1.77, .939). He has not played badly this season, allowing more than three goals in only three of 12 decisions, only once since November 11th (nine appearances and eight decisions).

Tomas Fleischmann is scoring goals at a 50-goal pace as a member of the Colorado Avalanche. The Caps haven’t won a game since Scott Hannan came back in the trade that sent Fleischmann to Colorado. There is no connection. That Fleischmann is scoring like the second coming of Joe Sakic doesn’t mean he was going to do it in Washington, now or ever. That the Caps haven’t won a game since Hannan arrived is a product of scoring less often than the A/V guy in high school over the last eight games. Hannan, it bears noting, is not here for offense. But he is here for defense, and he has been on the ice for ten of the 27 goals allowed in the eight-game losing streak.

1. Look Sharp. Game starts at 7:30. No waiting until 8:30 to decide to play.
2. Feel sharp. Have a winning attitude; you’ve done this before…winning that is.
3. Be sharp. Semyon Varlamov would seem likely to get this start and will have a chance to redeem his performance on Sundays. Goalies often have to be the “stopper” (in the baseball sense of a pitcher being the key to ending a losing streak). Varlamov has to “be sharp” to play that role.

In the end, the streak has to end sometime. HBO needs a new narrative for their series. The big guys break out would be a good one…

In 1969 Elizabeth Kubler-Ross introduced the five stages of grief to the psychiatric literature. After tonight’s 3-2 loss to the Boston Bruins, we might have an equivalent for those followers of the Washington Capitals…

Denial… The Caps aren’t that bad, even with a seven-game losing streak. They’re this close to breaking out.

Anger… #@$%! Three-f’n-nuthin’ after one #@!$in’ period??? One on a puck that crawled over the line (where was Ryan Getzlaf to sweep it away from the goal line?), another from a guy who hadn’t scored a goal since Millard Fillmore was President (and after his first shot was blocked…right back onto his $@#%in’ stick!), the last one from a player “having his best period as a Bruin.”

Bargaining… Maybe if they can just make it close, it’ll seem like a win, and we can go from there…

Depression… Geez, the first line gets 17 shots on goal almost as many as the Bruins had for the whole $@#%in’ game! – and NO goals??

Acceptance… Seventh place. Seventh place in the East. Third in the Southeast. Six points ahead of ninth-place Carolina, and they have three games in hand.  We're back in 2007.

-- Matt Bradley and Karl Alzner were the goal scorers. That’s not primary scoring, that’s not secondary scoring. There isn’t an “ary” to cover this scenario when a fourth liner and a guy with two career goals on 83 career shots coming into the game are the offense.

-- Nicklas Backstrom had six hits, six shots on goal, and won 14 of 20 draws. Never have so many numbers looked so good in service to so little production. He is now 0-4-4, minus-5 during the eight-game skid.

-- Mike Green is up there in the lots of numbers to no end sweepstakes…three shots on goal (seven attempts), four hits, two blocked shots… and a minus-2.

-- The fourth line was the best group for the Caps, and that is something we say entirely too much these days. Matt Bradley gets a goal, had a fight, and throws three hits in less than nine minutes of work. Matt Hendricks gets an assist, and Jay Beagle wins four of six draws, gets a hit and three blocked shots.

-- Michal Neuvirth did not have a period for the ages to start the game, but without his stop on a Tyler Seguin breakaway this game doesn’t become a game later. It becomes a mad dash to see what’s on other channels.

-- 3.6 percent. That is the Caps’ shooting percentage on this eight-game skid. The Caps are averaging almost 38 shots a game, 1.4 goals.

-- Speaking of shots… 7:56. That was the time elapsed before the Caps were credited with a shot on goal. The Bruins had five of their own at the time. The Caps were outshot, 11-5 for the period, outscored 3-0.

In the end, we are getting to a point where the situation cannot be repaired without a major change. And folks know what that means. There are a lot of instances in which a coach is relieved and the players lament that it is their fault, that so-and-so was a good guy, a good coach, but they just didn’t perform. Well, yeah. And this is now on the players. They seem to like Bruce Boudreau and enjoy playing for him. But they aren’t performing. The guys who get the ink aren’t performing, the guys the team depends on for support aren’t supporting. The Caps haven’t put together a complete game in almost a month, probably not since the 6-0 win over Tampa Bay on the day after Thanksgiving. And if the players don’t change their performance level – quickly – there are other changes that will become more likely.

You can’t just talk a good game. Fans tune out spiffy quotes on what’s wrong and what one needs to do to turn things around just as a coach’s efforts to get those things turned around get tuned out by players. And right now there is nothing but static, just a lot of noise signifying nothing. Which is what the Caps have to show for December.

Email ThisBlogThis!Share to TwitterShare to FacebookShare to Pinterest
Labels: 2010-2011 capitals postgame, Boston Bruins, that was the week that was, the peerless prognosticator
Newer Posts Older Posts Home
Subscribe to: Posts (Atom)