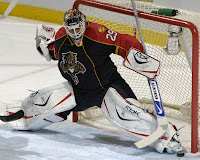 Tomas Vokoun
Theme: "There comes a time when all the cosmic tumblers have clicked into place, and the universe opens itself up for a few seconds to show you what's possible."
-- Terence Mann (from “Field of Dreams”)

You’ve played 36,082 minutes as an NHL goaltender. Only 31 goaltenders in the history of the league have played more. Among those 31 goaltenders ahead are names such as Richter, Smith, Khabibulin, Osgood, Hasek, Barrasso, Vernon. Names that have in common their having been engraved on the Stanley Cup. Meanwhile, you’ve toiled those minutes compiling records like 12-18-4, 13-17-5, 23-28-11. Your lot has been to be the iron man, recognized as one of the best goalies in the game averaging 62 appearances a year for largely mediocre teams. You have a total of 679 minutes in playoff competition over a career that has spanned 13 seasons. Two playoff series, one over in five games, the other in six.

And then, the cosmic tumblers click into place, opening up the universe for a few seconds to show you what’s possible. Those tumblers clicking into place are the 30 positions for starting goaltenders in the National Hockey League, and in doing so, a lot of those positions – especially those on teams with Stanley Cup aspirations – are filled. But in Washington there is a team still green in goal and guilty of perennial disappointment to their management, their fans, and themselves.

In those few figurative seconds, Tomas Vokoun signed a one-year/$1.5 million contract with the Capitals, the thought being (as his agent put it), “He’s been on teams with no chance to win for a very long time. The opportunity to compete for a Stanley Cup means a great deal to him.”

How does Vokoun take advantage of that opportunity? To start, he is fourth among active goaltenders in games and minutes played. Each of the three ahead of him have played in a Stanley Cup final, and two of them have Cups on their resume.  He is tenth among active goalies in goals against average, five of those ahead of him having played in a final and two of them having won Cups. He is fifth on the active list in save percentage, third in shutouts. He not only has the experience, but has performed at a high level over that long run to place himself among the most proficient goaltenders in the league.

Then there is the matter of the effect of playing with also-ran teams. In eight seasons in Nashville, Vokoun appeared in 383 games, posting a 2.54 GAA, .913 save percentage, and 21 shutouts, doing it facing 29 shots per 60 minutes. But in his last four seasons, spent with Florida, Vokoun upped his save percentage to .923 over 248 games while facing a whopping 33.2 shots every 60 minutes. Compare that to, say, Roberto Luongo, who has faced an average of 29.1 shots per 60 minutes over the last four seasons in Vancouver. If Vokoun saved 92.3 percent of that shot workload his goals against average would be 2.24. It is worth noting, the Caps gave up an average of 29.0 shots per game last season.

Fearless’ Take: Vokoun doesn’t have a save percentage lower than .919 in the six seasons since the lockout ended. Six Capitals goaltenders in that time have played in more than half the team’s games, and the highest save percentage among them was .914 – the save percentage posted by Michal Neuvirth last season.

Cheerless’ Take: Since the NHL went to a seven-game format for all playoff series beginning in 1987, only three goaltenders age 35 or older have won a Cup and recorded all 16 wins in the process – Patrick Roy, Dominik Hasek, and Tim Thomas. Vokoun turned 35 on July 2nd.

The Big Question… After having toiled for so many middle-of-the-pack (or worse) teams, are the Caps “too rich” for Vokoun’s blood?

Being very very good for teams that do not do so well in wins and losses imparts a degree of anonymity on that player. People who pay attention to the game know that Vokoun has been a very efficient goalie in terms of his own performance since the lockout ended. But the light has never shined too brightly on the NHL team on which he was playing, either. Now, Vokoun comes to a contender and is widely seen as the piece that has been missing from recent editions of the Caps – a slam-the-door goaltender. Will the increased attention have an effect? Well, it’s not as if Vokoun has come into pressure situations and folded like a freshly laundered jersey. In 2010 he was 7-1-0, 1.57, .944 in the World Championships, including a 35-save effort on 36 shots in the final, won by his Czech Republic team. He also has a gold medal from the 2005 Worlds and a bronze medal from the 2006 Olympics.

Only once in the 36-year history of the franchise have the Caps had a true shutdown goaltender who was successful in the playoffs. In the first three rounds of the 1998 playoffs Olaf Kolzig was 12-5 with four shutouts and was 4-2 in overtime games to lead the Caps to the finals. Much more often than not, the Caps have been the victim of, but have rarely had themselves the “hot goaltender.” This year, Vokoun is expected to fill that role. But not to be the iron man who has to bear the burden of 60 or more games to get to the playoffs. If all goes well, Vokoun and Michal Neuvirth might split the workload, 50-30 or so, and that could mean a sharp and fresher Vokoun for the post season. Hopefully, just in time for those last tumblers to finally click into place after 37 seasons.

Theme: “We are never ripe till we have been made so by suffering”
-- Henry Ward Beecher

Over the two seasons preceding 2010-2011, goaltender Michal Neuvirth broke in his skates at the NHL level, appearing in 22 games and posting a respectable 11-5-0 record, a 2.80 goals against average, and a .910 save percentage. But it was in Hershey where he was honing his game in earnest. Not so much in the regular season, where he appeared in only 39 games over two seasons, posting a record of 24-11-2, 2.45, .912, with two shutouts. It was in the post-season where Neuvirth established himself as a bona fide prospect. In 40 playoff games over two years, Neuvirth was 30-10, 1.98, .927, with five shutouts, leading the Bears to consecutive Calder Cup championships, and adding a Jack Butterfield Trophy as most valuable player in the playoffs in 2009 for good measure.

Neuvrith came to the 2010-2011 season ready to do battle with Semyon Varlamov to see which of the kiddie goaltenders would emerge as the number one goalie for the Capitals. Varlamov being, well, Varlamov, he was unavailable to open the season due to injury. Neuvirth seized the opportunity, appearing in the Caps’ first 13 games of the season (ok, there was that 47 second “appearance” against Boston), posting an 8-3-0 record, with a 2.41 goals against average and .914 save percentage and a shutout over Carolina. His performance propelled the Caps to a good start, and put Varlamov in a position as backup goaltender from which he would not permanently recover.

Neuvirth would go on to finish third among all rookie goaltenders in wins (27), third in goals against average (2.45), fifth in save percentage, and tied for first in shutouts with four (minimum 30 appearances). And things were looking good in the first round of the playoffs. Neuvirth, who had yet to lose a playoff series as a professional, posted a sparkling 4-1, 1.38, .946 record against the Rangers with one shutout.

But things came crashing down in Round 2. In the four-game sweep at the hands of the Tampa Bay Lightning, Neuvirth was anything but sharp with a 3.74 goals against average and .867 save percentage. Whatever his accomplishments in Hershey or promise displayed up to that point, he showed that perhaps his game had not sufficiently ripened to be that go-to guy in the post-season who makes all the stops he should and a lot that he shouldn’t in stealing games here and there in the tournament.

It was, at an individual level, a successful year for Neuvirth in that he showed what he is capable of when he puts his whole game together. But he could not put it together consistently enough when the margin for error was reduced to a sliver.

Fearless’ Take: Neuvirth finished strong, going 8-2-0, 2.17, .924, with one shutout down the stretch. And, you might think that a .885 save percentage in defending against a power play is altogether unimpressive. But it was one tick below Ryan Miller (.886), above that of the $51 million man in Philadelphia (Ilya Bryzgalov’s .881 with Phoenix), and far above the darling of Broadway, Henrik Lundqvist (.873).

Cheerless’ Take: He didn’t exactly sparkle against playoff teams. He was 7-3-2 in 16 appearances, 2.92, .900, and two shutouts (both against Pittsburgh. He was a Penguin killer, giving up only two goals on 88 shots for the season, but that meant he had a save percentage of only .877 against the other six teams in the East that made the playoffs.

The Big Question… How will Neuvirth cope with being in the shadow of Tomas Vokoun this season?

The Capitals could be the only team in the NHL this season on which both goaltenders hail from the Czech Republic. Even though both come from the northwest region of the country, there isn't that much else in common. There are almost 12 years separating them in age, and Tomas Vokoun has appeared in almost ten times as many NHL regular season games (632) as has Neuvirth (70). That kind of experience can be very valuable to a youngster such as Neuvirth, who is much closer to establishing himself as a top-tier NHL goaltender than a green prospect might be in this situation. This year could, in a way, be the goaltending equivalent “finishing school” for Neuvirth.  Vokoun could be the example for how to deal with the months-long grind of an NHL season with its ups and downs, and for how to develop the mental discipline and attitude to cope with it effectively that Neuvirth did not have last season.

It is probably unfair to refer to Neuvirth as a “backup” or the “number two” goaltender. He is more of a “1A” goalie who can ensure that there will be little or no dropoff in the event Vokoun needs a breather or is incapacitated. Last year, thirteen goalies appeared in 60 or more games, meaning that there was a clear “number one” and “number two” pecking order. This year, a 50-30 split would not be surprising with Neuvirth and Vokoun. The question will be whether those 30 or so appearances for Neuvirth will allow him to establish and maintain a rhythm, or if the frequency of appearances will be too unsettling.

We suspect that he is capable of weathering the tosses and turns of his schedule. This is, after all, a goalie that played on three different teams in one Canadian junior hockey season (2007-2008, with Plymouth, Windsor, and Oshawa) in addition to representing the Czech Republic in the World junior tournament. He split 30 games between Hershey and South Carolina in 2008-2009 before leading the Hershey Bears to a Calder Cup and winning the MVP award. Uncertainty is not a stranger to Neuvirth. And in the end, perhaps this experience won’t be viewed as much a step back as it is a chance to finally ripen into the goaltender the Caps can count on for the next decade.

(Photo: Associated Press)
\
Posted by The Peerless at 1:13 PM No comments: